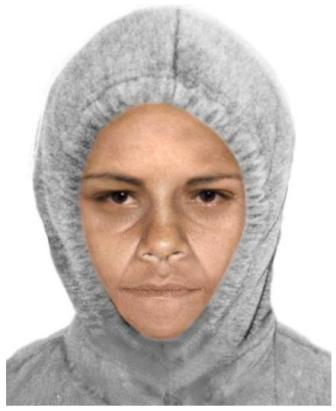 ACT Policing is seeking assistance in identifying the woman pictured below who attempted to rob the Shabby Attic store at the Carleton Shops in Kambah earlier this week (Tuesday, June 12).

About 1.30pm the woman entered the store on Carleton Street in Kambah armed with a knife. She approached the shop owner and demanded money. The shop owner refused to hand over any money and a short struggle ensued.

The shop owner managed to push the offender out of the shop and lock the door. The offender was last seen running across Boddington Circuit towards the Kambah ovals.

The offender is described as of Aboriginal appearance, about 163cm (5’4”) tall with a large build.

Anyone who may be able to assist with the investigation is urged to contact Crime Stoppers on 1800 333 000, or via www.act.crimestoppers.com.au. Information can be provided anonymously.

13 Responses to Recognise this woman?
Filter
Showing only Website comments

Apparently we are not to joke about serious matters…

Seen escaping into the sky in the front of a boys bmx.

Seen escaping into the sky in the front of a boys bmx.

Yes, I do recognise this young woman. I’ve seen her at the Winnunga Aboriginal Health Service in Narrabundah when I’ve taken my friend and co-worker in there. I don’t know her name. If the staff there were shown this picture I’m sure they’d recognise her as I have seen her there 3 times. She has that sort of sad look to her, and has quite thin arms. I’d say she would be in her really early 20s.
Now if crime stoppers was a free call from mobiles I could call them.

You can access crime stoppers online to report stuff you know and what not.

Yes, I do recognise this young woman. I’ve seen her at the Winnunga Aboriginal Health Service in Narrabundah when I’ve taken my friend and co-worker in there. I don’t know her name. If the staff there were shown this picture I’m sure they’d recognise her as I have seen her there 3 times. She has that sort of sad look to her, and has quite thin arms. I’d say she would be in her really early 20s.
Now if crime stoppers was a free call from mobiles I could call them.

I suppose that could of course be the spitting image of the offender, and maybe the store-owner is just so prejudiced that they assumed she must be indigenous because she was committing a crime. 🙁

The photofit doesn’t really strike me as “of aboriginal appearance”. I can understand the police not wanting to colour (sorry) people’s perception of the suspect but wouldn’t ,making her complexion grey or something achieve the same result? ‘Cause that picture looks like it could be any number of (Caucasian) girls I went to school with.

Seriously why not have bars inside the kambah servo and a remote locking door.
It’d be like insta-jail.

When I look at that face I don’t automatically think Steel Magnolias.

Futureproof - 47 minutes ago
chewy14 - I'm a boomer, still working. When I retire, I'm going to hit up the government to get as much free stuff as I can.... View
Capital Retro - 3 hours ago
I referred specifically to that demographic who were self-funded. I suppose it doesn't matter anyhow because you hate them al... View
Mataina Rozowsky - 17 hours ago
Of course they're rising .... Canberra's are on the move again View
Community 1

ChrisinTurner - 56 minutes ago
The fencing is needed to protect children from cars that are travelling too fast for urban areas. Join Safe Steets to School... View
Community 1

Lucy Green - 7 hours ago
I have lived in the area for a long time. These birds are definitely breeding and spreading. What started as the Narrabundah... View
David Worboys - 15 hours ago
As new comers to the suburb it was great to see these birds at first. But after seeing the number of near misses with car acc... View
George Jenson - 18 hours ago
With all due respect I agree. They are feral animals. I have seen the skinks in our front yard disappear. What about the enda... View
News 5

gooterz - 15 hours ago
The anti VAx community would have a field day with the at your own risk nonsense.. The park should be fit for purpose. It eit... View
Dallas Stow - 20 hours ago
I'm guessing that injuries have occurred to only a very small minority of users. Why close them off to all if some vetty few... View
ChrisinTurner - 1 day ago
Children need to be taught tat living in Canberra is dangerous, in particular the 50 km/hr speed allowed in residential stree... View
News 51

FoodCollective - 23 hours ago
Wonderful news, and great to hear there will be a re-opening of this Canberran food institution. Congratulations Ottoman Cuis... View
David M - 23 hours ago
The reopening was not part of the original story which has been amended since my original comment. I sincerely hope they do r... View
News 3

@the_riotact @The_RiotACT
"Love of the job" is the key to #tennis coaching according to @TennisCanberra's Club Coach of the Year Robert Jamieson https://t.co/pG4Z1vLqxP (12 minutes ago)