A cull of almost 2000 Eastern Grey Kangaroos will begin on Monday (15 June) after being delayed due to coronavirus restrictions.

The impact on vegetation of record-breaking heat and dry conditions during the past 12 to 18 months has meant the number of kangaroos in this year’s cull has been reduced. And no culling will take place in the fire-affected Namadgi National Park or Tidbinbilla Nature Reserve.

The conservation cull of 1958 kangaroos has been reduced from the 4035 kangaroos that were culled in 2019.

The cull aims to be completed by 1 August.

Nine nature reserves and adjacent territory land in the ACT will be closed during the cull. The areas will be closed in the evenings from Sunday to Thursday to allow for the safe delivery of the conservation cull, but will remain open during the day and will be open on weekends from Friday morning to Sunday afternoon.

Kangaroo carcasses from this year’s cull will be buried, as opposed to previous years when a proportion of kangaroo meat from the cull was processed into baits for use in the ACT Government wild dog and fox control programs.

The ACT Parks and Conservation Service cites the low number of kangaroos being culled and the high cost of commercially processing the carcasses as the reasons for burying the dead animals.

However, the ACT Government has commissioned a paper on carcass utilisation options that will be completed by Spring this year.

ACT Parks and Conservation Service Director Justin Foley said there will be no cull in the fire-affected Namadgi National Park or Tidbinbilla Nature Reserve, or other reserves were impacted by bushfires. The cull will also comply with health requirements related to COVID-19.

“We have modified the 2020 program to ensure it complies with COVID-19 protocols and to reflect that more people are currently using our reserves due to pandemic restrictions.

“We are confident this number will let us achieve high animal welfare and priority conservation outcomes while maintaining public, staff and contractor safety,” Mr Foley.

Mr Foley said kangaroos are an integral part of the ecosystems around Canberra.

“We hope the community will understand that the conservation cull is vital for the wellbeing of the environment and the many plants and animals that call our reserves home. Research demonstrates that overgrazing by kangaroos, particularly in critical conservation areas, can threaten the survival of local grassland sites and species.

“Although the grass is green due to recent rain, the ecosystem is still fragile. The animals that rely on the grasses for food, shelter and breeding purposes, including several endangered species, are still recovering from extended hot and dry conditions.

“We must continue to manage kangaroos to reduce grazing pressure and help our nature reserves maintain resilience against the effects of climate change into the future.”

The Canberra-based Anti-Speciesist Action Collective says they oppose the culling of a fellow sentient being on moral grounds.

“The ACT Government has made numerous claims as to their reasoning for the annual massacre, however, these do not hold up to scrutiny,” a spokesperson for the group said.

“They have claimed that there is an overpopulation of kangaroos despite having no consistent way of even measuring populations, and with independent ecological analysis finding no such overpopulation.

“They also have claimed that the kangaroos’ grazing is impacting biodiversity despite the CSIRO reporting the opposite.”

Mr Foley said all shooters adhere strictly to the National Code of Practice for the Humane Shooting of Kangaroos and Wallabies for Non-Commercial Purposes.

“Nobody likes shooting kangaroos, however, we accept it’s the most humane method of kangaroo population management available to the ACT Government as a responsible land manager.

“To help improve public safety and detect illegal activity, warning signs will be placed at all entry points to the reserves, surveillance cameras will be used and reserves patrolled by Parks and Conservation Service staff during culling operations.

“If you see anyone vandalising or removing warning signs or doing other illegal activities that put the public in danger, please call Crime Stoppers on 1800 333 000 or Access Canberra on 13 22 81,” Mr Foley said.

More information on the cull and detailed closure times are available from the ACT Government.

Shoulda got it done during the lockdowns, so the protesters could also be booked for ignoring the covid restrictions.

The line that there is a “High cost of commercially processing the carcasses” is an outright lie. Pay commercial shooters and they will put the carcasses into one of the several processors for free, and get paid for the weight of the animal. The actual issue is that commercial meat harvesters don’t want to work in the ACT due to the ridiculous regulations and making them liable for even other peoples stupidity. The people who do undertake the cull here are pest controllers who are willing to take that risk for a few bucks, rather than commercial shooters. I know a heap of commercial shooters who shoot just over the border, yet won’t shoot in the ACT because of the liability issues. Not worth the hassle. 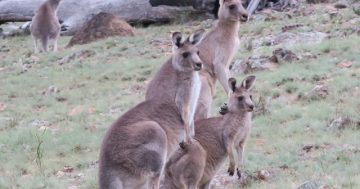