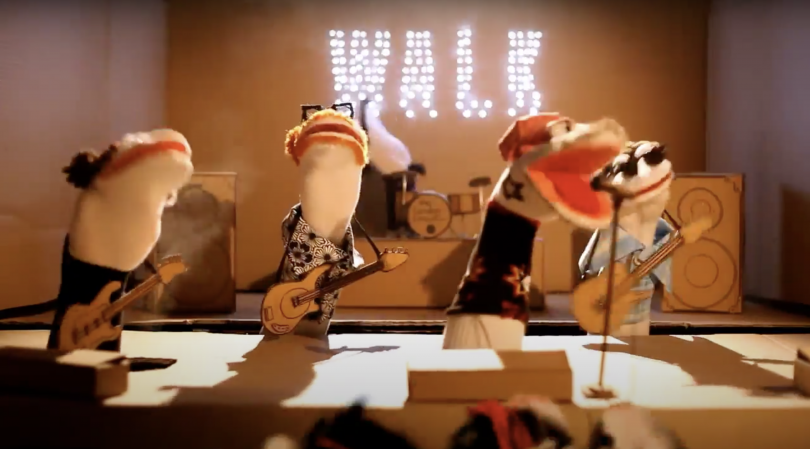 With online attention spans shrinking across the board, the unexpected demise of the music video is real and it’s here. It means that the wackiest and most wonderful offerings from Canberra’s musicians risk being lost to history. For posterity, we’ve gathered together some of the most memorable and quintessentially Canberran clips from the far reaches of the internet.

‘I Want It All’ – Teen Jesus and the Jean Teasers

From the meta-narrative taking place through captions to the psychedelic vampire Jesus section, this clip has everything. The not-at-all-official music video for ‘I Want It All’ was pulled together in 24 hours for local film night JumpCuts using stock images and a copyright-free sequence from the 1922 silent film Nosferatu. Co-Director Mike Greaney said of the clip: “As a result of a very dubious audience poll, we won $100. This is the first award I have ever won for filmmaking. Sorry in advance to the band.”

‘In From The Outside’ – Julia and the Deep Sea Sirens

Inside her floating house, Julia sets out to track down her bandmates lost amidst a starlit sea. The papery, animated waters and delightful anachronisms (like a two-way radio and wooden captains wheel) make the scene all the more dreamlike as Julia rescues her crew one-by-one. It all speaks to a distinctly late-2000’s kind of wide-eyed, nu-folk whimsy. File this right beside Lisa Mitchell sitting in a washing machine and Josh Pyke sailing a guitar boat around the harbour.

Belonging to the days before YouTube (and well before Spotify), ‘Lo-Fi’ sees a swarm of insects plotting revenge against a sleeping human. A deep sense of compassion for the bugs is established through a series of flashbacks in which a misunderstood spider is squashed and an unsuspecting roach is trapped in an upturned water glass. Oh, and the bugs play a gig with safety pin guitars and a microphone made out of a Redhead match. What a way for one of Canberra’s most influential bands to immortalise themselves.

‘Round and Round’ – Super Best Friends

This Super Best Friends clip feels more and more dystopian by the day. With cameos from the likes of Clive Palmer, Tony Abbott, and then-Prime Minister Kevin Rudd, the ‘Round and Round’ music video marks the highest degree of parliamentary access ever afforded to a local punk band. Politicians and political insiders play along throughout the clip, giving us their best ‘dance moves’ and theatrical… gestures? Given everything that’s happened on Capital Hill (and indeed the world) since 2013, it’s hard not to watch this now without the sense that you’re intruding on a group of Martians trying and failing to act like humans.

As a medium, the music video is the perfect landing spot for all those ideas dubbed too silly, too one-dimensional, or just too weird for a longer film. Cue ‘sock puppet rock concert’. You could argue the imagery is an allegory for the subjugation of artists under major labels, or that the pull away shot to the band operating the puppets is a commentary on shaping one’s narrative in an oversaturated music industry. But neither is true. ‘Walk’ is just plain fun, and that’s the beauty of it. The exasperated sock puppet sweeping up the party popper remains at the end gets me every time.

We need more venues like the old Terrace Bar and the Civic Youth Cafe.
https://youtu.be/f54YUCuFIAA

What about Bloke by Chris Franklin which was filmed in Bonython?

The omission of the iconic Drive Through Bottolo by the VeeBee’s is unforgivable.