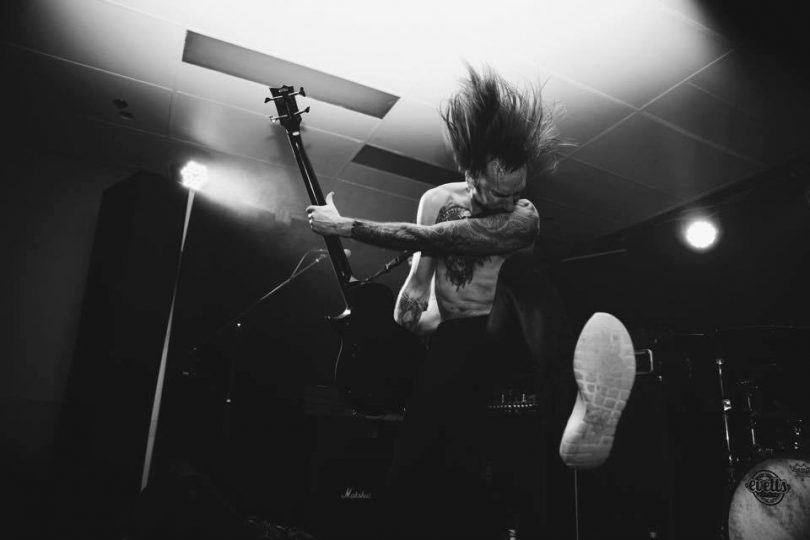 Remember the days when people would congregate together in groups to observe live music performances? These events were often referred to as ‘gigs’ and took place in specially equipped spaces known as ‘venues’.

Distant memories aside, something that has become abundantly clear since the beginning of the COVID-19 crisis is just how precious music venues are to the communities they host.

Even before 2020, music venues would typically operate on tight margins, and seeing a beloved music space fall victim to financial strain, property development, noise complaints, licensing issues, or just plain bad luck was sadly all too common an occurrence. It’s high time we talked about some of the legendary venues whose doors had to shut for good in recent years.

It doesn’t get more ‘underground’ than actually being underground. Magpies was a nursery for Canberra’s punk bands in the mid-2010s. It was a place where newcomers would brush shoulders with touring international heavyweights.

Magpies sported two stages and the best sound in town. It was also ideally located, hiding beneath the floor of Gus’ in Garema Place. The cavernous space has been vacant for several years now, leaving a Magpies-shaped hole in the city’s punk scene.

Who played there: AJJ (formerly Andrew Jackson Jihad), Azim Zain and His Lovely Bones, The Smith Street Band.
What it was like: Watching your friends play to a warm, nurturing audience and then trying not to make eye contact with the pokie players on your way out.

Perched high above Lake Ginninderra was La De Da. The upstairs bar took on many forms during the year, playing host to intimate jazz nights, multilevel music festivals, internationally acclaimed DJs and beatmakers, and many a Groovin The Moo afterparty.

La De Da was a shining beacon of creativity in the Belconnen Town Centre, operating on the simple principle of letting creative people do their thing. You were just as likely to encounter an experimental event format inside its art-adorned walls as you were a bustling party that spilled into the carpark.

Who played there: TOKiMONSTA, Teebs, 30/70.
What it was like: Watching some of the world’s best beatmakers and momentarily forgetting you weren’t in LA. 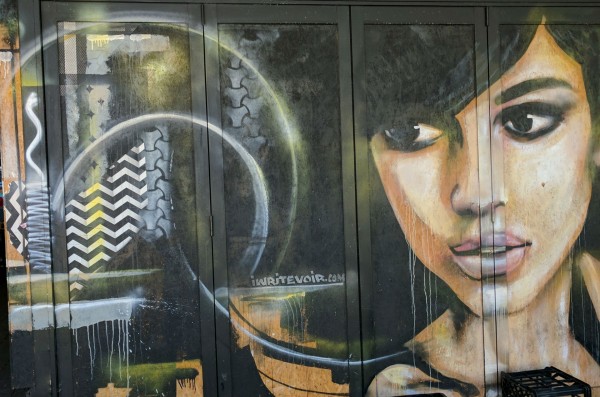 LoBrow Gallery & Bar could be found up a narrow staircase in Garema Place. Photo: Supplied.

Another venue that found a home in a vacant room in Garema Place, LoBrow was all about showing off what Canberra’s artists were capable of. The bar was adjacent to Sancho’s Dirty Laundry and the gallery space was continually filled with work from local artists.

It all came together in a cross-disciplinary melting pot of creativity that became the go-to spot for single launches and parties. Later on in its lifespan, it brought a tear to the eye to walk in and see photographs of local songwriters adorning the walls.

Who played there: RAAVE Tapes, Hoodlum Shouts, Drawing North.
What it was like: Climbing up the stairs next to Beach Burrito Company for the first time, not knowing what to expect and being greeted by fairy lights criss-crossing the room and local art on every wall. 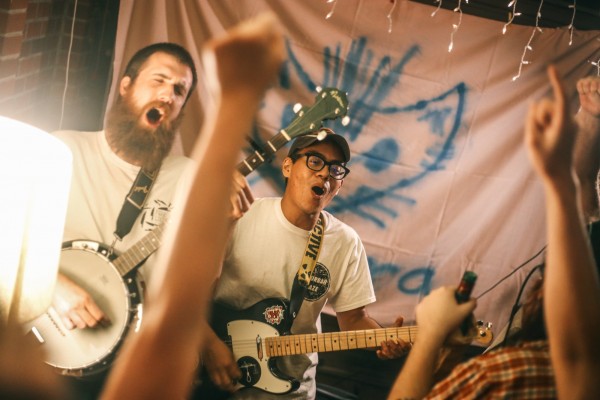 Jim Dusty and Azim Zain from Azim Zain and His Lovely Bones do a duet at a Mulgara gig. Photo: Dave McCarthy.

Tucked away in an inner-north suburban street, the carport of this unassuming house was like a warm, cozy blanket for Canberra’s music scene. DIY collective Mulgara would run regular house shows here, providing a safe and nurturing environment for the city’s musicians and music-lovers to thrive.

Whether you were there for a Sunday afternoon acoustic set, or a mid-winter Saturday night gig with mulled wine in hand, you could expect to catch your favourite local bands alongside acts from interstate who were following the house show trail up and down the east coast.

Who played there: Ben Stewart (Slowly Slowly), Rachel Maria Cox, Carb on Carb.
What it was like: Screaming your lungs out to Anticharisma by Azim Zain and His Lovely Bones and warming yourself by the fire in between sets.

There was The Stakeout in East row, upstairs in the early 80’s. Live bands twice weekly. Was always a blast.

From another perspective I want to give recognition to the management and staff of both Magpies Civic (Aaron & Tim 2013-2015) and Lobrow (Sancho and Vinnie** 2016-2017) for being awesome, supportive, helpful, fun and great people to get along with. They made it fun and easy to run events there. It’s sad that both venues weren’t able to continue; a big loss to Canberra. In context the staff at some of the venues I’ve hosted events seemed like they didn’t like their jobs.

** Memory tricks me but I think it was Vinnie could have been Vince and he was like the best barman I’ve come across: radiant good vibes and a joy to work with.

Thanks for the praise. Was a pleasure bring big and small bands to the masses sometimes 4-5 die hard fans. Many fond memories and so many amazing people and bands. Honoured to have been a part of the scene as short lived as it was.

Has motivated this list below of imho the most iconic ‘underground’ Canberra music venues I recall, that featured ‘alternative music’ including live music.

The Civic & Woden Youth Centres: these played a vital role in the late 80s and early 90s; from memory it seemed there were gigs at them every weekend; mostly punk n metal; local, national and even international artists played there.

The ANU bar & refectory for decades up until 2017; throughout the 90s they hosted 100s of international, national and local alternative music artists; gigs every weekend and often during the week. From hazy memory there was usually a big alt-music act (national or int’l) at least once per month, for many years in the 90s.

The Terminus bar: in the early 90s.

The Base (Manuka): early 90s was the place for electronic dance music.

The Gypsy bar: late 90s to early 00s; first in the space left by the Terminus, then later where Fernwood gym has been.

The University of Canberra refectory (Belco): late 90s and 10s.

All in Civic ‘cept where noted.

Who remembers the Shanty under what was Lovett Tower in Woden?

Now there’s a name. You almost had to be working in Woden. It was downstairs at the side of the Tower facing the Square. Now long since been filled in, so no-one would remember its site. I’d suggest.

The Green Room at the Henry Grattan Tavern, Phillip.

Now that was a while ago, and anyone remembering it might be letting their age slip out by showing they attended.

Terminus tavern…. I found a home for a little bit .

Paul South so did I, worked there for 5 years. Late 1990 from memory on a Tuesday evening (tight arse Tuesday at the movies) a busker came in and asked if he could play. I thought sure. We ended up having such a big night I pushed the owner to start getting gigs in. Glad so many enjoyed the good times, I know I did.

Those of us old enough remember The Terminus in Civic. Heck, even Mooseheads hosted some live entertainment in its first years.

Later renamed The Gypsy (had to Google that). I loved that place. Closed down in 2001 apparently.

Lin Van Oevelen I thought Gypsy Bar was different – weren’t the Termo and Gypsy even open at the same time for a little bit? I thought Gypsy’s front door was somewhere near the newsagent in Garema Place/East Row. Termo was downstairs next door to Phoenix.

Gypsy closed because they lost the fight over the noise complaints from their first location and it cost them a bucket. Remember seeing Kim Salmon & The Business, Whopping Big Naughty, Bernie Hayes, Godstar and so many others there!

It always amazes me that live music is apparently too noisy but no problem with the doof doof music that comes out of today’s venues.

Emma Davidson Yep, definitely different. My fav Termo memory, was the afterparty from a Violet Femmes concert and for Gypsy (mark 2 – the basement version) a magical performance by Leonardos Bride. There were some great old venues – also miss the ANU