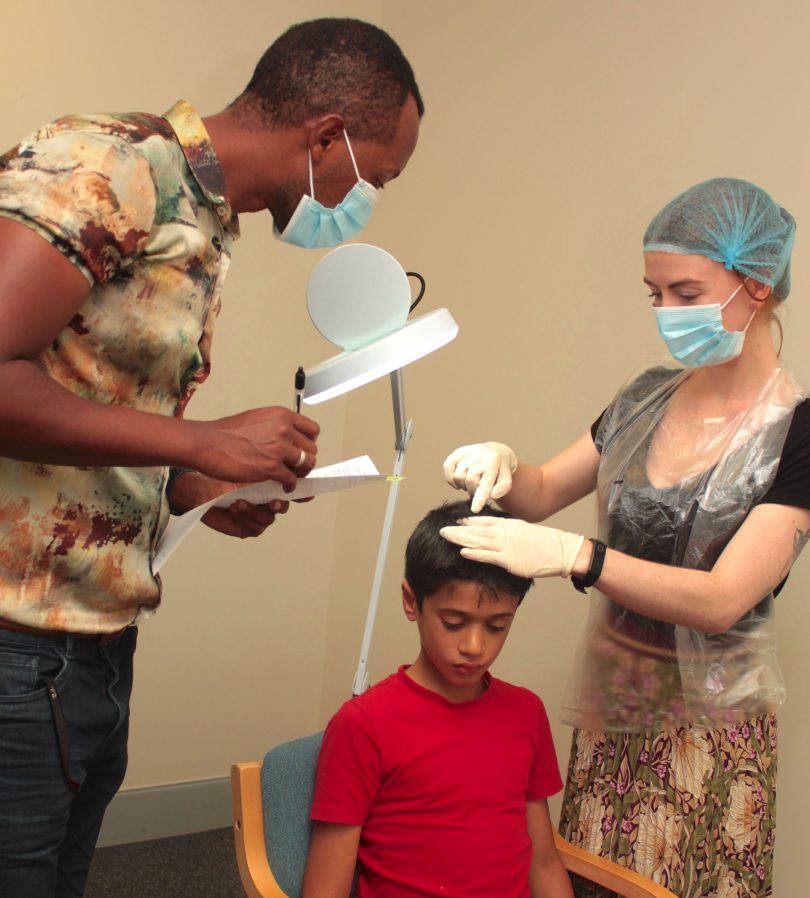 Researcher at University of Canberra Wubshet Tesfaye (left) and an assistant during the head lice trial. Photo: Supplied.

There would be few families with children who aren’t aware of head lice and it’s a problem a team of researchers at the University of Canberra is taking on to find an effective natural treatment in place of chemicals which they claim are ineffective.

“There are references to head lice in the bible and still, one in five school children are likely to become infected with them,” said lead researcher Dr Jackson Thomas who is an Associate Professor in Pharmaceutics at the University of Canberra.

“Head lice can infect anyone and there is a huge amount of data showing head lice are resistant to almost all chemical treatments.

“Our research of nearly 200 people also showed that 79 per cent were in favour of more natural treatments for the problem.”

Dr Thomas first took a fine-tooth comb to his research of head lice in 2014 and said head lice eggs return after two weeks of the first treatment.

Their clinical trial is led by post-doctoral researcher Dr Wubshet Tesfaye, who also found the need to tackle anti-microbial resistance of head lice eggs to chemical treatments by using natural essential oils that have multiple advantages over synthetic chemicals eggs which perform poorly due to increasing resistance to lice. 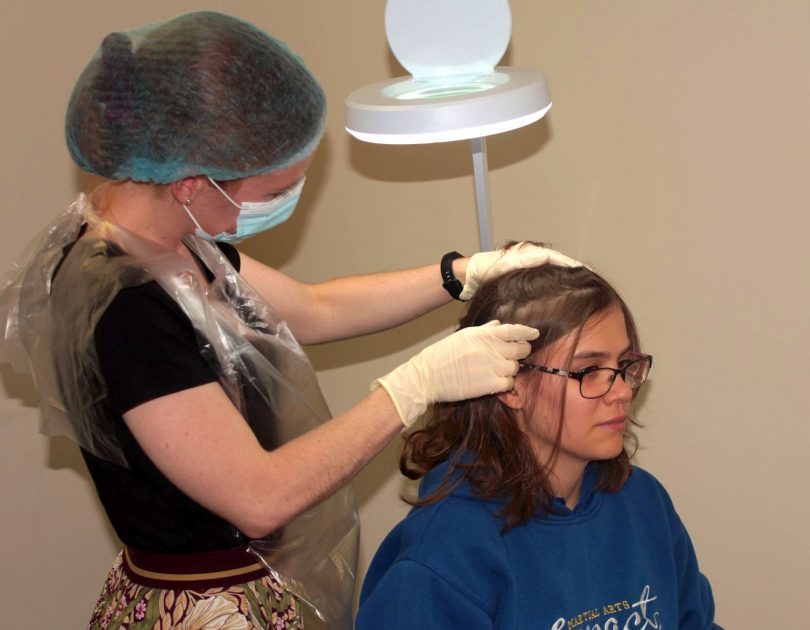 An assistant in the clinical head lice trial treats a participant in the study. Photo: Supplied.

Lice can be found on combs, hairbrushes, hats and pillowcases but will only spread if used immediately after use by an infected person. Head lice do not live on furniture or carpet.

An adult louse is about the size of a sesame seed, has six legs and is light to brown in colour. Females, which are larger than males, lay nits.

An adult louse lives up to 30 days on a person’s head and currently the only natural treatment is a fine-tooth comb.

“I’ve heard of parents dousing their own and their children’s heads in kerosene, which has obvious risks, so we’re very keen to find out if a natural remedy is more effective,” Dr Thomas said. 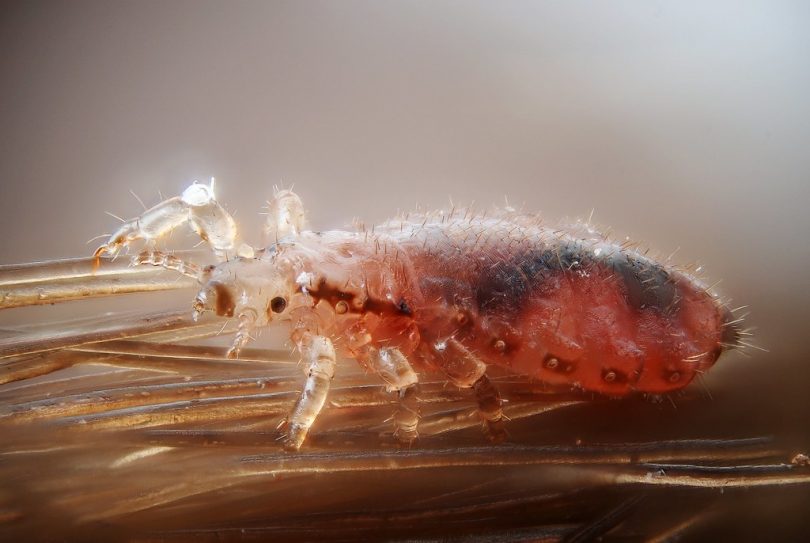 One in five school children will become infected with head lice. Photo: Supplied.

Dr Thomas said the treatment was a natural, plant-derived, environmentally-friendly, non-pesticidal treatment and is so far showing excellent results.

Their study of a natural treatment for head lice has also undergone a series of independent safety evaluations involving cell-based animal and human studies that have received approval from the University of Canberra Human Research Ethics Committee.

They have used human head lice and those found in sheep and have tested them on mice to demonstrate the natural treatment’s sensitivity to skin, especially the eyes.

The researchers are also seeking more people to participate in a clinical trial which involves two treatments during a two-week period.

The treatment is free and the only prerequisite is that the person must have active head lice. The researchers especially welcome school-aged children aged between 5 and 16 years.

Dr Thomas also said there is a massive amount of stigma attached to people with head lice.

“The stigma is that you are not clean,” he said.

“There is also no evidence to suggest that people with clean or oily hair are more susceptible to having head lice.”

The clinical trial is still in its early phase, and if you would like to be involved, email Headlice.Research-UC@canberra.edu.au, or book an appointment via the head lice trial calendar.

Tea tree conditioner does the job.

white vinegar… my kids brought headlice home once.. I combed their hair with white vinegar every day…removed the lice and made their hair shiny and soft… washed everything with a bit of vinegar in it… never had the problem again…

are you saying that the vinegar made their hair immune to lice?

you would think the lock downs earlier last year when schools were closed would have almost eradicated lice?