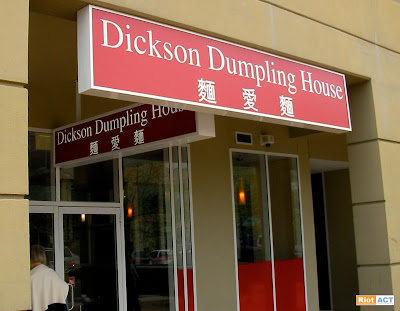 For some time now I’ve been watching the refit of Dickson’s old frozen custard joint on Cape St with a great deal of interest.

What new culinary delights would emerge?

Yesterday a friend and I went in for lunch and, wow!

The peking duck pancake I had as an entree was astonishingly good, the skin perfectly crisped.

The tea was also a very pleasant surprise. This is proper chinese tea with flowers, bits of bark, and seed pods, not just tea leaves.

But when eating at a dumpling house it’s all about the dumplings right?

They did not disappoint. These are not coming from a freezer bag. There’s a team of small Chinese women on display beavering away in the kitchen making them by hand and it really shows in the wonderful delicate and juicy dumplings they produce.

If you’re a fan of the form check it out.

It’s not a bad bet for diners on a budget either. Some of the serves come as cheap as $6.

Make sure you ask for some chili and soy sauce with your dumplings though to get the flavours really sparked up.

They’ve also got an extensive Chinese restaurant menu, but there’s only so much that can be sampled in a single lunch.

I’ll definitely be going back soon.

They delivered my husbands main and seemingly forgot mine – he got halfway through before I could get their attention and they told me my meal was coming. 10 minutes later I told them to cancel my meal, they went to the kitchen and told me it was ready now so could I please wait a moment, then it was another 5 minutes before they brought my main out!

On the bright side, I’m now keener to try the Shanghai Dumpling cafe.

We went there a couple of weeks ago and the service was shocking. The food was pretty ordinary also. I will be saving my dumpling fixes for my trips to Sydney

The Dickson Dumpling house has , in my humbe opinion, the BEST Peking Duck in Canberra. The succulent meat and super tasty sause is just divine. At the the dumplings are a real treat too. We have been there each week since it opened. The prices are reasonable and the quality excellent. My Tips
– peking duck
– eggplant hotpot
– any of the fried dumplings with soy and chili sause – yum
PS: to those above noting service failing, there a grain of truth. There have difficulty with getting the galsses and wter bottle even after numerous requests. Best ot go with the tea (which is tasty and hydrating).

The Shanghai Dumpling Cafe is also very good for Chinese food and also cheap – under $15 per head (and provide oolong/pu er tea, rather than jasmine). They have ‘shanghai dumplings’ which are (sort of?) xiaolongbao, but they are only little (not the big ones that you can get in China). However, they do have the soup/broth inside them. Try the cucumber and garlic (cold dish) – no one will talk to you for days, but worth it. Also the rice cake dishes (actually kind of a noodle, sticky and glutinous. Yum).

MsCheeky: I was told by a friend of the owner that they have xiaolongbao at the Shanghai Dumpling Cafe, the new place on Childers Street under Kinloch Lodge. Couldn’t see them on the menu when I went, though, so maybe not for the rest of us.

Johnboy, it’s probably a bit of an ask, but do they have shao long bao (a shanghai specialty dumpling)? They’re absolutely my favourite dumplings, and I’d make the trek from over the border to eat them.

it’s ok, busgirl. she never attacked a dumpling to which she hadn’t been introduced… ; )

walked the dog past here the other day

Better not tell Dogwalker that…he might have a friggin’ fit….

I wrote the review for an audience that already knows that round-eyes do not get good service at cheap, tasty, chinese joints.

It’s not racism, it’s just that we’re hard to understand pains in the arses to them.

If you’re unfamiliar with that trade-off then perhaps best to give it a miss.

walked the dog past here the other day and rejoiced – will give it a midweek lunchtime takeaway go, ta for the review jb…

is this related to the dumpling house in west civic on childers street? the dumplings there were excellent, though the noodles left a little to be desired (not the serve size, though)

Tried it out last night on the basis of this post. Food was great (and red vinegar sauce definitely worth asking for with the dumplings, which were beautifully prepared and delicious) and tea as JB described.

We were quicky greeted, seated and served, but had to wait a while to pay – in fact we could have walked out without anyone being any the wiser even though we asked for the bill several times.

The two of us ended up with two plates of dumplings, one main to share, rice and tea for $50.

I asked the manager how it was going – she commented that the first week had its share of problems but that the place was finding its routine’- we did notice one particularly hapless waiter (not ours, fortunately). He was (sort of) trying but it was clear his head wasn’t on the job – 3/10 for service but 8/10 for entertainment 🙂

haven’t eaten at the dumplings place (did you notice that the vego options were like there johnboy?) but my partner and i were at little thailand (which by the way is FANTASTIC!) right next door one night for dinner last week and someone must have over-crisped the perfect duck pancake on that occasion because all of a sudden a fire alarm screeched through the entire building (ie the alarm isn’t localised to the business which sets it off) and the fireys went dashing into the dumpling kitchen before the sirens were thankfully switched off 🙂

Sorry, we tried this place tonight and walked out. After 20 -30 minutes of no service waiting patiently, we went up to ask for some glasses for our wine and after 5 mins standing there why the staff ignored us, we left and went next door. Not sure what the food is like, but we will never find out. Trying to support the new locals, but back to the old tried and tested.

Well I can hardly claim to speak for the joint or to have knowledge of all your circumstances.

But in my own experience the service erred on the side of over attentiveness.

You own mileage, of course, can vary.

Sorry, we tried this place tonight and walked out. After 20 -30 minutes of no service waiting patiently, we went up to ask for some glasses for our wine and after 5 mins standing there why the staff ignored us, we left and went next door. Not sure what the food is like, but we will never find out. Trying to support the new locals, but back to the old tried and tested.

I think the type of tea you were drinking was Shao Mei… or maybe a form of chrysanthemum. At other restaurants you need to ask for particular types of tea, rather than just saying ‘tea’. It’s still assumed that Guilo (rude cantonese name for non-chinese) just want Jasmine, so if you like it next time just ask. Also quite easy to buy at Chinese supermarkets.

But think I might try it out, thanks for the review.

Andrew Kenna - 8 minutes ago
nope just take a look at nsw, the amount of times cops are assaulted and the courts dismiss the charges... mandatory sentence... View
Property 1