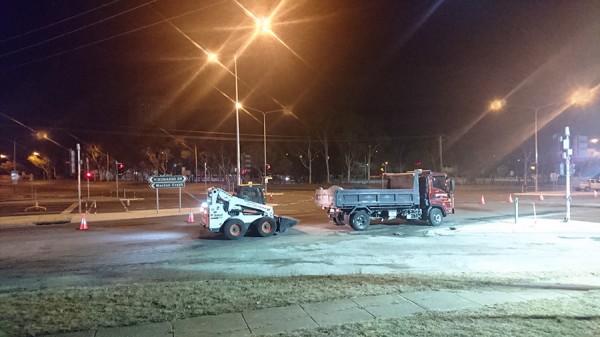 A week ago, I and all my neighbours received a letter from ACT TCCS (Transport Canberra and City Services), to advise of night time resurfacing work at the Intersection of Hindmarsh Drive and Melrose Drive, as well as Melrose Drive and Brewer Street, Phillip. The work is taking place between February 17 and 19, between 7pm and 6am each night (except for the night of the February 10 and 11). While the work is taking place, the speed limit is reduced to 40km per hour, temporary lane closures are in place, and traffic controllers are on sight each night to assist local motorists to access their homes and businesses during the hours the work is taking place. Minor delays are to be expected during these times, as I observed myself last night, due to construction vehicle movements and the like. According to one of the friendly workers I spoke to briefly, what they are specifically doing is called Profiling or Milling, which according to Wikipedia: “is the process of removing at least part of the surface of a paved area such as a road, bridge, or parking lot. Milling removes anywhere from just enough thickness to level and smooth the surface to a full depth removal”. This involves recycling the top layer of road, as opposed to just putting a new layer down on top, which keeps the road height the same overall and is better on the environment than resurfacing the entire road. I am advised the work is currently on schedule and expected to be completed Thursday night as scheduled, but if you are travelling through this area between 7pm and 6am at night during this week, consider an alternate route if you don’t want to be delayed at all. After the resurfacing is done line workers will be out in the wee hours of the morning chalking new lines and burning them in with the massive ‘flame cannons’ they use for this. Last night (Tuesday night), they had Melrose blocked off from both directions crossing Hindmarsh, and only 1 lane open per side on Hindmarsh itself crossing Melrose, with the lights on permanent yellow flashing most of the time. I saw some significant (5 minutes plus) delays a couple of times when I was heading out and coming back in my car, while they had constuction vehicles moving across the intersection itself, and the traffic banked up to 20+ cars deep waiting to cross. I gave the friendly road crew worker I had spoken to my business card and told him the piece I had been taking pics for did go up, and he told me they are still on schedule and should be finished Thursday morning.

The dates in the piece above should have read “The work is taking place between February 9th and 17th”, not 17th and 19th – apologies for that, I don’t remember seeing that when I reviewed before submitting but obviously that’s what I typed, so sincere apologies for that. The start date in the pictured letter is correct and when they started.

Tuggeranong Parkway down to one lane due to bridge work

@The_RiotACT @The_RiotACT
The @NFSAonline has unearthed a rare recording of a @ledzeppelin interview that features in a new documentary on the legendary rock band https://t.co/YSn9EwPTIR (26 minutes ago)