Returning to the Blue Sullivan 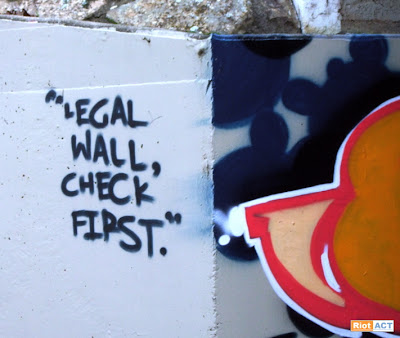 Back in 2005 a friend and I trekked through one branch of Sullivan’s Creek from its Dickson College headwaters to the lake.

The new site design has broken my layout, making orphans of the text and rendering it even more peculiar than it might have been in context. But the pictures are still a good reflection of what the cave-dwellers were daubing on the walls three years ago.

Since then much of that record has been eliminated by zealous clean up crews.

But Saturday was a lovely day, I had new boots to break in and a new camera to come to grips with.

So for those interested here’s a similar excursion. Be warned there are images and language that some may find offensive.

Question: Who or what are LCS?

We managed to walk through the pipes from near Spence shops all the way down to Gininderra Creek when I was younger all a good laugh.

How can Jackson Pollock be vandalism? Shit and vandalism are not the same thing.

I was never a fan of graffiti art until we had the walls of our workshop done and it is amazing. If only I could work out how to put pics up here.

I would say that some Jason Pollock is disgusting vandalism. But then again, others appreciated it and see artistic merit.

I have to agree with niftydog, it depends entirely on the piece, and where it is.

If it’s on private property and without the owners permission, it’s vandalism no matter how amazing it is.

Same photographic selection both times (I was there)

I think the old set was an accretion over a much greater period of time though.

There’s several distinct types of graffiti, and to lump them all in together is sacrillicious – so I had to have a bet each way on “art” and “vandalism”.

The pubescent teenager obscenities are just pointless vandalism and unfortunately that and ‘tagging’ is all that most people imagine when they think of graffiti. The impossible-to-read “graffiti-gang” type is sometimes technically brilliant, but rarely floats my boat. Then there’s genuinely inspired artworks and stencils that range from just plain humorous to utterly beautiful and thought provoking.

Some of the artworks in the 2005 post were absolutely brilliant, but I see less of that type of work in the new pictures. I wonder if that’s because there’s less of it around, if it’s just in other places, or perhaps holds less interest to the photographer.

On a somewhat related note – anybody else notice the blank canvass of fences our clever government provided for the ‘pointless vandalism’ type along Baldwin Dr in Kaleen? The contractors came along and cut down hundreds of tress and shrubs, exposing a pristine row of fences to the passing traffic. In less than a month, almost every single panel on every single fence has been tagged by muppets. If I lived there I’d be fuming!

re the poll – until we have a dragway, let them decorate the drain walls, by all means…

Legal walls haven’t changed that much since the last time, plus illegal is always more interesting…

I will neither confirm nor deny this statement 🙂

Legal walls haven’t changed that much since the last time, plus illegal is always more interesting…

is a bit passe these days.

Shoul dhave gone to the ANU end of sullivans Ck – plenty of quality work there on legal walls – my brother also tells me that my name has been appearing on many woden productions of his, a tribute somewhat.

The photo above reminds me of the time Pratt brought the media out to document his single handed blow against graffiti…only to find out he had painted over legal graffiti done by a local woden community group.

My favourite of the drivel in the above slide show was the argument over whether someone had the ‘tacco shits and was a nazi rabbit’. A frightening thought.

Some quite amazing real graffiti in the slideshow though. It’s a shame some pillocks have to ruin it for legitimate artists.

Finally Relented - 52 minutes ago
Ashley Wright yeah. Know that. Lived here all my life pretty much. They don't work any more. Much better 10-20 years ago. Pla... View
Ol L - 18 hours ago
Maybe if we do nothing another government will be in power when it all blows up, so let’s do nothing in the meantime View
Ashley Wright - 18 hours ago
Sally Greenaway found the article. https://www.cityservices.act.gov.au/roads-and-paths/traffic/trafficsignals/drakeford_drive... View
News 51

@The_RiotACT @The_RiotACT
Prince Philip has been remembered for a life of service, and Canberra's carriage-driving fraternity recalls a fierce competitor who inspired a future world champion https://t.co/o0qMJekdNQ (19 minutes ago)