Robbed at knife point in the Emu Bank Maccas 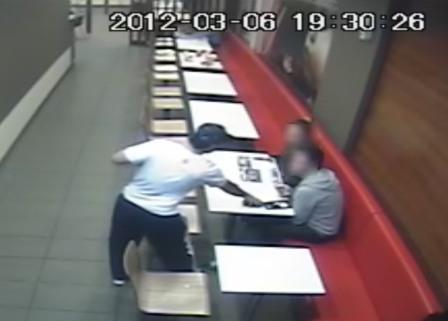 ACT Policing is investigating a second aggravated robbery in two days where it is believed the same offender is involved.

About 7.30 pm last night, a man and woman were seated in the McDonalds restaurant in Emu Bank when they were approached by a man with a knife.

The offender threatened the pair before fleeing with the phone and wallet of the man.

The offender is described as having an olive complexion, between 30 to 40 years of age, approximately 173cm to 178cm tall (5’8 – 5’10”) with short dark-coloured hair and a medium build. He was wearing a dark cap, white shirt with blue writing on the front, dark track pants and white shoes.

The offender was seen to get into a white, early 2000s model Toyota Corolla hatchback with chrome hubcaps/wheels.

Anyone who may have witnessed the incident or is able to assist with the investigation is urged to contact Crime Stoppers on 1800 333 000, or via www.act.crimestoppers.com.au. Information can be provided anonymously. 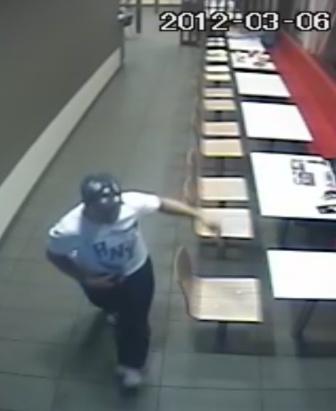 No, the burglars are better at Hungry Jacks.

No, the burglars are better at Hungry Jacks.

Total take would be a few dollars cash and instantly cancelled credit cards. It makes no sense at all.

And the penalty if caught is probably a suspended sentence.

Some people just need shooting, and this is a case in point.

This is a crazy person. Armed robbery in a well lit public place in the early evening under many surveillance cams with other people such as the staff members readily to hand. All that risk, for everybody involved, to get away with a phone and a wallet? Total take would be a few dollars cash and instantly cancelled credit cards. It makes no sense at all.

I hope he slips and lands on his knife.

Ummm, where were the Guardian Angels? I though that they were meant to stop this type of thing.

Ummm, where were the Guardian Angels?

They thought the burgers were better at Hungry Jacks…?

Ummm, where were the Guardian Angels? I though that they were meant to stop this type of thing.

Emu Bank, as in Belco?

Inside the actual eatery??
(seems like it, 4 photos of offender available from AFP page)

When the Hamburglar hears someone is muscling in on his turf there will be strife.

But did he take the pickles as well?

No. He had fries with it instead.

But did he take the pickles as well?

Ali Geez - 4 minutes ago
Russell Nankervis our ex-PM once said ‘mum and dad should chip in for their kids’ View
David Graham - 48 minutes ago
Is it on stalled or installed? View
Russell Nankervis - 7 hours ago
As if students could afford an apartment that close to the Parliamentary triangle View
Community 5

Robyn Jones - 30 minutes ago
Where is it located View
Monica Tiffen - 53 minutes ago
I find it hard to put a light-bulb in!!!!! View
Michelle Langsam - 4 hours ago
Lucy Baker. For any of your tribe ? How cool is this View
Community 42

Peter Major - 1 hour ago
Hugo Young Ride in single file and comply with ALL road rules, do not impede the flow of traffic and there are minimal proble... View
Kirby Haines - 2 hours ago
lol sure, costs 10x in admin what it would recover in revenue. Where do you draw the line? Are you going to insist some gorml... View
Hugo Young - 3 hours ago
Adam Jovanovic I'll be sure to suggest to my cycling club that we start running groups rides on paths. A group of 15 people t... View
Opinion 53