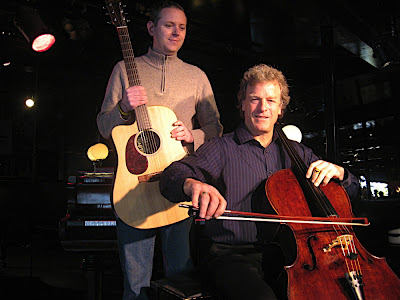 Self–taught acoustic guitarist and storyteller, Duncan n. Sargeant and classical cellist, David Pereira are two musicians from vastly different backgrounds. For one night only, they will team up to present a bill of classical music, pop tunes and original compositions in support of Mental Health Week.

Sargeant is a prolific local songwriter and performer. He has released one self-titled solo CD of his own tracks and has an instrumental album pending release later this year. He is currently studying for a diploma of music at CIT. Sargeant lives with mental illness on a daily basis. In his late teens he was diagnosed with schizophrenia and depression. He is now in his early thirties and has been managing this illness for nearly half his life.

This will be the sixth annual concert that Duncan has initiated and performed in for Mental Health Week. From day one these concerts have been supported by Belconnen Community Centre’s Arts and Mental Health programs. Sargeant says the idea behind the concerts is to, “challenge the stigma surrounding mental illness – to inform people that mental illness is not a big bogeyman to be worried about.” David Pereira’s impressive credits include seven years as Principal Cellist of the Australian Chamber Orchestra and eighteen years as senior lecturer at the ANU School of Music as well as an extensive catalogue of CD releases.

Sargeant and Pereira met five years ago when they shared a room in Calvary hospital. Pereira was seriously ill at the time and had stopped playing cello. He says, “Duncan was practicing all the time – I got to listen a lot. It was clear to me that he was a true musician.” David Pereira has been well for some years and since his recovery he has become a patron of the ACT Mental Health Foundation and an advocate for greater education and research about mental illness, particularly Obsessive Compulsive Disorder (OCD) which he describes as “reasonable concern gone mad to the point where it can be life threatening.”

Pereira says, “Making music can be a very healthy activity. Duncan and I both know about playing to get well.” On October 10, Pereira and Sargeant will play several duets and will also perform separately. Pereira will be joined by pianist, Kylie Loveland for songs by Richard Strauss and “Jungle Fever” by Mattew Hindson. Sargeant will play his own unique blend of composition, songs and stories. He encourages all to attend this event for, “good music, good stories, good times.” 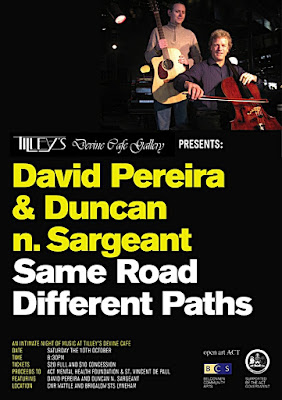 Jonny Ivan - 35 minutes ago
write this year off View
Joanne Mitchell - 3 hours ago
David Warwick and why did they remove the mask mandate two weeks before the first case while Sydney’s numbers were still cl... View
Callum Bowen - 4 hours ago
Completely agree with Simon. For years now we’ve turned a blind eye to thousands of annual flu deaths (and who knows from h... View
News 47

Simon Wheaton - 45 minutes ago
Guy Hosking Google Earth says 1073m. View
chewy14 - 10 hours ago
Astro, I asked for the evidence that Stage 2 of Light Rail was necessary and where the need has been proven from "Government... View
Lifestyle 5

Jizzy Martin - 4 hours ago
Our Lady of the Most Holy Rosary bet you'd complain if a Muslim was preaching Sharia law. This is the same thing circumstance... View
Business 8

Michael A Avis - 5 hours ago
I lost my job and can’t get any financial help for any Governments, due to my wife having a job in childcare. View
Joel Symmans - 9 hours ago
Peter Hislop the feds got enough AZ vaccine for the nation. It's the anti vax smear campaign that people bought into and then... View
News 54

Claire Cat - 5 hours ago
Jo Hann I agree wholeheartedly X and it's for those reasons our family has chosen to opt out of distance learning and focus o... View
Jo Hann - 6 hours ago
Claire Cat at 6 years old, learning should be entirely play based. In the best performing countries in the world (with regard... View
Food & Wine 10

Pat Kelly - 10 hours ago
Thanks for your great times we all had,30 years of it,you guys go and enjoy life,many thanks.your most welcome to call in to... View
show more show less
*Results are based on activity within last 7 days