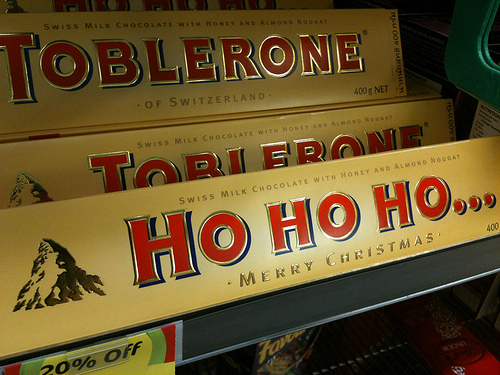 While conducting my weekly shop at a local supermarket I stumbled upon this very inappropriate piece of Christmas advertising on a traditional chocolate treat. As we are all aware, and for good reason, Santas around the country (and hopefully the world) are no longer to say “Ho ho ho” due to its offensive nature. The last thing I need to deal with is my four-year-old child running around the house spouting such offensive language.

Rest assured that I will be contacting the producer of this product, Kraft, to inform them of the extremely inappropriate labelling of their product. Please join me in boycotting this treat at Christmas time to help reinforce the message to this company.

Given this is RiotACT…. Not sure if serious? You have to be trolling.

You can’t be serious.

Wind up, no-one can seriously be that stupid.

Even worse, it says Merry Christmas on it!

Obvious troll is obvious. If not then seriously disturbed.

This explains why the Santa they interviewed on the news last night said ‘He He He’ at the end instead of ‘Ho Ho Ho’. I thought it was strange.

I too would to take this opportunity to point out how inappropriate it is to be selling easter eggs at Easter. Eating the young of innocent chickens is wrong and all this does it reinforce this message amongst the youth of today.

Talking of possibly inappropriate Xmas things…and not saying that festively labelled Toblerone is, but I took my son to see Father Christmas a week or so ago and whilst I was waiting for the photos to be printed out, a couple of 17 year old girls decided to come and get their photo taken on Santa’s lap. As you can imagine, they were doing it because they are 17 and don’t think any farther than dressing inappropriately and having some fun, however it occurred to me that it may have been a slightly uncomfortable moment for Santa, and wondered if really they should have an age limit of people who can sit on his lap – maybe they could sit by him, but not on him?

The other half of me says that it all looked innocent enough and probably happened all the time.

He said it again!

My wife was telling me yesterday about one of her friends saying the Santas at Westfield Belconnen were not allowed to say “ho ho ho” and this was written into their employment contract. I called bulls***, but I’m not so sure now. There are people so stupid as to take offence at this.

One of the more pathetic articles I’ve read on RiotACT. Whether this post is for real or not, there are increasing numbers of ‘do-gooders’ like this who really only serve to make our world an unhappy place. Seriously. Get over yourself, Darqan, you Christmas grinch!

Whether the OP is making fun of the PC extremes everyone goes to or is actually serious I don’t know. But there’s stuff going around about how Santa can’t say Ho Ho Ho anymore. Either because the ‘Ho’ part is offensive, or because it scares children. There was something about it in online Canberra Times on the 17th. Apparently they are told not to say it when they are trained for the job.

Incidentally people will probably appreciate some of the kids names in the articles too. Cruz, Scarlett, Juniper and Kayleen to start.

Exactly. If Santa can enjoy a foursome, albeit paid for out of the elves’ superannuation fund, then good on him. I imagine language difficulties have somehow prevented him from stating the obvious line: “three hoes to go”, so he has reverted to the more simplistic ho, ho, ho.

absolutely no no no bloody way.

Goodonem i reckon! People are so PC these days. and I don’t sing Baa baa rainbow sheep ever.

Mikey Moore - 28 minutes ago
100 meters away the Carrington and Kingston Tower both rise to 15 stories..almost twice the height of this proposal. 8 storie... View
Mikey Moore - 30 minutes ago
Julie Macklin I don't think this development is open for public consultation yet. When a DA is submitted a shadow diagram sho... View
Julie Macklin - 33 minutes ago
Mikey Moore On Google maps it appears that some of Green Square is south of the development. However, looking again, it is mo... View
Business 4

Anne Christoff Frampton - 3 hours ago
Jarrod Male it was very challenging but worth it. View
Tiffany Roy - 3 hours ago
Kurt Neist lol probably not any that are public. But we need to be doing better.... View
Kurt Neist - 3 hours ago
Is there a nice one somewhere? View
Food & Wine 4

Andrew Ransom - 10 hours ago
Elisa - our finish date 🥰 View
Boyo Birch - 11 hours ago
The best place too View
Cristy Chamberlain - 12 hours ago
Peter Chamberlain can we go back? View
News 8

Sean Bishop - 13 hours ago
Daniel nailed it View
Stefan Stirzaker - 15 hours ago
Good to see the white-anting after the fact in a bid to reduce the amazingly good job done by the upper leadership and member... View
HiddenDragon - 16 hours ago
The politics and the personalities are ultimately secondary issues - with increasingly nasty summers on the way, we need to d... View
Property 7

Ian Fraser - 18 hours ago
Sure Elizabeth, but be wary of coastal ones which won't like clay soil or frosts. And be aware that the local Silver Banksia... View
Property 28

Property behemoth Geocon has been accused of putting profit before children's lives by refusing to compromise with the YMCA Early...
Sport 14

@The_RiotACT @The_RiotACT
Missing your laps session? Swimmers will again be able to take the plunge at two government-owned pools this month under the Phase 2 easing of COVID-19 restrictions. Check out the details https://t.co/jGbVuLz4Sd (37 minutes ago)