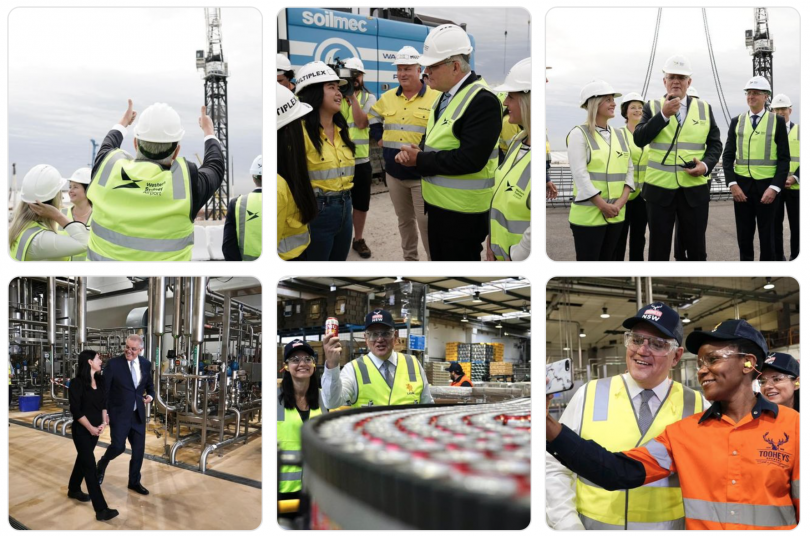 Scott Morrison is already on the campaign trail, ready to roll on over the opposition. Photo: Screengrab from Scott Morrison’s Facebook gallery.

The phony election campaign launched after the Prime Minister returned from the Glasgow climate conference does not bode well for the real campaign in March or May next year.

Fresh from signing up to COP 26 deals and committing to net zero emissions by 2050, Scott Morrison’s government has basically said it’s business as usual, coal is here to stay for a long time yet and Australia will get there because it says so, not due to any tangible policy shifts.

His deputy has even said the Nationals weren’t in Glasgow and didn’t sign up to anything.

Now I don’t really care if the PM doesn’t believe in global warming and climate change, or that he believes protecting the lucrative fossil fuel industries and Australia’s energy reserves is in the national interest, which is a legitimate position.

But the double-speak on this and other issues, the swamping of the news cycle with baseless claims and the warped legislative priorities point to a campaign that will take political expediency into hyperdrive and into the territory of Trumpism.

READ ALSO: Is the Porsche Taycan the electric vehicle for petrolheads, or plain sacrilege?

Meanwhile, Labor’s small-target strategy has Anthony Albanese sounding inoffensively boring but hopefully sensible, offering hints at policy rather than anything too detailed so it doesn’t become the subject of a merciless social media campaign screaming this is the end of the Australian way as we know it.

This is the lesson Labor has taken to heart after the 2019 debacle. It will focus pragmatically on key gripes such as the NBN, perhaps cheaper electric vehicles but keep things firmly in the realm of aspiration.

The Coalition will hope to drown Labor in a shit storm while Albanese will aim to sound like the only sane one in the asylum, without actually standing for anything.

It’s a recipe for an election campaign that sets the bar so low most voters will likely switch off or look for an alternative.

That’s where Morrison’s double-speak comes in as he hopes to keep those tempted by Clive Palmers United Australia Party or One Nation from defecting from the Coalition.

Hence the late and qualified criticism of symbolic gallows at protests in Victoria against that government’s proposed pandemic management legislation, and the repeated statements about how Australians don’t want to be told what to do.

His legislative choices for the last two sitting weeks of Parliament starting this week are also illustrative such as giving priority to the wedge-worthy niche Religious Discrimination and Voter Identity bills over legislation for a federal integrity commission, which one might think ranks a little higher in the public’s thinking after the grants scandals and problems with Christian Porter’s legal bills. 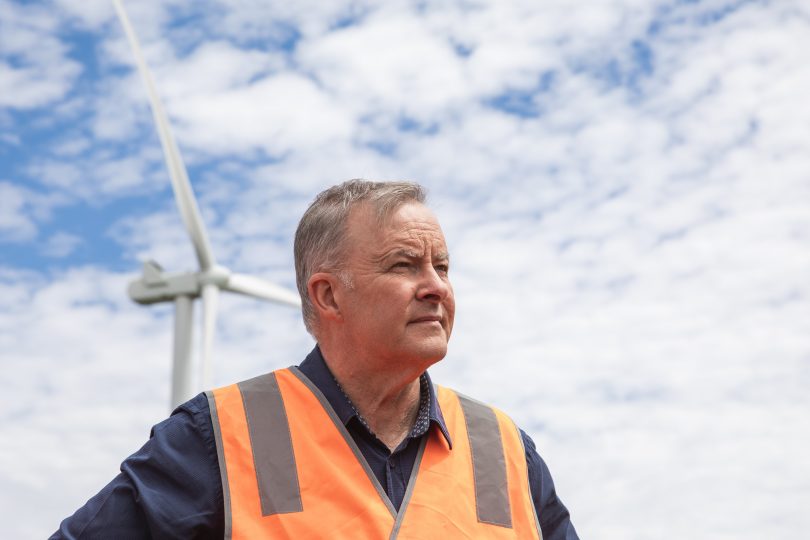 The PM also road-tested some scare points about petrol prices and interest rates, over which both he or his opponent have no control, flagging the age-old question of who do you trust?

But the release with the Friday afternoon trash of Department of Industry-led modelling, along with private consultant McKinsey and Company, that supported the government’s roadmap to net-zero reveals how much Morrison is willing to co-opt the public service and marshal the private sector into producing work that argues its case but is so palpably preposterous.

Even the pro-business Financial Review shredded the document for its ridiculous assumptions, reliance on unproven technology, fantastical projections, and the fact that it doesn’t even get Australia to net-zero by 2050.

But don’t expect Labor’s climate policy due out soon to actually commit it to anything much. Its days of bold action appear over.

This is the sorry state of public discourse within months of a pivotal election with the pandemic still with us, the warnings on climate change becoming ever shriller from the scientists, and the cost of putting a roof over your head dividing the country.

Call me naive, but it’s not the way a democracy is supposed to work. How do we make a valid choice in such a toxic swamp?

Perhaps the hope is in the Independents movement that is striving to spread the spirit of Indi to other seats, and restore some respectability to the political landscape, and save us from the hollow men in hi-viz.

“Even the pro-business Financial Review shredded the document for its ridiculous assumptions, reliance on unproven technology, fantastical projections, and the fact that it doesn’t even get Australia to net-zero by 2050.”

The same unproven technology will, of course, transform us into a “renewables superpower” if only the great unwashed comes to its senses and elects a government which puts a sufficiently high price on carbon and sends sufficient billions of taxpayers’ funds in the direction of the rent-seekers with the best lobbyists and most plausible front organizations on their payrolls.

Yeah, that’s what I get from a lot of this too.

On one hand we need to position ourselves as market and technology leaders to exploit the economic opportunities that are coming in the sustainability sector but on the other hand we shouldn’t factor in any potential emissions reduction benefits from them.

Interestingly the exact same argument was used to promote the roll out of a FTTP NBN by factoring in unknown future economic benefits that the technology will unshackle.

If I see the smirking adman posing in high vis again, I’ll scream. Does he not know he has real work to do in this country? There’s some serious stuff going on here and all he does is grin for the cameras. I can’t bear a 6 month election campaign 😱 go away you hollow man.

Scott Morrison was elected in November 2007. From the opposition benches he had plenty of time to observe Kevin Rudd (who sought to personally control the daily media cycle), and to watch the hilarious first season of The Hollowmen (released between July and October 2008). He benefited from the three word slogans of Tony Abbott, and the destructive negative campaigning that swept the COALition to office in 2013. The Direct Action policy was a predecessor to sports rorts and carpark rorts, ministerially-directed funding to mates/donors/supporters/insiders/fossil fuel industry (Morrison took the Direct Action concept and massively expanded up on it)… Scott Morrison would have made an okay PR/comms manager to a run-of-the-mill Prime Minister, some decades ago. But he is no leader for this century. #VoteThemOut

Albanese and Keneally are all signed up for Morrison’s huge reboot of the Big Australia program – 235,000 net migration. They’d win voters, if they made a point of difference, and ditched Big Australia, but it’s more important to be “woke”.

Yes, it seems like both sides of politics are scared of biased media who don’t even pretend to hold any form of objectivity in writing their “opinion” pieces…..

No wonder we get the dross we do.

More than these politicians, I find some anti- vax people couple their views with righteousness to the point of being very derogatory to others. ‘Be intelligent ‘etc.

In you next episode Ian, could you mention the Greens and what part they will play?