The new head of the ANU School of Music is a refreshingly straightforward person. Associate Professor Kim Cunio has been in the role for just under a year and still spends a substantial chunk of his time just listening to people.

The wounds of almost a decade’s trouble following the 2012 cuts remain open for many associated with the storied School, which has fostered generations of musicians and composers.

“I’m still managing the emotional reactions, the beliefs and the legacy of a very difficult time,” he says. “Running the School itself is just the tip of the iceberg. I spend a huge amount of time in the community. I go to lots of concerts and talk to people until they’re tired of talking. But we can’t live in the past.

“We made great musicians in the glory days, but there are some things we can do better with the culture now. We can care for the students, we can help them develop a portfolio career and grow their connections with the community as a whole.”

“At ANU we get people who are smart and have good values, who can write an essay. We’re looking for a well-rounded liberal arts educated musician who is capable of broader, big thinking,” he says.

Cunio says that, for example, climate change is a pressing concern so the School brought in a visiting engineer this year who had worked on the Adani project.

“I want to let people engage with the contest of ideas, so they go beyond black and white positions to become professionals who can argue nuanced positions,” he says.

Cunio himself has plenty of experience in nuance and change. His lineage is a rich mix of Indian, Burmese, Iraqi and Jewish and, as a child, he learned to chant in Hebrew and Aramaic. His father was a synagogue cantor and professional opera singer and his mother came from a family of musicians. Music was embedded in his early life through culture, not formal lessons.

Cunio’s composition and performance work is similarly multi-skilled and cross-genre. He’s worked with the British Antarctic Survey to record “the sounds of the earth breathing”, using a massive ultra-low frequency archive of audio made every 15 minutes, every day.

“The ice cores provide the exact measurement of CO2 for the International Panel on Climate Change. I was able to record the CO2 leaving the ice, which is actually a beautiful sound,” he says.

“A big part of my practice is to make meaning out of things that are ordinarily static. I’ve survived the university system by finding ways to make work that the university also sees as research.”

Cunio and his wife Heather perform with an early music ensemble, whose musical compass ends with the year 1492.

“It’s the year Columbus sailed for America, the Sephardic Jews were evicted from Spain and Islam from Europe,” Cunio explains.

“For me, that’s where the idea that we had a common identity where music moved between cultures really ended, and look at the price we’ve paid since then.”

School student numbers are at their highest in a decade, and Cunio credits his predecessor Ken Lampl with being an important circuit breaker, enabling him to look towards the future. Collaborations with health and science are well established, and Cunio forecasts some major announcements regarding Indigenous engagement.

“I am shocked at how quickly we are returning to our historical place in Canberra,” he says. “My role is to say, you know, we are OK. We have turned the corner in an amazing way so that everyone here sees bigger picture.

“The School should be the hub for all music in Canberra. We have the facilities and space from Llewelyn Hall to the recital hall, big band room, the best four pianos in the ACT, a harpsichord, historic pianos and studios. That’s our focus now because if we do this well, art can make meaning for the whole world.”

Gosh, has Riot-ACT decided to become a marketing arm of the ANU? Good on Dr Cunio and all who ride with him, but just a couple of probing questions (and answers) in this profile might have made its unabashed optimism a tad more believable. Last time I looked, the Podger Report suggested the School’s problems might have had just a wee bit to do with the way it was being governed. So, what’s changed? Last time I looked, nothing… Just quite how has the School ‘turned the corner’ then? And if Lampl was so good at the job, why did he leave so precipitously? Also, those quoted enrolment figures are as slippery as the ANU’s marketing… Please let us know… are we talking equivalent full-time student numbers, or students enrolled in subjects? The former is what counts, and if there’s more full-time (or equiv) students than over the past 10 years, I’m Ludwig van Beethoven. And, finally, in any event, isn’t the ANU supposed to value quality over quantity?

Andrew Nolan didn’t you restore and donate five historic pianos to the Australian National University. Nice to know there being put to good use.??

Please tell us about the Percussion Program !!!

Is he Furio from the Sopranos?

Maria, no! Cunio from the lush baritones! 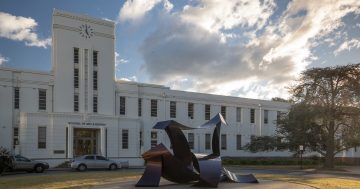