Science is often seen as a mystifying and complex subject. But one ANU science communications student is changing all that with a new event: Co-Lab: Science Meets Street Art. 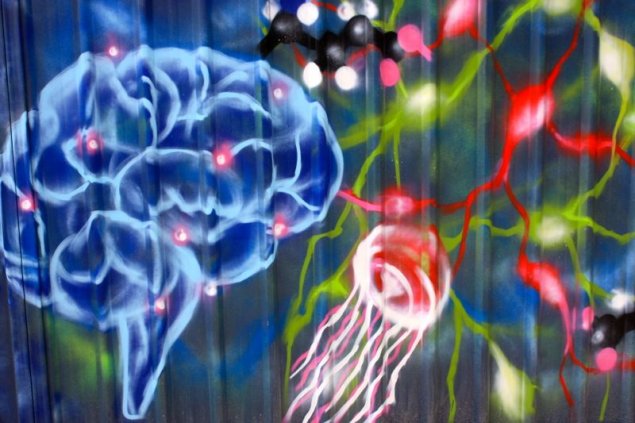 By pairing five PHD science students with five local street artists, Lee Constable took over Westside Acton Park on Saturday (19 September 2015) to create a feast for the eyes – not to mention the brain.

The students were asked to explain their research to the artists, and collaborate on an art piece that could communicate the material in a creative and visually appealing way. The end result is a spectacular mural, which can now been seen at the entrance to Westside Park.

With subject matter as diverse as native animals, lasers, space debris, crystals and the human brain, any science enthusiast is sure to find something to his or her taste.

“Canberra’s emerging youth culture have really responded to street art in a positive way, so it’s a really good way of communicating and connected with the local people,” Lee says. 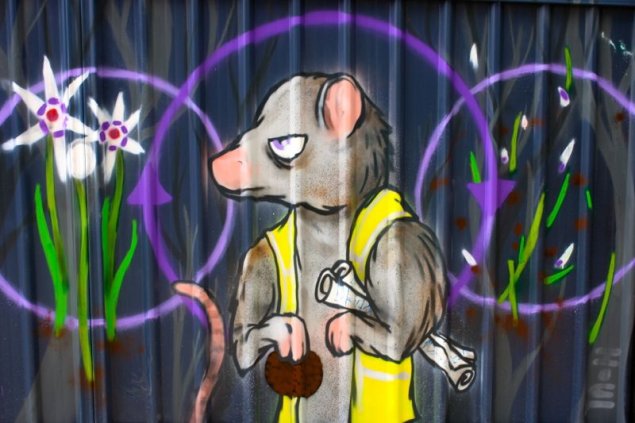 Houl’s interpretation of Catherine Ross’ research on the function of native bettongs in the Mulligan’s Flat Wildlife Sanctuary.

“Members of the public have come through and watched as these pieces evolve and take shape over the day. It’s been great for both the artists and the scientists involved. The artists really enjoyed collaborating with the scientists and feel that it’s brought extra meaning to their work.

“On the other hand, the scientists have talked about how it was a great experience to communicate their research in a simple, relatable way to an artist and to see the public engage with their work through a different medium.” 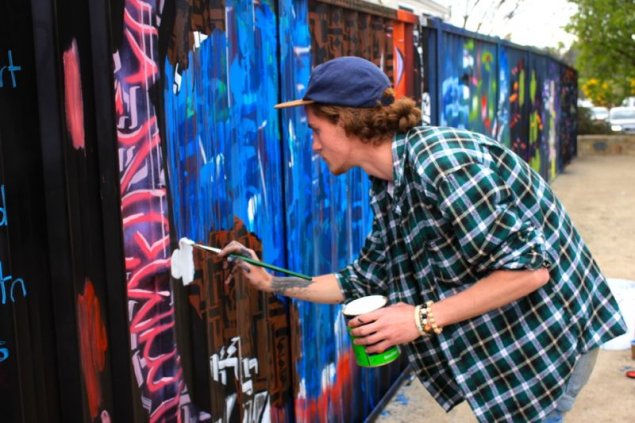 In order to make the project happen, Constable organised for Westside to donate the space for the mural and secured a discount on paint from Sancho’s Dirty Laundry.

She was then able cover the remaining costs with a grant from PARSA (Post Graduate and Research Student Association) under its extra-curricular funding scheme for students.

Lee says she is keen to run similar science-meets-art events in the future, and is looking at ways to raise funds to create a bigger, better experience for the community.

“I’d like to secure a grant so I can pay artists for their time and make it something that Canberrans feel they are a part of. The local PHD students normally work in a lab, so this is a good opportunity to celebrate that work and talk about it in a public space.”

Great idea, and so pleased to see more stuff like this popping up in Canberra over recent months.

Brad Fenech - 13 minutes ago
Plenty of B-rad to go around lads... View
Kirrilie Riddle - 3 hours ago
Dana Riddle when you get home we should go View
Tash Purvis - 4 hours ago
Lauren Fitch yipppeeee View
News 12

William Coats - 3 hours ago
I hope lots of businesses get involved. I hope it is really easy for them to take part. I assume all the small business knowl... View
Opinion 26

William Coats - 3 hours ago
Lee McDowall and he personally probably wont face the people again. It is good of the union not to strike until the week afte... View
William Coats - 3 hours ago
Nathan, The ACT is run as a union town, unless we complain nothing will be done. "fix my street" is the perfect example, why... View
chewy14 - 7 hours ago
The whole point is that developers have worn the costs of their proposals based on the current land use and policies in place... View
News 50

Anthony Briscoe - 3 hours ago
Will the Liberals ever learn. Time to leave the Territory I feel View
Oliver Raymond - 6 hours ago
On a scale of A to Z, guess where Zed comes? View
News 52

Jaala Hamilton - 4 hours ago
Loris Manns couldn’t agree more! View
Lisa Bishop - 5 hours ago
Inmates should be made to contribute to their keep. Get them outside building and planting out vegetable gardens etc View
Breaking 4

JessP - 6 hours ago
Went over Evatt, low and loud! View
Capital Retro - 9 hours ago
It would be nice to see some of air force planes over Tuggeranong some day but thanks for reporting it anyway. View
News 5

JessP - 9 hours ago
Mr Pinkas said the drivers had the support of the Canberra community. Do they? Most people haven't had a pay increase this a... View
show more show less
*Results are based on activity within last 7 days

A few weeks ago, I drove my car across Commonwealth Avenue Bridge for the first time in months. Since the...
Property 155

After more than seven years of lobbying the Federal Government, duplication of the Barton Highway has finally begun. NSW Senator...
*Results are based on activity within last 7 days

Chief Minister Andrew Barr comes back to work today after a post-election break and needs to clean a couple of...
News 40

After months of construction, City Walk has been given an injection of new life with the addition of grass areas...
Opinion 22

Canberra Avenue has taken the dubious title of having the most motor vehicle accidents in the ACT, according to new data...
News 17

YWCA Canberra has lodged a development application for its contentious single-storey, 10-unit supportive housing project in Ainslie that has faced...

@The_RiotACT @The_RiotACT
Heritage fears for the Kingston Arts Precinct project as community feedback fails to make an impact on designs https://t.co/SxLJcBJ6LI (2 hours ago)