Scott McDougall gets life behind bars 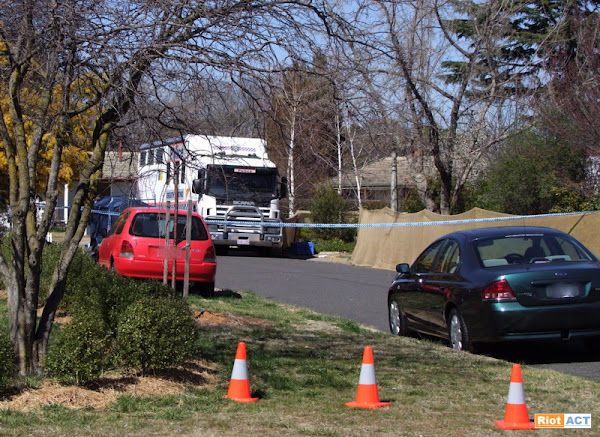 The Canberra Times is reporting that Scott Alexander McDougall has been given two life sentences for the murders of Struan Bolas and Julie Tattersall (aka Julie Franco).

Apparently there’s no parole but he will be able to apply to the Attorney-General for a “licence for release” after 10 years.

UPDATE: The ABC has more:

In handing down his sentence, Justice Gray told the packed courtroom he considered the murders to be in the most serious category, describing them as ferocious and callous.

He said McDougall had “given into a frenzied blood lust and killed his friends in the most brutal way.”

Justice Gray handed down two life sentences for both counts of murder and five years jail for arson.

What a shame, I’ve heard that Monster is depressed, and has excepted he is spending the rest of his life in prison, still getting into lots of fights with other prisoners.

You can now rest in peace Jules, justice has been done.
love you forever xx

The creature who murdered Julie and Struan, will never be released, as he is a psychopath, he won’t have that option, and the ten year thing is a charade. Chris Todd the DPP used this in the sentencing of the creature. Read on, this is only one page of 27.

Baker v The Queen
(2004) 210 ALR 1
Both Baker v The Queen [2004] HCA 45 and Fardon v Attorney-General (Queensland) [2004]
HCA 46 involved unsuccessful attempts to use the Kable decision as a basis for the
invalidation of State legislation. Both attempts failed. Baker was argued in the High Court on
4 February 2004, Fardon on 2 March 2004. The two cases were decided together on 1
October 2004.
At issue in Baker was a 1997 amendment to s 13A of the Sentencing Act 1989 (NSW). In
November 1973, Mrs Virginia Morse was abducted from her home near Collarenebri, in
north-western New South Wales. She was taken, gagged and blindfolded, across the State
border to Queensland, where she was tortured, raped and eventually shot. Convicted of this
atrocity, Allan Baker and Kevin Crump were sentenced in 1974 to life imprisonment. The trial
judge told them: “I believe you should spend the rest of your lives in jail and there you should
die. If ever there was a case where life imprisonment means what it says … this is it.”
Under s 13A of the Sentencing Act, a person who had completed at least eight years of a
sentence of life imprisonment could apply to the Supreme Court for a determination of
sentence (effectively involving the fixing of a minimum sentence, after which parole might be
possible). On 24 April 1997, an application made by Crump was successful: his minimum
non-parole sentence was set to expire in 2003. (However, in 2001, a new s 154A inserted into
the Crimes (Administration of Sentences) Act 1999 (NSW) imposed extraordinarily rigorous
criteria for the parole of “a serious offender the subject of a non-release recommendation”,
including a need for the Parole Board to be satisfied that the offender “is in imminent danger
of dying, or is incapacitated to the extent that he or she no longer has the physical ability to do
harm to any person”.)
A more immediate result of the 1997 determination in Crump’s case was that s 13A of the
Sentencing Act was amended so that “a person who is the subject of a non-release
recommendation” was required to complete 20 years’ imprisonment (rather than eight years)
before making an application. Sub-section (1) defined a “non-release recommendation” as “a
recommendation or observation, or an expression of opinion, by the original sentencing court
that (or to the effect that) the person should never be released from imprisonment”. In
addition, a new sub-s (3A) declared that such a person “is not eligible” for a fresh determination
“unless the Supreme Court … is satisfied that special reasons exist that justify making the
determination”. When Baker applied for a determination under this new regime, the judge
found that there were no “special reasons” and the application was refused.
Baker invoked the Kable principle on two main grounds. First, the fact that the
amendments related only to those “the subject of a non-release recommendation” was said to
be excessively selective. Secondly, it was said that since the requirement of “special reasons”
could have no possible content or meaning, its effect was to involve the Supreme Court in a
“charade”, masking the reality of a legislative judgment that those affected were never to be
released.
The selectivity argument rested partly on the fact that the practice of sentencing judges in
making or not making non-release recommendations had varied widely (so that the absence of
such a recommendation was not necessarily an indication of a less shocking offence); partly
on the fact that the persons subject to such recommendations in New South Wales in 1997
were a limited and identifiable class; and partly on the fact that the persons affected had been
identified by name, in the course of the parliamentary debate on the 1997 amendment, in a
way that appeared to suggest that the amendment was specifically intended for them:

They got away with murder because the laws in the Territory were so flawed that their offences could be defined as manslaughter.

All I can say is Justice Gray has balls. McDougall got what he deserved, while so many others have got away with atrocities, which shoud have been more seriously addressed.

What did the unnamed others get away with?

All I can say is Justice Gray has balls. McDougall got what he deserved, while so many others have got away with atrocities, which shoud have been more seriously addressed.

he has already been in custody for 3 years right?
so he can apply for release in 7 years?……that doesnt seem right to me, but one would assume that he wont be released on his first application anyway…….

Making it the Attorney-General’s decision puts it in the political realm, which significantly reduces the likelihood of early release (or any release at all).

he has already been in custody for 3 years right?
so he can apply for release in 7 years?……that doesnt seem right to me, but one would assume that he wont be released on his first application anyway…….

I don’t know if to like or dislike this…

I like it as this is no softly softly sentence which we see far too often in the ACT.
I dislike it as two people had to die to reach this point…

@The_RiotACT @The_RiotACT
Misplaced for decades, the drawings and meticulous records of Goulburn #architect EC Manfred eventually saw the light thanks to the dedicated efforts of #volunteer historians, plus a little bit of luck https://t.co/Ga0Bn2B66D (20 minutes ago)