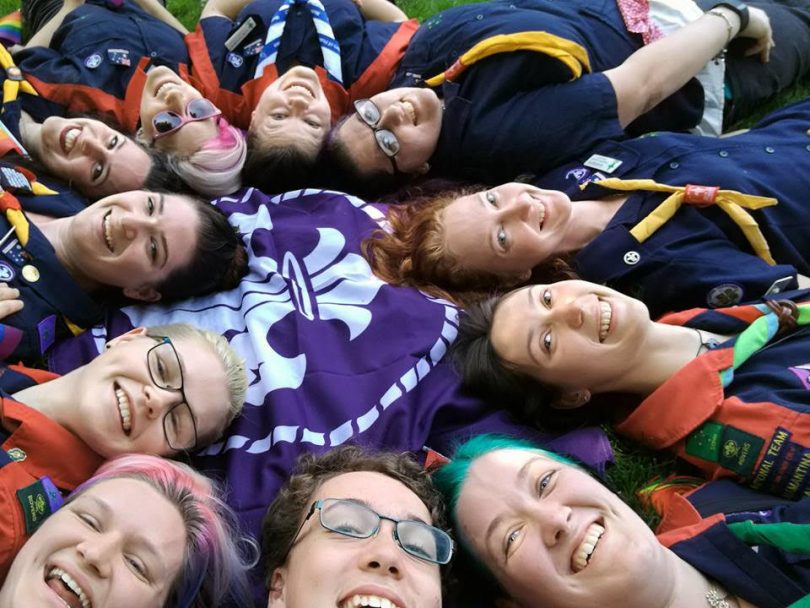 A large number of Scouts ACT leaders have received awards as part of the 2019 World Scout Day Awards. Photo: Supplied by Scouts ACT.

Leaders and supporters of Scouts ACT have been recognised by the Chief Scout of Australia, General Peter Cosgrove (Retd), for their dedicated voluntary service to young people through the Scouting movement.

The date celebrates the very first Scout Camp held in 1907 on Brownsea Island, southern England, by the Founder of the Scouting Movement, Lord Robert Baden-Powell. This simple beginning resulted in the worldwide Scouting movement of 40 million members from 216 countries and territories.

Mr Goode said that every year, leaders and supporters of Scouting devote thousands of hours to the development and well-being of young people.

“Without these adult volunteers, the many opportunities we offer our youth members wouldn’t be possible. The major events, trips and adventurous activities that make scouting unique are reliant on the extra effort from our leaders and adult helpers, and I am extremely pleased we can recognise them in this way,” Mr Goode said.

Just three of the Scouts adults recognised for their dedication include:

Dee Major, Cub Scout Leader at Wanniassa Scout Group, awarded the Silver Emu Award, for distinguished service. Dee’s devotion to Scouts extends beyond two decades and has made a significant impact on the successful development of many Cub leaders in the ACT. Dee is the primary leader for two units and continues to provide wonderful opportunities for the development of Cub Scouts. Dee has also been integral to the introduction of the new badge and programming system across all sections in scouting.

Kathryn Kasmarik, Cub Scout Leader at 13th Canberra Scout Group, was awarded the Meritorious Service Award. Kathryn’s enthusiasm, ideas and willingness to give everything a go in the youth program extends to Cub Scouts across all areas in support of the leadership team.

Claire Konno, a Scout Leader for more than four years with the Air Scouts Canberra Group was awarded the Special Service Award. Claire has received high praise for her leadership of the Scout unit, where her energy, drive and leadership has supported the development of Air Scouts Canberra.

Full list of the ACT recipients of the 2019 World Scout Day Awards:

Congratulations Leon! This thread is all about you now 🙂

Dom Polegubic - 16 minutes ago
This is a good link to an intro to Croatian wines: https://winefolly.com/deep-dive/introduction-to-croatian-wines/... View
Opinion 11

Deepak Ramanath - 37 minutes ago
James Forge Wow, where is this? View
James Forge - 38 minutes ago
Deepak Ramanath the government is about to demolish an overpass and replace it with yet another set of traffic lights View
Kylie Wylie - 1 hour ago
Residents of Lyons suffer badly every work day. Every main road is gridlocked with rat runners that mostly won't even let oth... View
Opinion 189

Alex Dee - 41 minutes ago
You need to get out more. View
Francesco Merlino - 48 minutes ago
Alex Dee Alex Dee I hope you are right! View
circe64 - 2 hours ago
There is a road going into Gungahlin where 90% of drivers clearly show they don't read road signs. They drive 60 in a clearly... View
Lifestyle 2

inverted63 - 47 minutes ago
Oh dear. ...Makes accusations about made up statistics & then cites a total of 3 successful female artists across a whole ind... View
Breaking 1

Shay Daisy - 58 minutes ago
So sad. Please everyone be careful out there. Be patient, observant and kind so we can all be safe. View
Breaking 11

@The_RiotACT @The_RiotACT
Canberra's surging house prices mean couples are taking longer to save for a deposit, and are being forced to lower their aspirations, according to a new report https://t.co/DmpeMwLcDP (58 minutes ago)