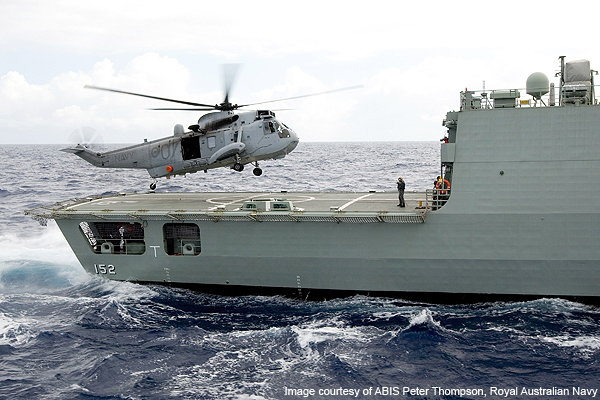 Here are the details:

Where: A formation of Sea Kings will launch from the Naval Air Station at HMAS Albatross, Nowra, proceed up the NSW coast to Sydney, fly over Sydney Harbour then turn south to Canberra, fly over Lake Burley Griffin and the Australian War Memorial before heading east to the coast, then over the Shoalhaven and back to the Naval Air Station.

Why: To mark the end of an era. The Sea King helicopters will be retired after 35 years’ service and 817 Squadron decommissioned after 48 years’ continuous service at a traditional ceremony in Nowra on Friday 16 December 2011.

The Royal Australian Navy’s Sea King helicopters are being retired after 35 years of remarkable service to Australia in times of conflict, peacekeeping, natural disaster, search and rescue and national celebration.

As well as retiring its current aircraft, 817 Squadron will also decommission after 48 years of continual service, during which time it has operated the Wessex and Sea King helicopters.

any ideas as to where they will fly over – would be a nice pic if I can get the right vantage point!

Donna Ainge - 28 minutes ago
Hi Julie-Anne. Where in O’Connor did you live? Hakea Cres by any chance? View
Dot Willcoxson - 3 hours ago
Suzanne Huntley Doug has posted a comment further down. The neighbour he refers to was Frank Machutta who lived across the ro... View
Doug Willcoxson - 4 hours ago
A neighbour of ours in Pearce was on his way home that night and was behind the cars that were washed away. He was passed the... View
News 13

Zakzook Chico - 42 minutes ago
Patrick J Pentony couldn’t agree more View
William Coats - 59 minutes ago
So after 20 years this Labor Greens Government is ready to promise action. I guess we will have to wait and see. View
Patrick J Pentony - 1 hour ago
Rheyce Spears we are at the start of the twentieth year of labor greens gov in the ACT. Not sure you can really blame anyone... View
Opinion 3

William Coats - 1 hour ago
what impact will further development in the Sullivans Creek catchment have on future flooding in Oconner and Lyneham. These a... View
News 8

Juanita Dawson - 4 hours ago
What an amazing man View
Russell Nankervis - 6 hours ago
I wish I could donate but alas. I am too gay View
Kriso Hadskini - 9 hours ago
If they would just let go of the 1990's living in the U.K rule my husband and I would regularly donate. View
Community 40

dashing1 - 6 hours ago
Thip's Thai in Belconnen, for me. Humble setting, delicious food always served with a smile. View
Opinion 40

Dot Thompson - 10 hours ago
Hannah Tracey, is this for or you and Tom? View
show more show less
*Results are based on activity within last 7 days

@The_RiotACT @The_RiotACT
Our latest #GigGuide is out, featuring everything from post-hardcore to punk to jazz, plus several shows on Aspen Island, home of the Carillon https://t.co/UUcPwnkjyq (32 minutes ago)

@The_RiotACT @The_RiotACT
Multicultural Eats: Where to find the best Thai food in Canberra https://t.co/Btz4GZRJeu (2 hours ago)

@The_RiotACT @The_RiotACT
The ACT is expanding vaccine storage facilities at the Canberra Hospital in preparation for the arrival of the Pfizer COVID-19 vaccine https://t.co/sJOTHW08De (4 hours ago)