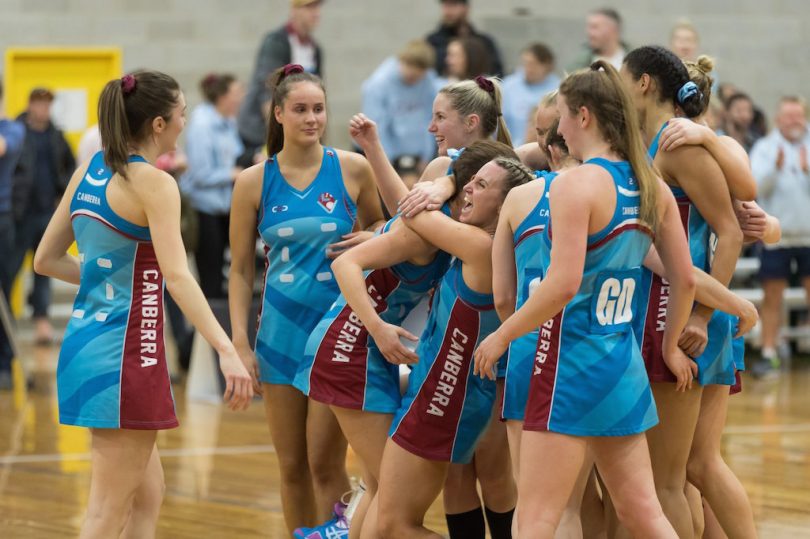 The ACT managed to win only 13 of the 684 sports grants awarded by the Federal Government program criticised by the Auditor-General, and which has the Labor Opposition calling for the head of Nationals Deputy Leader and former Sports Minister Bridget McKenzie.

The Auditor-General’s report on the Community Sport Infrastructure program found that it was biased towards marginal electorates held by the Coalition and those it had targeted as winnable, with the Minister’s office running a parallel assessment process that over-ruled original decisions by Sport Australia.

It found the awarding of grants was not informed by an appropriate assessment process and sound advice, and that successful applications were not necessarily those with the most merit.

The entire program was worth $100 million, with only $1.5 million going to the ACT.

While the ACT, with its solid Labor vote, is hardly considered marginal, several of the grants were announced by Liberal Senator Zed Seselja during the election campaign in which he was the target of strong, if overly optimistic, challenges from the Greens and an independent.

But Woden Valley Gymnastics was not far behind, winning two separate grants of $200,000 each in Round 1 and Round 3 to extend its gymnasium at the former Holder High School site which it leases from the ACT Government. The sport, in general, was the big winner with South Canberra Gymnastics Club in Wanniassa being awarded $140,000.

As in other electorates, new women’s sport was a major beneficiary with the Brumbies winning $199,000 to install women’s changing and bathroom facilities at their training ground at the University of Canberra.

The University of Canberra Union received $215,000 so five ‘3 on 3’ basketball courts could be installed at the Bruce campus.

The Molonglo Juggernauts Australian Rules Football Club, of which Senator Seselja was the 2014 club patron, won $50,000 to upgrade its Stirling Oval home, including an electronic scoreboard, undercover seating, and bathroom facilities with access for people with a disability.

Pegasus Riding for the Disabled at Holt received $48,000 to upgrade the safety and accessibility of its facilities.

Seems more than fair to me.

The reason there are guidelines for the allocation of grants is to ensure that the money is allocated fairly and not on ministerial whim. It’s not a matter of master and slave, the minister does not have the absolute right to act without accountability. Nothing whatsoever rational about your observation here.

While it is true that the Department makes recommendations that the Minister may or may not accept, if she doesn’t accept them, she is supposed to record the justification of her decision. I assume she couldn’t show any justification for the way the grants were distributed (because who would record that they were pork barrelling) and this has got her into hot water.

The Sports Minister is unable to appropriately explain the distribution of federal sporting grants to marginal electorates held by the governing party. The Auditor-General complained about the manner in which the grants have been administered. Nevertheless the Prime Minister has unequivocally supported the minister responsible for administering the grants.
Seems like standard ministerial practice these days …
… except the above narrative describes events in 1993/94 when then Sports Minister, Ros Kelly, with the ongoing support of then Prime Minister, Paul Keating, refused to resign for perceived bias in the handling of sports grants. The Australian Democrats (who held the balance of power in the Senate) effectively forced Ms Kelly to give evidence to a House of Representatives committee. The 12-person Labor dominated committee ultimately found that her actions were “not illegal” but her administration was “deficient”. This was enough for the Liberals, led by Hewson and Costello, to initiate a campaign to demand Kelly’s resignation from the ministry. She eventually did so and several months later resigned from politics.
The similarities between Kelly’s situation and the imbroglio surrounding Senator McKenzie are manifest. However, it would be surprising for Phil Gaetjens, Scott Morrison’s former Chief of Staff and now Secretary of the Prime Minister’s department, who is examining whether McKenzie has breached the ministerial code, to return an adverse verdict.
So then, it remains to be seen how the independents in the Senate will react. Will Pauline Hanson and Jaqui Lambie enter into a secret deal with the government to protect McKenzie in the Senate or will they decide enough is enough and endeavour to enforce rhe concept of ministerial accountability?
One thing is for sure – this won’t die for lack of oxygen, with Parliament due to resume in a fortnight.

Yes, unlike the “unprecedented” bushfires.

I’m surrprised you haven’t joined the parade of Libs and supporters to have denied that there is an issue – you seem to be in denial about everything else.

@CapitalRetro … is that the best you have to offer?

Alicia Conley - 6 seconds ago
If they try put a maccas or KFC there I'll be protesting View
Jackie Fuller - 40 minutes ago
Been living in Chisholm for 11 years..... as a young family we would never step foot in the tavern, never felt safe to do so!... View
Nunkeri Bungledool - 1 hour ago
Hope no yucky Maccas is built. Thanks to Jen and Gumby... View
Opinion 25

phydeaux - 1 hour ago
" “I don’t know how serious your relationship is, but …”. This jab is definitely targeted..." Continuing harassment i... View
Ezekiel Chalmers - 2 hours ago
You know, maybe the Protestants have that one right; if the scripture isn't accurate enough that you should follow it, maybe... View
Nick Beaton - 2 hours ago
Ezekiel Chalmers please, enlighten me with examples - and may I just add that, as Catholic, Sola Scriptura (only scripture) i... View
News 57

Sophie Stoddard - 1 hour ago
Zali Starkis let’s go! View
Susanne Levy - 12 hours ago
Building this to be used by tumbleweeds . Maybe stop getting us into debt for things we may never use again considering our s... View
News 1

Feedback - 2 hours ago
The ACT should allow children to go back to school based on ACT Vaccination thresholds and not wait for National Vaccination... View
Community 16

Carmen Cassar - 3 hours ago
When are hairdressers and nail technicians opening . It’s more likely to catch Covid from a supermarket. Mental health is g... View
Anthony Beck - 14 hours ago
Why can some training companies continue face to face training, and in a classroom environment, but transport training cannot... View
Community 3

buzz819 - 6 hours ago
I still don't get why? The exposure sites are all over Canberra. Just because you want to know something, doesn't mean it is... View
kenbehrens - 12 hours ago
CBR Check-In App now sends push notifications for potential exposures. Yet, public transport services are still being listed... View
Business 2

Peter Hislop - 12 hours ago
Unfortunately state and territory governments can only heed medical advice about risk/benefit of each change up or down. Feds... View
News 14

Capital Retro - 14 hours ago
Your comment is well founded because in the USA limitations of land use for these abominations is now being exceeded (see vid... View
show more show less
*Results are based on activity within last 7 days

If you've got a spare five hectares, a shed and some cattle yards, you could throw a lifeline to some...
News 14

The promise of better light rail access to the Mitchell business hub is now a reality with services commencing on...
Opinion 33

NSW Premier Gladys Berejiklian will be missing from our screens at 11:00 am today, and some may think that's a...
News 24

@The_RiotACT @The_RiotACT
Deputy Chief Health Officer Dr Vanessa Johnston said vaccine take up from teachers has not been a concern, but schools and health officials were focused on how health measures in schools can be improved https://t.co/jdfxjeSEFs (16 minutes ago)

@The_RiotACT @The_RiotACT
WorkSafe inspectors were forced to shut down four construction sites yesterday for non-compliance with COVID-19 requirements. One close contact site has been identified in Fyshwick https://t.co/umSyfIsQwq (25 minutes ago)

@The_RiotACT @The_RiotACT
Did anybody seriously believe that the ACT lockdown would not be extended this week, asks Ian Bushnell https://t.co/hJkBRdXmGv (3 hours ago)