The ACT Government has launched an investigation into a riot at the Bimberi Youth Justice Centre on Monday night (26 August) which saw seven staff taken to hospital with injuries and police called to secure the centre.

Around 6:51 pm, Bimberi Youth Justice Centre staff called ACT Policing to help them address an incident that involved several young people aged between 14 and 20-years-old and staff. Police arrived a short time later and the centre was secured by 7:40 pm.

Four staff were taken to the Canberra Hospital and three to Calvary Hospital, all in stable conditions and were all released by midnight.

Ms Stephen-Smith said she has commissioned an investigation to be conducted by former Chief Executive of Juvenile Justice in NSW, Peter Muir, who arrived in Canberra on Tuesday afternoon (27 August).

“This is a significant incident and we are taking it very seriously,” Ms Stephen-Smith said. “It is very important that we do consider this as matter from a youth justice perspective in addition to the perspectives of ACT Policing and WorkSafe ACT so that we can learn any lessons that can be learnt from this incidence.”

Mr Muir will also investigate how a 17-year-old Bimberi Youth Detention Centre detainee escaped from Canberra Hospital and went on the run for three hours before he was found in Acton less than 24 hours earlier.

Ms Stephen-Smith was adamant the two incidents are separate but said it was important to investigate both matters. 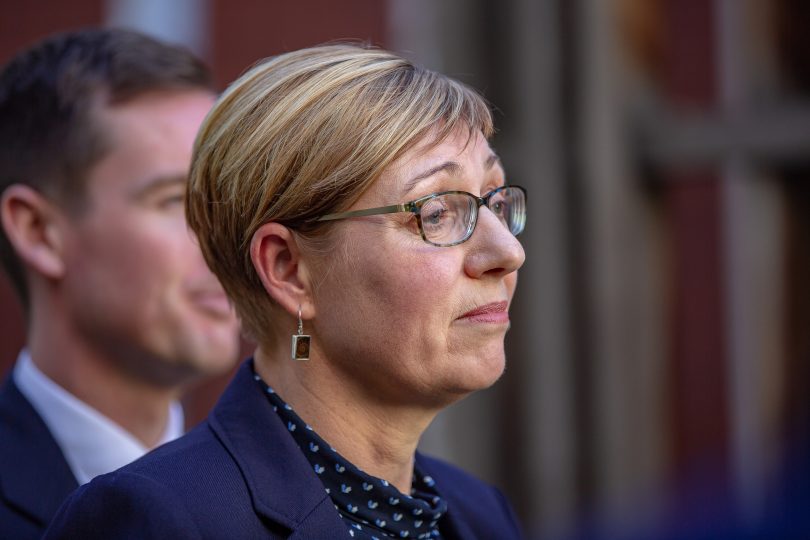 Ms Stephen-Smith has commissioned an independent investigation into the incident. File Photo.

“We were already intending to look into that incident of the young person absconding and Mr Muir will now undertake an investigation into both of these matters,” she said. “This is not to indicate that these matters are linked.”

Ms Stephen-Smith said the centre will be in rolling lockdowns for the day and will only allow young people to leave their units in smaller numbers to help calm the centre.

“These kinds of incidents have an impact on all staff, who work with some of the most difficult and complex young people in our community,” she said. “An incident like this has a direct and indirect impact on all staff and it is important that we support those staff in any way they need.

“This is a very difficult time and our first priority is the safety and security of staff and young people at Bimberi and making sure they get the support they need.”

“Any workplace injury is a concern to WorkSafe ACT and it will conduct its own investigation into the incident,” Mr Jones said.

“Send them to the AMC. I’m sure they’ll be happy there.”

In what way would they be happy?

Marina Bridle - 7 minutes ago
Really devastating devastation. View
Malcolmo Oz - 10 hours ago
Helen Roach They are an introduced species ... and as NZ has discovered, introduced species decimate the natural balance of t... View
Deborah Kaye - 11 hours ago
Helen the horses are feral pests that are decimating this country and it’s wildlife - they are also posing dangers to human... View
Opinion 14

Rob Thomas - 5 hours ago
Debunk the picture? What, prove it doesn't exist? Or to you mean prove that government isn't swayed by a dozen people waving... View
Rob Thomas - 5 hours ago
No, Jim, really really stupid. But I see you mixed that up. View
Jim Hosie - 6 hours ago
Debunk this picture and there’s plenty more around. Must be them anticlimactic change people that do these there protesting... View
Opinion 4

Paula Simcocks - 6 hours ago
Looking back in times of war and crisis people loved the fun of live shows, music and drama. Lifts spirits, usually doesn’t... View
Lindy Edwards - 13 hours ago
Nanna was reciting Yeats as fires approached her place. And a he'll of a lot of people are going to be singing, drawing and w... View
Opinion 14

Malcolmo Oz - 7 hours ago
Felicity Jane Good comment - very insightful and forward thinking View
Shane Murphy - 8 hours ago
Anura Samara my point is that people are happy to protest in Australia because there are few consequences in doing so. Not so... View
Anura Samara - 9 hours ago
Shane Murphy silly comment. As Australians we can influence the debate in Australia. And an Australia with strong and effecti... View
News 31

Julie Maynard - 8 hours ago
Tania Shaw I’m going buy what I owe compared to my friends. Yes, I did add up the cost you mentioned and I’m still ahead-... View
Stuart Herring - 12 hours ago
A mortgage is almost guaranteed to be cheaper than renting the equivalent property - after the first couple of years. Because... View
Gill McGill - 12 hours ago
Corey Karl yep! And pay for other people. 🤷‍♀️ View
Business 1

Julie Maynard - 8 hours ago
That’s awesome. I love our city and thanks for sharing how great it is with others. They will never believe you though. View
Community 30

Alanna Davis - 10 hours ago
Kristy Morton The article is asking people to rent out their holiday homes, for fair market rent, not for free. View
News 27

Fiona Dickson - 14 hours ago
Damian Lomax I’m sure you’re aware there are down sides to those fuels as well. They are not renewable resources - come b... View
News 93

May Mac - 18 hours ago
The link didn't work for me. I found a page on the ABS website and tried to post it but it doesn't open from here either. View
show more show less
*Results are based on activity within last 7 days

"We have never before been under threat east to west, north to south. The whole region has been smashed," Federal...
News 31

@The_RiotACT @The_RiotACT
Good news for Canberra cricket fans with the ACT Meteors heading into a streak of four home matches https://t.co/E2C3ZnO8Us (7 hours ago)

@The_RiotACT @The_RiotACT
Frustration with how outsiders denigrate our city prompted Marg Wade to write a book about Canberra secrets, then to launch a tourism business. She's netted three major awards & commendations in six months while doing something she loves with a passion https://t.co/k5cB7gzXaO (10 hours ago)