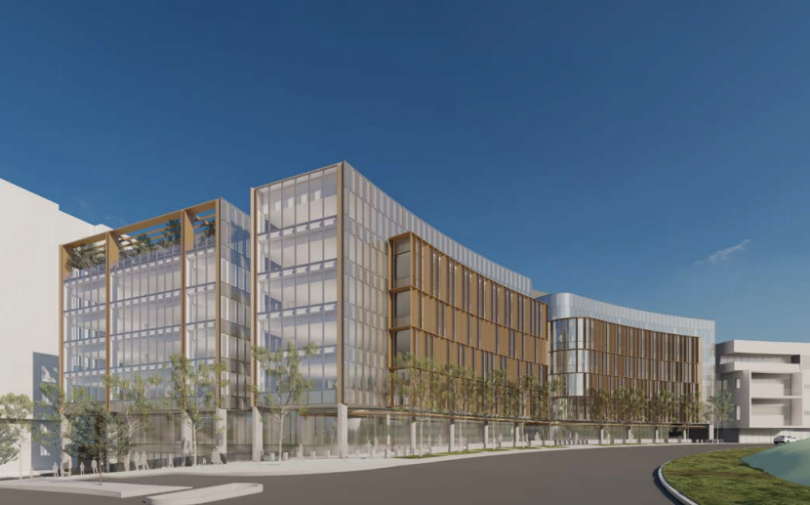 Morris Property Group has unveiled its revised development plans for One City Hill – a seven-storey office complex with ground floor retail and hospitality.

MPG had proposed a mixed-use residential project for the more than 10,000 square-metre site on Blocks 10 and 11, Section 100 in the city next to the law courts, but abandoned those plans because of the pandemic saying it eroded the demand for accommodation from international students.

It has now lodged a Works Application with the National Capital Authority, saying the new proposal will provide a highly flexible, sustainable and innovative workplace environment that will contribute positively to the urban life of Canberra City.

It comprises two distinct but connected buildings with a curved, 25 metre-high frontage to Vernon Circle, double-height colonnade and textured louvre screen which the planning document says will align with the adjacent court building and reinforce the civic nature of City Hill. 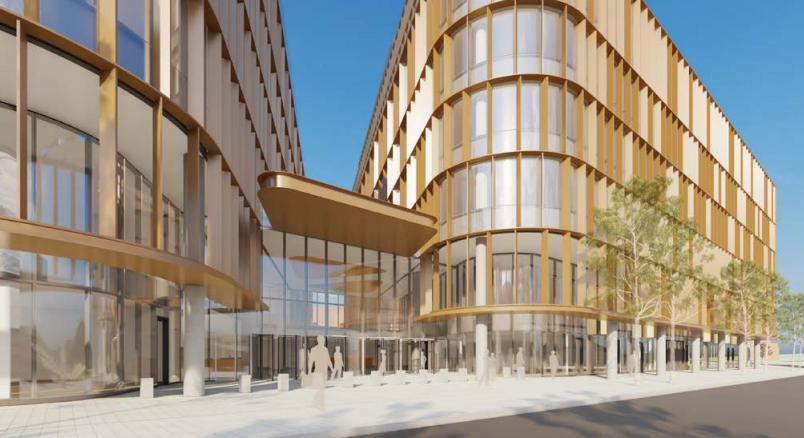 Knowles Place will be extended through the site to Edinburgh Avenue and surrendered to the ACT Government as a public road upon completion.

The extension has been designed with a pedestrian and bicycle-friendly shared zone to slow traffic and encourage movement through the precinct, and will support 783 square metres of retail and food and beverage outlets

It will have 121 metres of active frontage including shop fronts and entry lobbies that will wrap around the corner of Edinburgh Avenue.

A number of pedestrian laneways have also been included in the plans.

The complex will add more than 34,000 square metres of office space to the city, accommodating 2500 people and 3000 workspaces. 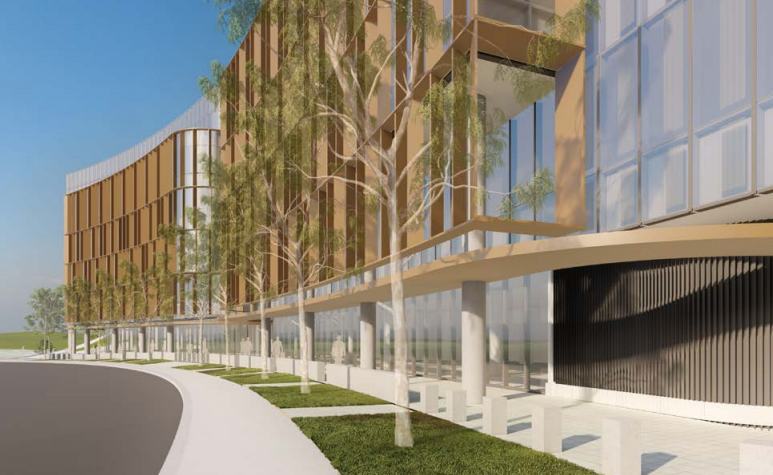 It has been designed to meet a high standard of sustainability and energy efficiency, targeting a 5 Star NABERS rating and a 5 Star Green Star rating.

MPG plans to install a significant public art piece at the main entrance to One City Hill on Knowles Place in consultation with the NCA.

Public art is expected to be a feature of future stages of the precinct.

The project’s approved basement car parking levels are nearing completion and expected to be open to the public later this year.

The three levels will hold 871 parking spaces for office workers, tenancies and the public. There will also be end-of-trip facilities for cyclists.

Most of the building services and the vehicle access have been located at the northern end of Knowles Place.

MPG believes the project will reinforce One City Hill as the commercial centre of Canberra. 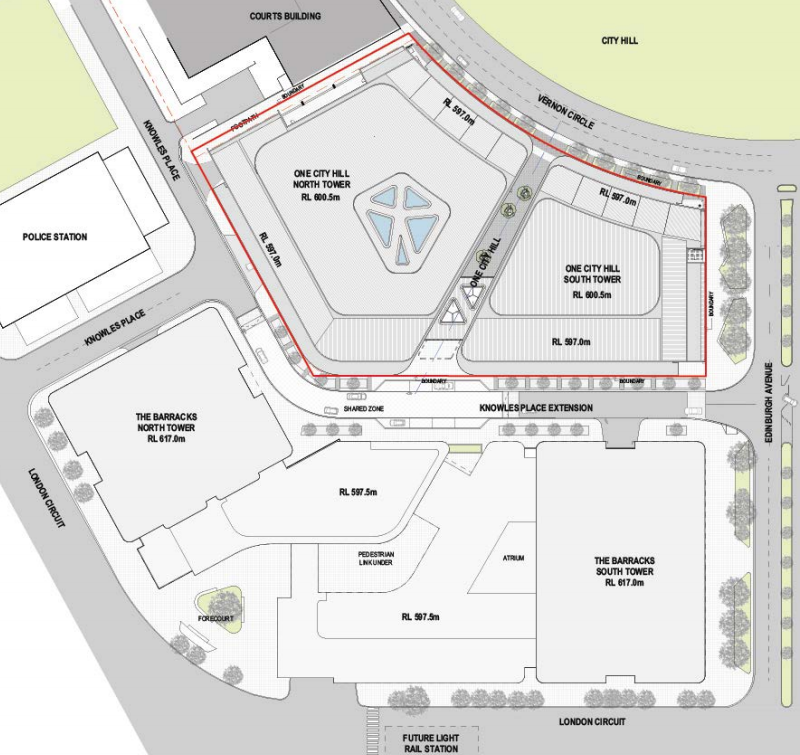 The precinct masterplan with One City Hill outlined in red. Image: GMB Architects.

This development is part of a wider planned precinct that will include two landmark tower buildings to the London Circuit site corners on Blocks 8 and 9 and a low-rise central element fronting London Circuit.

Known as The Barracks, this second development will cover more than 11,000 square metres.

The original project began with construction of the Edinburgh Avenue extension on Block 7, which was completed in December 2020 and handed over to the Territory.

This is great news!! All the best Morris Group. I live near this location. It will be a great addition to that area if the cbd that has been an ugly car park for decades. Well done for getting it up during these difficult times.

its getting very squishy in that precinct, given the work from home culture now it may drive down property rents and leave empty buildings.

…surely, ‘office space’ in this day and age is redundant !!! Have the government learnt nothing…? Oh, apologies for the oxymoron…

The new development is called The Barracks. That brought a smile to many of us who visited the Oxford Street precinct in Sydney in the late 1970s and early 1980s.

The Barracks was a famous gay men’s club on three floors, and the main attraction was the glass urinal behind the bar where you got a good view with your meal and drinks.

Unfortunately it looks like this version of The Barracks will have nothing in common with that earlier much missed institution.

While civic was the historical heart and CDB. I’d imagine that a newer more modern centre will emerge in years to come as this concrete slab fades into grey

Enough of this crap.
Bring back NCDC

Peter West interestingly any development in that area needs NCA approval. NCA being the successor of the NCDC.

Peter West my point they are involved already! So nothing to bring back.

Ashley Wright NCA has never and will never be NCDC. Period

Peter West thankfully. Many of the issue this city faces is as a result of their decisions. In fairness though their decisions were right for the time. But times change.

Ashley Wright I guess you are right. Infill is the way to go these days. Forget the Burley Griffin plan.
No more open spaces.
Let the developers have it all their way.
Canberra will be just like every other ‘successful city’, Newcastle, Sydney, Wollongong etc.
Times do change, especially when people from these ‘successful cities’ move to Canberra because they like it and then want to change it to what they came from.

In actual fact most of what is being built and has been planned in the city is closer to the Burley Griffin plan than the NCDC plans of the 60’s and 70’s! Including development on Vernon Circle and the changes and development near the lake. Things such as extending Constitution and Edinburgh Aves to Vernon Circle, the raising of London cct and the changes to the west basin being good examples.

The Burley Griffin plan also didn’t have Parkes Way separating the city from the lake. That of course was the NCDC’s doing. If you look at the Burley Griffin plan the road that goes around the lake that we know as Parkes way was mean to cut through Acton to join David Street in O’conner and head towards Northborne Ave where it intersects with McAuthur Ave.

Plans of course do change. So a bit rich to pick and choose and complain about the Burley Griffin plan.

Peter West The NCDC has fled to China!

A development that makes a lot of sense.

Real glass and concrete jungles stuff. Why isn’t there a wider space for between the road and building for plantings to try an help reduce the heat that will be generated by all that those hard surfaces. I know there are trees in this illustration but they are there for marking purposes. In real life tree wont survive the heat the will be generated by the building and the road. Their roots will cook.

City hill area has been spoiled by these buildings. In this area, it should be free from commercial development and be left as an open space. Shame on the Barr government for so much infill occuring in Canberra over recent years.

Anton Duvata huh? This land was a carpark, so not really great open space and when was the last time anyone visited city hill? Area in extreme need of a spruce up.

Anton Duvata you’d prefer endless pavement, concrete and car parks? I recommend you look up the City to the lake project. Canberra needs development in these areas if it ever wants to transcend its reputation as an embarrassing culture-wasteland and failed planned city.

“The three levels will hold 871 parking spaces for office workers, tenancies and the public. There will also be end-of-trip facilities for cyclists.” Good to see.

Adele Craven carparks are not really open space. That’s what is being built on.

Besides it’s not like building on Veron Circle is something new. The assembly building, theatre, the Supreme Court and police station have been there for many many years.

Ashley Wright You’re overstating it there. The assembly building and police station are on London Cct and are nowhere near Vernon Circle.