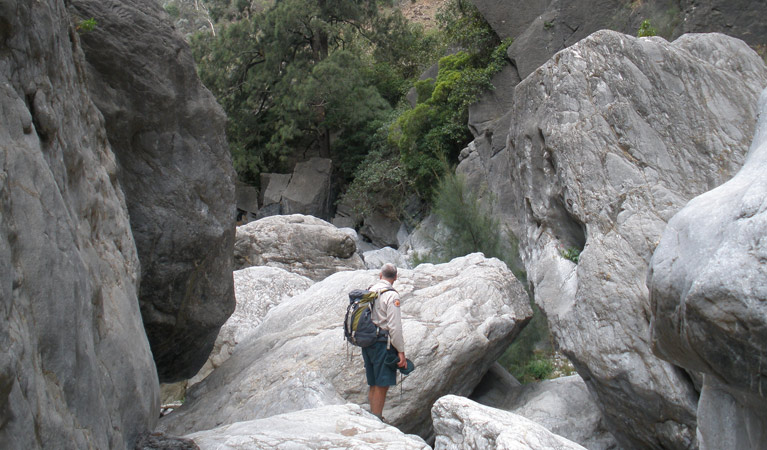 A ranger on the Red Track in Bungonia National Park. Photo: Audrey Kutzner.

What began as a rescue mission to retrieve a fallen bushwalker on Saturday afternoon ended up as a major operation to safely return at least 17 bushwalkers who had run out of water and supplies as the temperature reached 35 degrees in Bungonia National Park.

The 32-year-old woman, about whom emergency services had first received a call for, had fallen while walking the Red Track and was thought to have suffered spinal injuries.

A doctor who was also bushwalking in the area treated the woman before police arrived.

Due to high winds, the woman was carried by two senior constables from where she had fallen before being airlifted to Canberra Base Hospital in a stable condition. 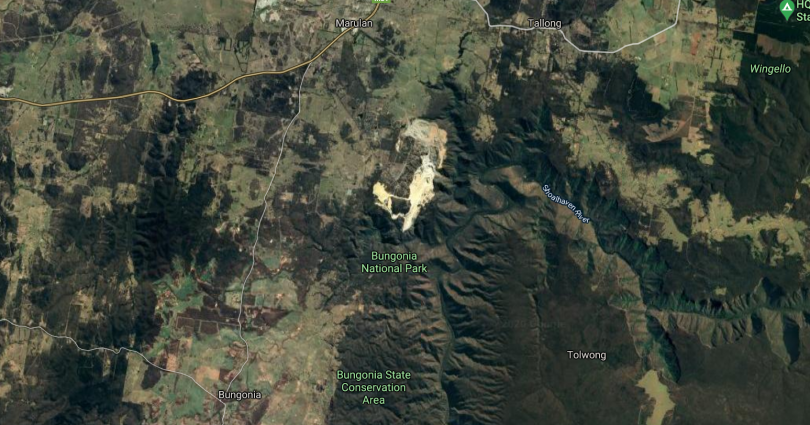 The two women were treated before being guided out of the park while the two senior constables were taken to Goulburn Base Hospital where they were treated for dehydration.

In total, Bungonia Rural Fire Brigade reported an additional 17 bushwalkers who had run out of water and supplies and needed help back to the top car park. The bushwalkers were met by an ambulance and treated.

The fire brigade had arrived to help with the rescue mission at 3:00 pm and ended up leaving the park at midnight.

Police have since issued a reminded to bushwalkers to be well-prepared, particularly as temperatures remain around 30 degrees during early summer.

Their advice is to:

Amazing that I would have to carry a GPS and an EPIRB to go hunting in a NSW state forest, but you can go bush walking with neither, and not enough water.

Probably the most pertinent advice is don’t go walking when its 35 degrees or so. Go do something else and save your walk for another time.

They appear to have forgotten extra water but I am sure they didn’t forget their mobile devices which were probably useless in that terrain anyhow..

Susie Crick - 38 seconds ago
Melva Clow yep n i live under huge gum on council naturestrip..dont start me !!! View
Samantha Leonidas - 6 minutes ago
Matt Hobson more like they told Evo to cut their budget so significantly they had to sack a third of the workforce so now the... View
Lauren Samantha - 9 minutes ago
Gerry Satrapa Definitely wasn’t a great day for a lot of people!... View
Food & Wine 16

May Welland - 23 minutes ago
Nope, i dont have dogs. They seem to frighten the birds though. I live under the flight path so have 10-15 drones flying over... View
News 1

Sam Oak - 37 minutes ago
At this point any advice about taking precautions and locking yourself up especially if you've already contracted and recover... View
Community 69

Jaffa Groube - 1 hour ago
It shows the rest of Australia that Canberra is not just politicians and public servants but ordinary folk like themselves. View
Kris Peralta - 1 hour ago
It's not the event, it's just some of the grubs that it attracts. I think a half decent track and drag strip would be better... View
Rachel Bambi Taylor - 2 hours ago
Tharren Kingston-Lee I’m not really getting into it that way, just mean that I think that’s what he is referring to View
Motoring 62

Barbara Biddle - 3 hours ago
Peter Montgomery yep so when the track is closed down the developers get a hold of it. All profit based … View
John Evans - 3 hours ago
Well if the ACT is denied a drag-strip due to noise then why not ban the raceway? Got to be consistent. View
Sandie Ann Johnston - 4 hours ago
God we are never allowed to have any fun in life. So not fair !!!!! View
News 40

Capital Retro - 4 hours ago
The smell at MLRMC where it ends up has certainly increased. View
Property 1

I know it’s a generalisation, but many Canberra residents appear to have an uncomfortable relationship with anything to do with...
News 195

‘Blackbirder’ Ben Boyd’s name to be removed from National Park

@the_riotact @The_RiotACT
Australian rules #football icons Alex Jesaulenko and Kevin Neale have #Canberra's sporting community in their corner as they take on one of the biggest battles of their lives https://t.co/0SOQQEOyLr (20 minutes ago)