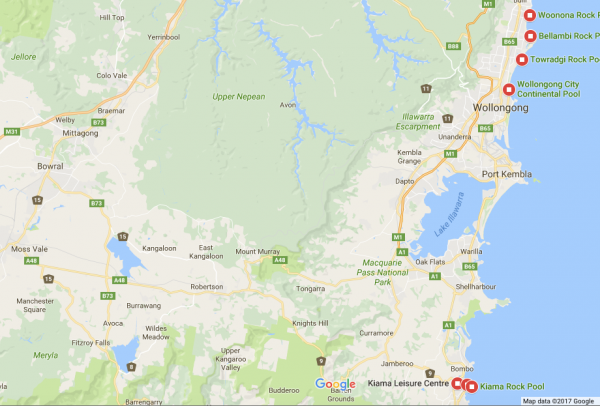 A 64-year-old man has been charged with four counts of indecently assaulting young girls at the Kiama rock pools around lunchtime yesterday.

Police were called to the Kiama rock pools near Terralong Street about 1pm following reports that a man had indecently assaulted a number of girls.

Police have been told that a man approached allegedly several young girls, engaging them in conversation, before indecently assaulting them.

The man was confronted by members of the public as he attempted to leave the pools and was detained by several people until police arrived.

Officers attached to Lake Illawarra Local Area Commanded attended and the man, who is an Indian national.

He was taken to Lake Illawarra Police Station and charged with four counts of indecent assault on a person under the age of 16.

The man was refused bail and will appear before Wollongong Local Court today.

Police are urging anyone who was at the Kiama Rock Pools yesterday and may have any information in relation to the incident to contact Crime Stoppers or Lake Illawarra Police.

Police are urging anyone with information about the alleged assaults to call Crime Stoppers on 1800 333 000 or use the Crime Stoppers online reporting page: https://nsw.crimestoppers.com.au/Information will be treated in the strictest of confidence. Police remind readers they should not report crime information via Facebook and Twitter.

Nada Krstin - 46 minutes ago
Garvin Francis OMG, your comprehension ability is rather lacking...re-read all the posts fully so you actually may understand... View
Nada Krstin - 1 hour ago
Kate Le-Goat yes I get that, and I'm all good with that - showing my covid vaccine status - but that is not the point - maybe... View
Nada Krstin - 1 hour ago
Peter Marshall what? Seriously, so please explain WHAT is the point of the covid vaccine if it is not to keep you from develo... View
News 12

Pauly Berger - 1 hour ago
Fantastic concept, visionary thinking your community should be embracing, congratulations AFC View
Gordon Arthur Truesdale - 2 hours ago
Good one!, Garry, when the machines were first mooted, I asked Lionel James about them, suggesting they would take over the c... View
Denise Bourke - 2 hours ago
Not a blessing for those supposedly buying the homes for aging. Very creative and imaginative but hardly a good match. View
News 12

Denise Bourke - 2 hours ago
insurance'll cover that Shirley View
John Killeen - 2 hours ago
At least the new electric fire trucks will always be first on-scene to a battery fire! View
Colin Mitchell - 2 hours ago
Nick Anderson and they don't have service to... View
Opinion 2

Nada Krstin - 2 hours ago
Zoya, I don’t understand why you even call these people ‘smart’? What makes them ‘smart’ – a uni education or fol... View
Community 5

Warren Warrenson - 2 hours ago
Those are some big days… carrying packs or with support vehicles etc? View
Xuan Le - 3 hours ago
I wish I knew this earlier.... View
Sport 1

@the_riotact @The_RiotACT
Are you familiar with creepy facts? If so, this ghoulish Ken Behrens #Quiz is for you! It has plenty of spooky stuff for #Halloween, plus a few other bits about Canberra and current affairs https://t.co/kjZY3kTHca (3 hours ago)

@the_riotact @The_RiotACT
Events are making a comeback to Canberra now that lockdown has eased. And the timing couldn't be better! #Oktoberfest, #Halloween and #MelbourneCup Day are just some of the highlights to stick in your diary this week https://t.co/oXZLz4Gybr (4 hours ago)