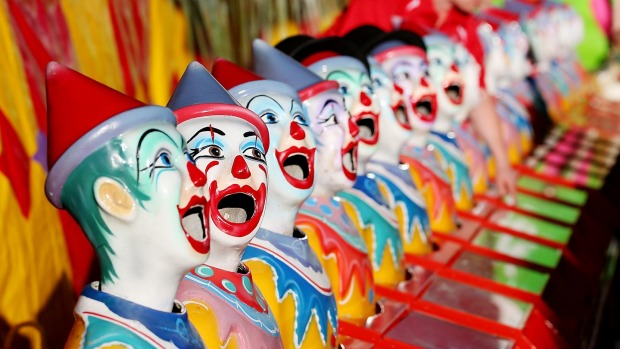 The clowns of side show ally at the Bega Show. Photo: Kate Howarth, Bega Show Society.

Politics is part of every country show. There is the tongue-in-cheek variety between Jersey and Friesian dairy farmers, between sheep and goat graziers, and between dressage horses and motorbike clubs, but room is always made for the “more serious” variety, the politics that normally takes place in a parliament house or council chamber.

In fact, country shows provide one of the few unfiltered opportunities to speak directly to our leaders.

January, February, March is show season in South East New South Wales and has been for 145 years, from Moruya Show to Bega and Cooma, the region’s politicians make a point of attending, an army of party faithful at their side with marques and billboards marked in party colours and slogans.

The Bega Show last weekend offered some respite for the region’s federal representatives, who seemed happy to be free of Canberra and were looking forward to a week were their own sex lives were a talking point.

“It was like a bowl of sweet and sour Chinese,” Labor’s Mike Kelly, Member for Eden Monaro says.

“On one hand we celebrated the tenth anniversary of the apology to the Stolen Generations, and on the other we had the other business [Barnaby Joyce affair] going on,” Dr Kelly says. 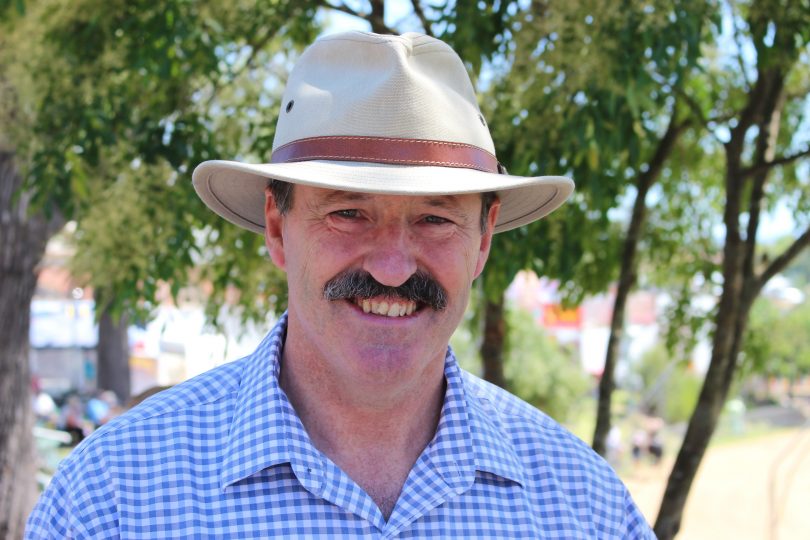 The Turnbull Government was represented at the show by new NSW Liberal Senator Jim Molan, who has just completed his first two-week parliamentary sitting.

Senator Molan has been described as the Stephen Bradbury of politics. Listed as the seventh candidate on the NSW Coalition Senate ticket at the last election, the former Army General finds himself in parliament as a result of the Section 44 citizenship saga that claimed Nationals Senator Fiona Nash.

Like Dr Kelly, Mr Molan did not want to offer direct comment on the Barnaby Joyce affair, or his own recent brush with the media where he was criticised for sharing a Facebook post from the far-right group Britain First.

“What may surprise everyone is that the Government is getting on and doing its job,” Mr Molan says.

The Government’s Veterans Affairs website says, “Veteran Centric Reform [is] to provide the veteran community with a greater standard of service through reform of business processes and culture.” 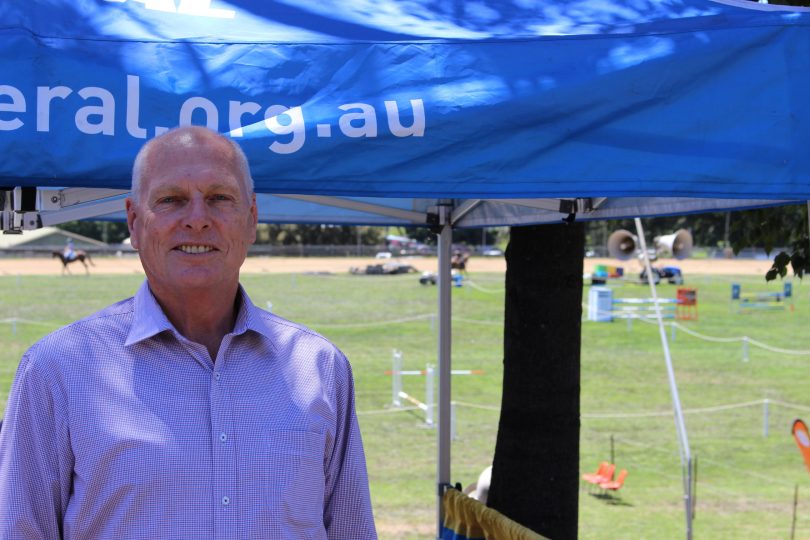 Reflecting on the work of parliament and other matters that might have been missed in the buzz around Barnaby, Dr Kelly points to the work of the Parliamentary Joint Committee on Intelligence and Security.

Last week, the Committee handed down its Review of the listing of Islamic State Khorasan Province and the re-listing of al-Murabitun as terrorist organisations under the Criminal Code.

In a nutshell, their report concluded: “Islamic State Khorasan Province and al-Murabitun continue to meet the definition of a terrorist organisation.”

Perhaps not a front-of-mind issue for showgoers over the weekend, but Dr Kelly who sits on the Committee insists that it demonstrates that politics is more than the scandal and combat we see presented in the media.

“It’s [the Joint Committee] a very bipartisan mechanism, we really do focus on the interests of the country, keeping our people safe and defeating terrorists. There is no politics there,” he says.

The red of the Labor tent sat side by side with the blue of the Liberal tent over the three days of the Bega Show. Often the different party members could be seen standing on neutral ground discussing the issues of the day or their show winning dahlias.

Passers-by were invited to raise concerns and issues, offer a view on parliament’s current agenda, or find out what’s going on for themselves.

“That’s what we are here for,” Dr Kelly says.

“Sometimes it’s good for people to just get things off their chest, I’ve learned as a Member there’s a lot of therapy you can provide by just being a decent listener.”

This grassroots demonstration of our democracy survives in a political landscape that thrives on extremes and conflict, and one that highlights difference rather than similarity. It’s a style of politics that sits comfortably alongside the giant pumpkins, decorated Arrowroots, and chainsaw racing of the show.

“And I am only new, I am not across the local issues, I am here to learn,” Senator Molan says. 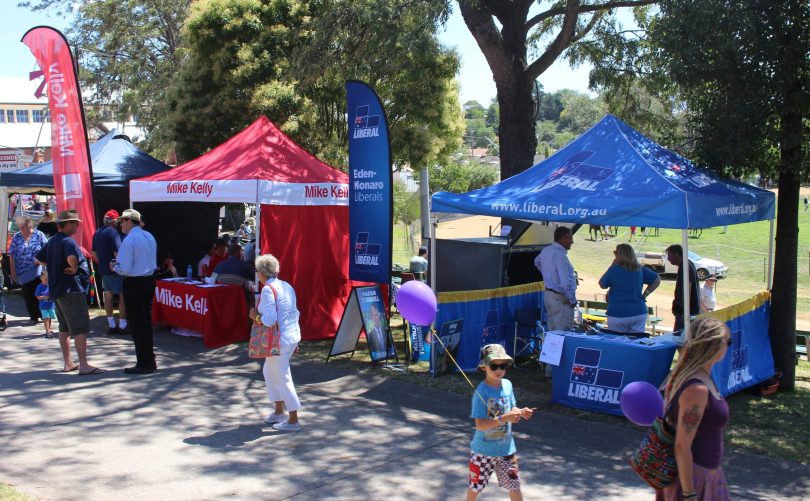 Labor and Liberal, side by side at the Bega Show, inviting discussion. Photo: Ian Campbel.

Show season rolls on this weekend with the Canberra Show, followed by Delegate, Dalgety, Cooma, and Bemboka on March 11.

Head along not just for the sideshow clowns or a pony ride, but ready to see your local politician – the invitation is there to talk to them.

It has always been a source of amusement that the National Party always has a stall at the Canberra Show when nobody in the ACT can vote for them.

Sally Asnicar - 13 minutes ago
My bum was plonked in my office chair as usual and I felt nothing. Zip. Nada. On Sydney's Upper North Shore. View
Krystyna Topor - 38 minutes ago
Helen Topor wow how unnerving. Nothing noticed by me, I'm on the ground floor. Other Sydneysiders felt tremors, however they... View
Bridget Phillips - 1 hour ago
Jorge Gatica not in Downer either. My son lives in Wadonga. My daughter in law to be said it was awful there. My 5 year old g... View
News 33

Annie Wyer - 34 minutes ago
Jesse Mahoney I tried growing a whole lot in Belconnen around my complex and they faced east, they all got powdery mildew, th... View
Jesse Mahoney - 1 hour ago
Annie Wyer I'm a post graduate trained forester with many years experience on a technical level, I know a bit about trees. Cr... View
Opinion 190

Gazza Hompepper - 43 minutes ago
Why upgrade the Canberra railway station if you cannot travel there View
Brian Kilgannon - 53 minutes ago
Moving the Kingston train station is a huge waste of money View
Brett Wheeler - 53 minutes ago
I used to love train travel but last time I tried to utilise it to go to Sydney with a pushbike, the difficulties were not wo... View
Opinion 12

Peter Bee - 1 hour ago
Craig Sutton . A big miner or something would need to under-right an NT team. The critical mass of corporate support isn’t... View
Craig Sutton - 2 hours ago
Peter Bee Tassie and Northern Australia should be the priority for the AFL. Then they'll have a truly national competition, w... View
Craig Sutton - 2 hours ago
Failed? GWS and the Lions both have 30k members which is more than most of the NRL clubs except Souths and Para. Even the Sun... View
News 12

Did anybody seriously believe that the ACT lockdown would not be extended this week, with cases oscillating between the mid-teens...
Breaking 72

@The_RiotACT @The_RiotACT
Chief Minister Andrew Barr said modelling shows #hospitalisations and deaths will increase as jurisdictions begin to reopen, even when the 70 and 80 per cent fully #vaccinated thresholds outlined in the national plan are met https://t.co/XLk2fmaq5q (55 minutes ago)

@The_RiotACT @The_RiotACT
Registered nurse Luke Roberts is about to return to work at ICU at Canberra Hospital after his challenging, yet rewarding role as coordinator/nurse for the Australian #Paralympics Team's #Medical HQ in Tokyo https://t.co/2uQpaEyZw6 (4 hours ago)