Simon and the frog. But will it turn into a princess? 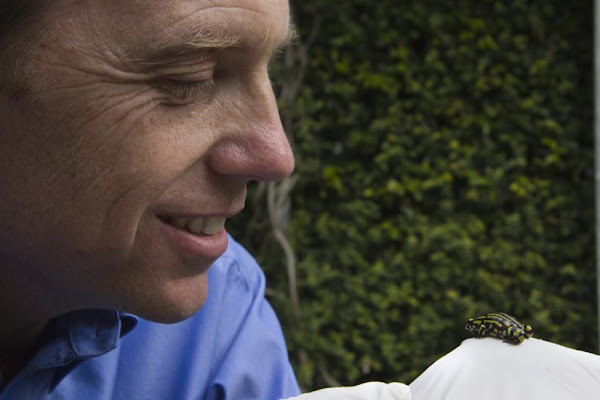 Back in 2009 the ACT Government conspired with the ABC to cook their Corroboree Frog captive breeding program fortunately things have recovered since then to the point Simon can be photographed with one of the lovely amphibians.

And he’s also announced some money in tomorrow’s budget for them:

The captive breeding program for the Northern Corroboree frog has received a life-saving boost with $101,000 allocated in the 2012-13 Budget, Minister for the Environment and Sustainable Development, Simon Corbell, announced today.

“The Government is pleased to be able to fund a program that aims to see the ongoing protection of the Northern Corroboree Frog which is in danger of becoming extinct,” Mr Corbell said.

“Surveys in the 1980s showed there were many thousands of Northern Corroboree frogs in Namadgi National Park. Now it is estimated that there are only very few remaining in the wild in the ACT, largely as the result of an introduced disease.”

“This funding will provide the necessary money to the captive breeding program to protect these important frogs so they can continue to play their part to the ACT ecosystem.”

The Northern Corroboree Frog Captive Breeding Program started in 2003 and to-date has been funded by the Commonwealth.

“With Commonwealth funding due to cease in June 2012, funding by the ACT Government is vital towards continuing this program as a way to boost wild populations and as a precaution in the event that wild populations become extinct.

Dawn Glover-Schwalm - 14 minutes ago
Til Bijou me too!! View
Deborah McCarthy - 41 minutes ago
Thankyou for sharing! 💕... View
Jane Lloyd - 2 hours ago
Love this place View
News 17

Renee Thompson - 1 hour ago
Should be entitled to both as I see it as one is purely for helping keep business a float hoping they survive the outcome and... View
Opinion 20

Jak Kanard - 1 hour ago
...it’s been the end of the line since it was first established ! Canberra has never been considered a rail destination - e... View
Property 3

chewy14 - 2 hours ago
JC, Thanks for pointing out that the ACT is not following the National Plan. And no the ACT "plan" is not nearly the same as... View
kenbehrens - 3 hours ago
Could it be that the ACT Government's Human Rights Charter prevents mandatory vaccinations? The Chief eluded to Human Rights... View
News 178

@The_RiotACT @The_RiotACT
'Brave' Sally Hopman has seen her first #snake of the season, and it was enough to drive her to drink (so at least the experience wasn't all bad) https://t.co/I12xIs6Ftp (55 minutes ago)

@The_RiotACT @The_RiotACT
A Canberra healthcare worker who recently migrated from South Africa is concerned about her work prospects because she received the #Johnson & Johnson COVID-19 #vaccine which is not recognised in Australia https://t.co/rtBJhWL0es (2 hours ago)

@The_RiotACT @The_RiotACT
The Watson community has banded together to build a pop-up #bike track for #local kids in the Irvine Street Greenway. What do you think of their efforts? https://t.co/vJnnJaMMWH (3 hours ago)