Simon announces his vision splendid for the Supreme Court 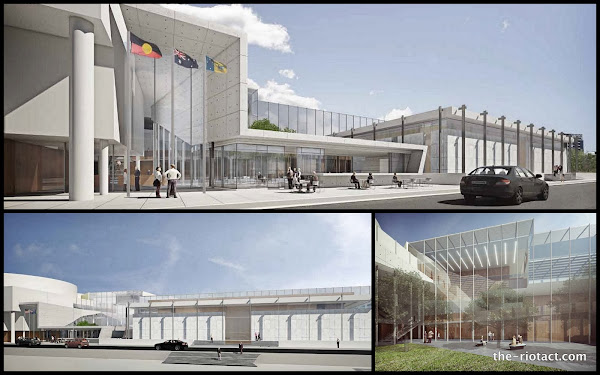 “The Supreme Court is a landmark building in the Territory and an important symbol of the judicial arm of government. The existing building recently celebrated its 50th anniversary; however the agingbuilding can no longer provide the standards of security and public amenity which is required of such an important civic building,” Mr Corbell said.

“The planning for the new ACT Courts Facilities has been comprehensive and has had to take into account a number of factors including heritage issues, planning requirements, and the requirements of the Territory’s judicial system now and 50 years into the future. These considerations have driven the concept design which will be used as a reference for the full design of the facility.

The new facility will include the following features:

— public cafeteria which will link the two existing building at the Knowles Place frontage;

— capacity to construct additional courtrooms in future years as demand increases with population growth; and

“The new ACT Courts Facilities are expected to be delivered through a Public Private Partnership agreement, the first in the Territory’s history. Work to develop an expression of interest proposal will begin early in 2014. It is expected that the new facility will be operational towards the end of the 2017-18 financial year,” Mr Corbell said.

UPDATE: The Law Society has expressed its pleasure.

And if civil actions are flooding the courts, maybe it shows all the ADR stuff could be working better (looking at YOU, ACAT !!! )

Juries do civil too. Sounds like multipurpose infrastructure to me.

“You do realise criminal law makes up only a small proportion of the court’s work load, and that a large part of it is civil law.”

OK, Build a razor wire fence around the ACT border that separates us from NSW and the rest of Australia. Which side of the fence do you want the Criminal Law outcomes to reside?

And if civil actions are flooding the courts, maybe it shows all the ADR stuff could be working better (looking at YOU, ACAT !!! )

Will Batman spend money on expanding the AMC?

Will this reno result in more custodials, rather than the current weak sentencing?

Does Batman even care?

The courts wouldn’t need a reno if there weren’t so many repeat visitors.

It actually makes sense to utilise the existing security in the magistrates courts.

Will Batman spend money on expanding the AMC?

Will this reno result in more custodials, rather than the current weak sentencing?

Does Batman even care?

The courts wouldn’t need a reno if there weren’t so many repeat visitors.

Sebastian Macri - 14 minutes ago
Wondering what that may achieve. Covid is here and not going away... View
Sarah Emmerson - 26 minutes ago
Shane Jasprizza that’s exactly my point too! View
chewy14 - 52 minutes ago
Even though I don't agree with the proposal, your example it not close to being a good comparison. You eating yourself to dea... View
News 1

Sam Oak - 25 minutes ago
What about the hazards these birds create for motorists. Hope the driver is okay and the damage to his car was covered by ins... View
Sport 133

Eric Tenthorey - 32 minutes ago
Alan Vogt interesting...in Montreal at mt rigaud you had to pay to access the trails...no lifts. View
Alan Vogt - 1 hour ago
I have travelled and raced at a good number of mountain bike destinations in British Columbia (including Squamish, Whistler,... View
Jim Reid - 2 hours ago
ACT Govt doesn’t need any more $$ they’re literally the worst financial managers and they wouldn’t be transparent as to... View
Opinion 19

chewy14 - 42 minutes ago
4 ACT senators? I must have missed that change, haha. Although I agree with you about the base politics and disingenuous argu... View
Acton - 3 hours ago
Zed is only one of 4 ACT senators so why don't one of the others sponsor a bill? It can't just be the fault of the Morrison L... View
TheSilver - 4 hours ago
How about the government stop restricting freedom of association, freedom of movement, the right to privacy and freedom of sp... View
News 42

Renea Hazel - 55 minutes ago
Judith Devitt he is an excellent school principal, this is disappointing :( View
Kieran Angus - 2 hours ago
Rade Kosa yeah and? We get boosters of a bunch of vaccinations? Tetanus is a good example. View
Rade Kosa - 2 hours ago
Kieran Angus one word boosters. 😉 View
Community 24

Lindi Loo - 2 hours ago
Are these two 'paid actors'? If not, they should be! Brilliant 😂👏... View
Emily O'Shea - 3 hours ago
Jen O'Shea watch the video in this View
Lifestyle 10

@the_riotact @The_RiotACT
The ACT Property Council and @MBA_Canberra are concerned that the Territory's #construction sector - which they say could lead the economic recovery after lockdown - is suffering from a loss of skilled #workers to Melbourne and Sydney https://t.co/VM8wwQwYsS (46 minutes ago)