Simon Crean buries the Hawke Review response in the budget 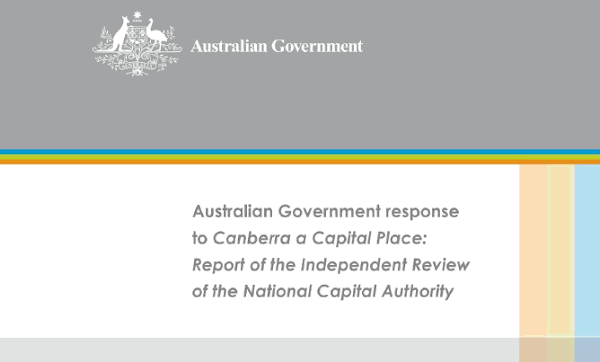 Yesterday we noted there was news on the National Capital Authority getting some much needed money in exchange for making life easier for property developers.

Today it becomes clear that Simon Crean has announced this as part of the Government response to the Hawke review.

“The report’s recommendations included simplifying the planning system and better recognising the role of the ACT Government, developing a five-year plan of information and education activities and refining the NCA’s role in fostering awareness of Canberra as the national capital,” Mr Crean said.

“Canberra is a place of symbolic importance to the Australian people and the Federal Government recognises it has a role to play to preserve and enhance that national interest.

“Canberra is both the nation’s capital and a city in its own right and this brings its own set of challenges and emphasises the need for strong partnerships underpinned by clear responsibilities, arrangements and processes.

“We are pleased and welcome the recommendation that the NCA and the ACT Government work together to review principal areas of responsibility and also agrees that the NCA Board be restructured to permit an ACT community representative to be nominated on to the NCA Board.”

“The Property Council has advocated for some years that this occur, and so this is particularly welcome news,” Ms Carter said.

Many of the changes recommended will require amendments to the enabling NCA Act and also changes to the ACT Territory Plan.

“The Property Council looks forward to working with both the NCA and the ACT Government to ensure that positive outcomes are achieved for the benefit of both the local community and for Canberra as the nation’s capital,” Ms Carter concluded.

Code Assessment has been in for years in the ACT and pretty much no one noticed. The thing with code assessment is that there needs to be a code. The code has to take into account all issues and it cannot adequately take neighbouring amenity into account.

There’s really no way that codes can work in complex applications like single block infil proposals and re-development.

No need to get too concerned about someone building something next to you without consultation.

Recommendation 12 is a bit of a concern. It was the Development Assessment Forum (DAF) that has introduced Code Track assessment of development applications. Under Code track assessment, in the ACT Planning & Development Act, there is no need for notification and there are no Third Party Appeal rights. The NCA would not have put the development out for consultation on its website. Under Code exempt there is no need for a development application if the private certifier signs off on it. This is a developer’s dream as the all you need to do is pay the certifier, pay ACTPLA fees, demolish and build.
The Property Council thinks there is too much consultation and does not even want minutes of the Industry Monitoring Group publicised.
Recommendations 23 & 24 are necessary for proposals to be out for consultation before being put to the Canberra National Memorials Committee. Proposals such as the Immigration Bridge and the WW1 & WW2 Memorials should have gone through this transparent process.

In gaining an efficiency dividend, could we sack the poet laureates who come up with cliched public service titles?

Geoff N Narelle - 41 minutes ago
I think that the author of the article has romanticised the story somewhat. It was probably a 20 minute bike ride each way on... View
Food & Wine 3

@The_RiotACT @The_RiotACT
Opposition Leader Elizabeth Lee will introduce an amendment to the ACT Crimes Act today to make it an offence to 'stealth', the act of removing a condom during sex without consent https://t.co/jFSIrItv88 (46 minutes ago)