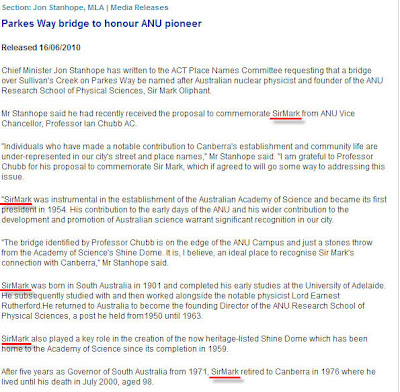 Earlier in the day we noted admirable efforts to commemorate Sir Mark Oliphant.

Only keen eyed readers noticed a strange style miss in the media release:

At 12:20 Skidbladnir took the above screenshot where an early remedial effort is under way.

Typos? That is what you get when you close down schools Mr Barr.

I guess you can’t have literate staff AND homosexual marriages at the same time. It’s a matter of priorities.

Is this the same department that had to pull an infrastructure plan because of typos? Perhaps their latest work-experience boy can’t simultaneously make coffee and proofread.

This is the American way which we so slavishly follow these days. Take a look at the message from the Las Vegas Hotel I recently received:

‘Bellagio is proud to welcome the Founder and President of Virgin Atlantic, Sir Richard Branson, to Las Vegas and congratulate him on the airline’s 10th anniversary of flights between Londonand Las Vegas. We are grateful to Sir Branson and his team for their support of Las Vegas. In celebration of this anniversary, Sir Branson will make a special appearance tomorrow morning at 9:15 a.m. on Bellagio’s iconic lake at the entrance to our resort. We hope you enjoy this special performance with Sir Richard Branson and The Fountains of Bellagio! This celebratory event will last approximately 10 minutes.’

After five years as Governor of South Australia from 1971, Oliphant retired to Canberra in 1976 where he lived until his death in July 2000, aged 98

I could be wrong, but I thought Sir Mark lived in Adelaide until the death of his wife in the late 80s

I hadn’t come across a “Sir” preceding a surname only, before. I would have thought you would say “Sir Mark” or “Sir Mark Oliphant”. My father-in-law was never addressed with just the surname after the “Sir”. None of my other “Sir” acquaintances were called by their surnames alone either (I worked for Westerman, Crawford and Coombs and was a neighbour of Ennor, White and Eccles). Perhaps things have changed.

Anyway, I am not in favour of knighthoods.

I notice its all fixed now on the CM’s website.

As of 1325hrs it isnt, there is still one “SirMark” in the Release (second paragraph).
Mr Stanhope said he had recently received the proposal to commemorate SirMark from ANU Vice Chancellor, Professor Ian Chubb AC.

#2, I think if you’re trumpeting the fact that you’re honouring someone you might take the care to get the name and title correct. I suspect this wasn’t proofread at all, just spell checked.

I notice its all fixed now on the CM’s website.

the gesture is a grand one, and appropriate. the office sir elephant previously inhabited, i must say, has though one of the best views of an office in canberra. 😉

Chief Minister Jon Stanhope has written to the ACT Place Names Committee requesting that a bridge over Sullivan’s Creek on Parkes Way be named after Australian nuclear physicist and founder of the ANU Research School of Physical Sciences, Sir Mark Oliphant.

“Individuals who have made a notable contribution to Canberra’s establishment and community life are under-represented in our city’s street and place names,” Mr Stanhope said. “I am grateful to Professor Chubb for his proposal to commemorate Sir Oliphant, which if agreed to will go some way to addressing this issue.

“The bridge identified by Professor Chubb is on the edge of the ANU Campus and just a stones throw from the Academy of Science’s Shine Dome. It is, I believe, an ideal place to recognise Sir Oliphant’s connection with Canberra,” Mr Stanhope said.

Sir Oliphant was born in South Australia in 1901 and completed his early studies at the University of Adelaide. He subsequently studied with and then worked alongside the notable physicist Lord Earnest Rutherford. Oliphant returned to Australia to become the founding Director of the ANU Research School of Physical Sciences, a post he held from1950 until 1963.

Oliphant also played a key role in the creation of the now heritage-listed Shine Dome which has been home to the Academy of Science since its completion in 1959.

After five years as Governor of South Australia from 1971, Oliphant retired to Canberra in 1976 where he lived until his death in July 2000, aged 98.

What is wrong with Communications in the ACT? This government really is ‘no-hope’.

Annette Hemsley - 54 minutes ago
Should be up to each business to choose what they want to do and it’s also the choice of each person if they go into an est... View
Capital Retro - 3 hours ago
I recently discovered some old papers belonging to my late father. Among them was an "Identity Card" Form C.R.3 which was iss... View
Hans Dimpel - 6 hours ago
Tod Davis which rules and who is speaking them? Are you sure you aren't being influenced by rightwing conspiracy pages with a... View
News 138

@The_RiotACT @The_RiotACT
If you've even been swooped by a #maggie, spare a thought for delivery #drones in Harrison. Some streets have had their deliveries suspended because of a territorial raven. Watch the video here https://t.co/Kx5ofNBuWF (2 hours ago)