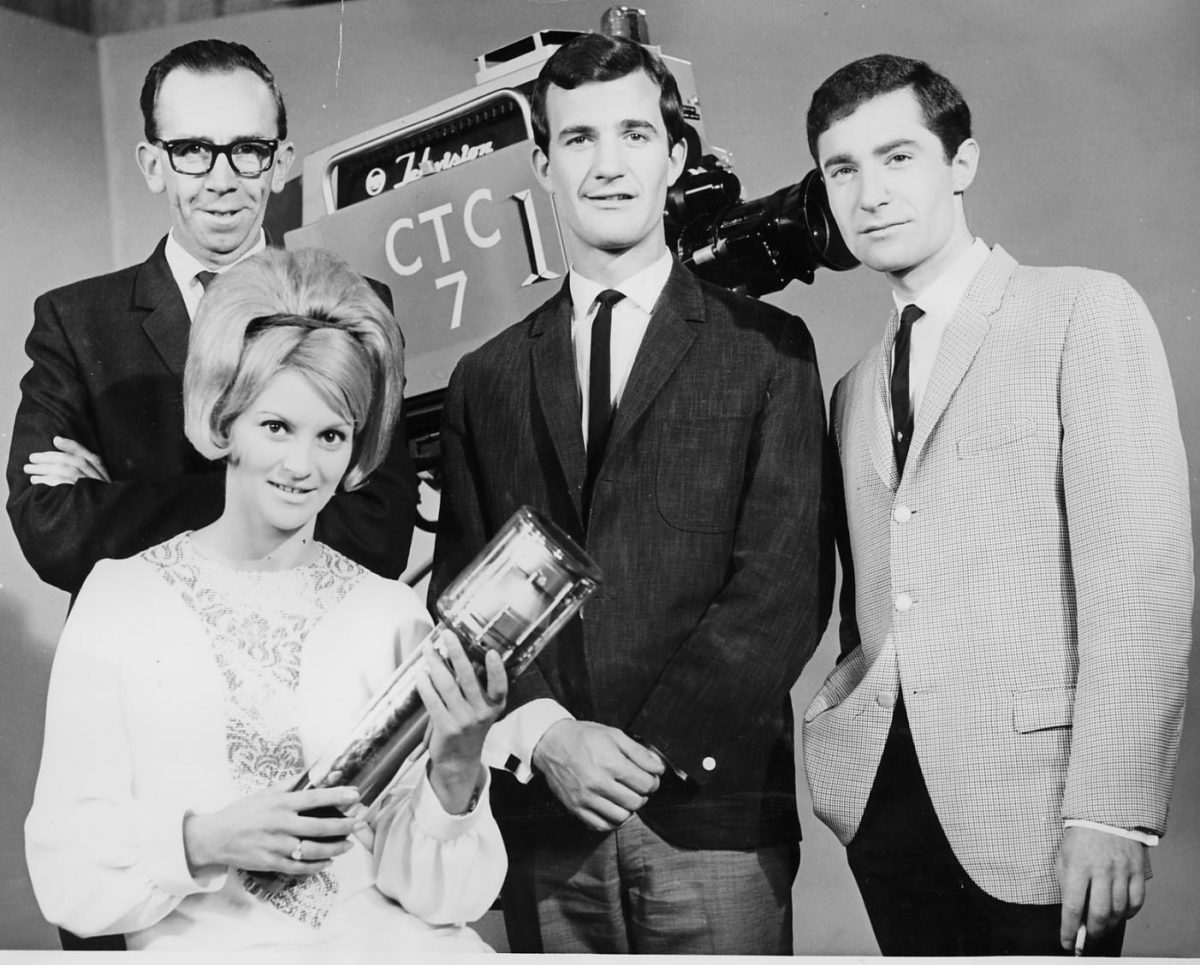 As a cine-cameraman for the city’s first commercial TV station CTC 7, Michael Barnett has watched Canberra evolve with a first-person view rarely seen by others.

He recorded the news of the city before it had really come of age, providing the capital with a sense of community in its earliest of days.

“I really feel fortunate to be part of that time,” he said. “Television brought a real sense of community to Canberra back then, and I was lucky enough to see all that evolve. 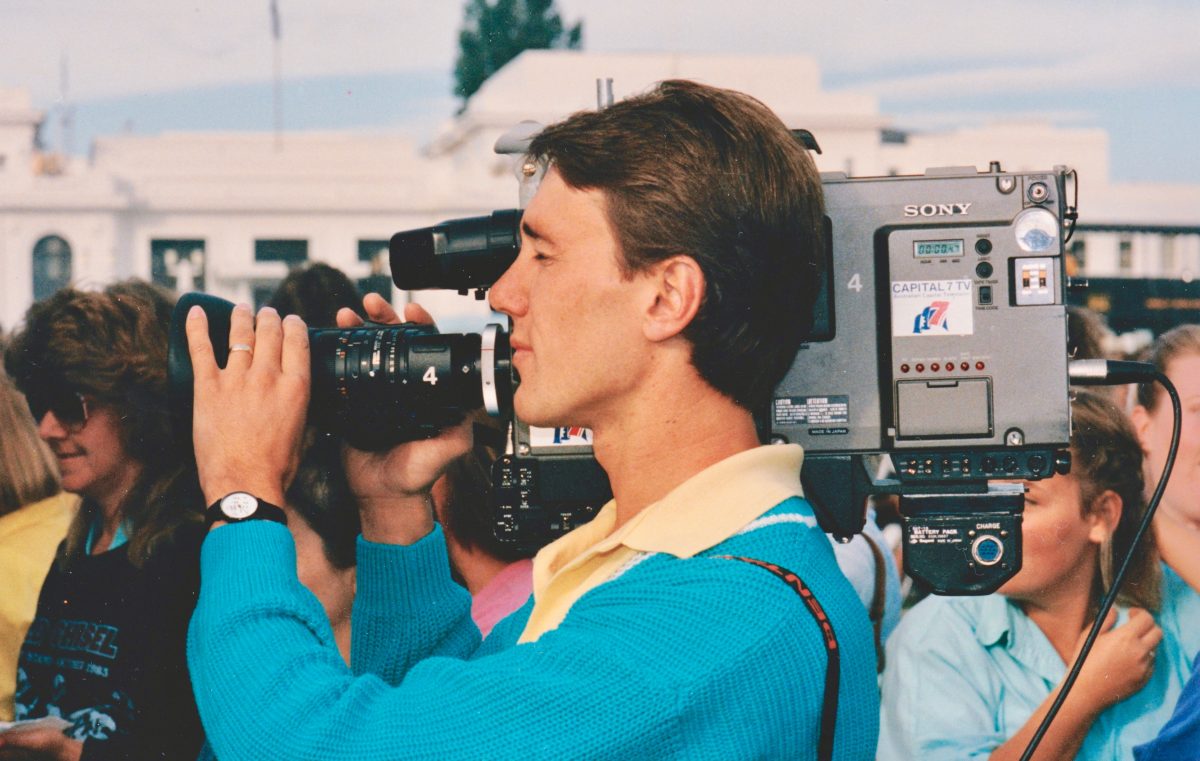 A young Michael Barnett at work as a CTC 7 Canberra cameraman back in 1988 outside Old Parliament House. Michael worked for the station from 1981 to 1996. Photo: Supplied.

He may have been lucky, but his perseverance in getting a job in TV was impressive. From age 13 onwards, he started writing letters to station management, asking for a job.

“I would hassle them with letters every three months or so and they eventually put me on as a trainee,” he said.

“I have reason to be very grateful to them – this wonderful job has taken me all around the world. When you work for what was then a little station, it lets you be part of the community.”

One of Michael’s fondest memories of early life in Canberra was the day after Rosemary Follett was elected Chief Minister of the ACT in 1989 – the first woman to do so in the nation’s history.

“They wanted footage of her having breakfast so I went around to her place, but she was running late after such a big night so I ended up making her tea and putting the toast on,” he said.

“She drank the tea while reading the newspaper headlines about her win.” 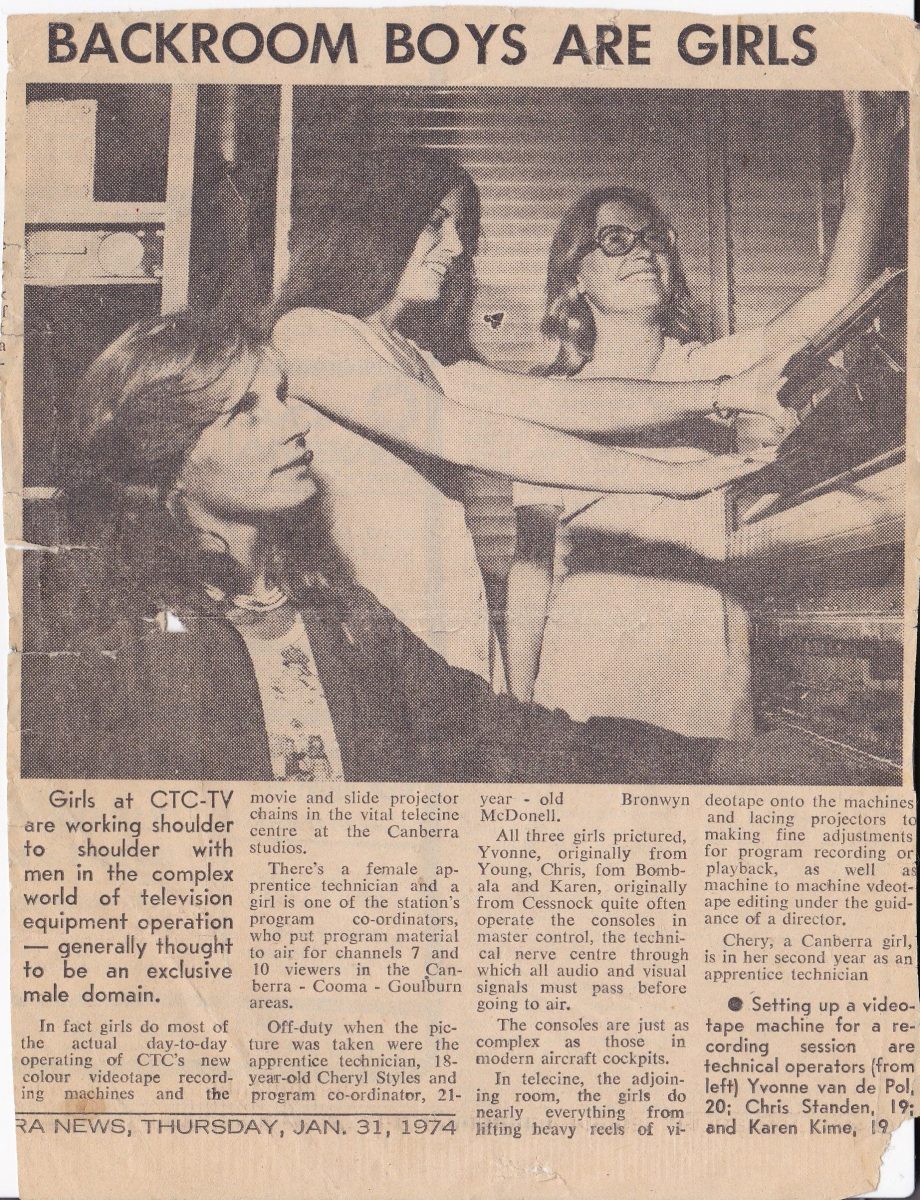 CTC TV Canberra “girls” were featured in a 1974 story in the Canberra News. Photo: Karen Kime.

The 60th reunion also has special meaning for Karen Neill nee Kime who got her start in TV thanks, she says, to the foresight of CTC’s founder and managing director George Barlin.

“I was about 15 at Watson High School and the teachers had just told my mother and father that I probably wouldn’t get through the School Certificate exam,” she said.

As luck/fate would have it, George Barlin had just visited the school, looking for bright young things to employ at the fledgling station.

“The teachers told my parents that the best opportunity for me would be to work as a technical operator at CTC.

“So we all met up at Black Mountain, went into this room, and were given a notebook. They showed us how to read monitors, they had us do transmitter reads and then document them.”

Working with a group of other girls, the team even made the local paper in a story about them, headlined Backroom Boys are Girls, in a 1974 edition of Canberra News. The women were praised as “actually” doing the work of men operating the complex video machines, “generally thought to be an exclusive male domain”.

Sadly, the story missed the best bit: they were the first women in the southern hemisphere to be trained as TV technicians. 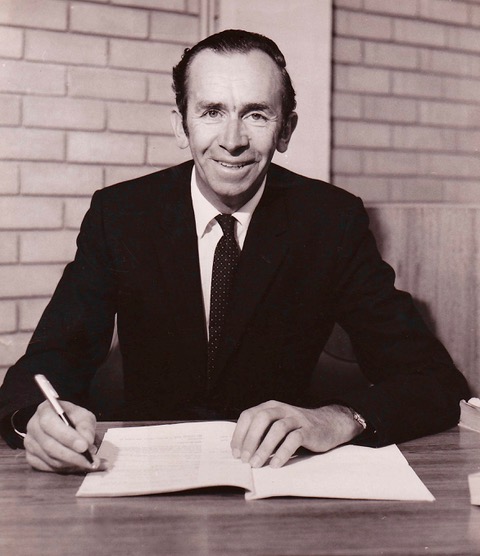 Des Nicholas was the senior newsreader and the first newsreader on the new station. Photo: Rod Nicholas.

“George Barlin was very progressive for the time,” Karen said. “He thought women would be good working in technical areas – and he was right.”

Karen said CTC 7 staff were often asked to do what today would seem impossible considering the limited equipment they had at hand. Advertisements would be broadcast live-to-air, regardless of whether they were for a car, cigarettes or Brylcreem. Whatever it was had to be physically brought into the studio.

Even the test pattern paid its way, apparently the new TV audience found it so popular advertisers paid to put their products on it. 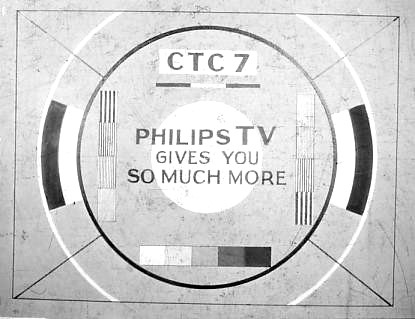 Test patterns were so popular in Canberra’s early days of TV that advertisers paid to have their products promoted on them. Photo: Michael Barnett.

There was, according to Karen, never a dull moment. Even when it came to sport, that also went live to air with two machines needed for anything as complicated as a replay.

“We had to load the projector up during a commercial break,” Karen said. “Everything we did was live.

“We used a chinagraph pencil on the tape to edit it. You had to have good motor skills and timing to know when to press the edit button just as the china pencil came through.”

It is these stories of the fledgling TV network that Michael and Karen said they were looking forward to reminiscing about on 4 June.

Organisers say a big crowd is expected for the reunion with many former employees coming from across Australia for the event.

Saturday night’s reunion is booked out but people with a connection to CTC-TV are invited to join its Facebook page.

This article has just been brought to my attention by a friend in Italy. We were schoolmates in Canberra in the 1950’s. I started work at CTC7 in April 1962 as an accounts clerk and spent my first weeks in the 2CA studios before the television Station building on top of Black Mountain could be occupied. For the next 3+ years I watched the station develop and grow from black and white images to colour and travelled up and down the mountain to work; on the then dirt road in a Pioneer Tour’s bus. There are many great stories to tell about those wonderful pioneering days; too many to relate here, sadly. I am now located on the Sunshine Coast in QLD and unable to attend the function at this short notice but send my best wishes to all concerned. Thanks for the memories.

I remember doing The Mexican Hat Dance on the opening with Leveda Carter. Was very exciting

Yes Peter it was fun I was there over 10 years 

I remember watching the opening on my best friend’s family’s tv. So awesome for a child

Great article. CTC7 brought us to Canberra when our father – Des Nicholas – became the first newsreader on the new station – broadcast from the station atop Black Mtn. Among other things dad compared the aussie rules footy (the VFL) when it was broadcast live, and ‘starred’ in many an advertisement. CTC7 was the only station we had in young Canberra for a while, until joined by ABC3.

Australia transitioned from pounds to dollars and decimal currency in 1966.

Robert John. Remember when we worked there. Fun days.

Peter, did you and Robert get an invite to the reunion?

What great memories when we were young

I remember, Peter, when Robert took us up Black Mountain in his Prefect to show us the station, but he had to let us out to walk up the steeper part of the road because he was afraid the car wouldn’t make it all the way up with the extra passenger weight. 😁😁😁

I remember singing on CTC7…🤣

Will Newby59 minutes ago