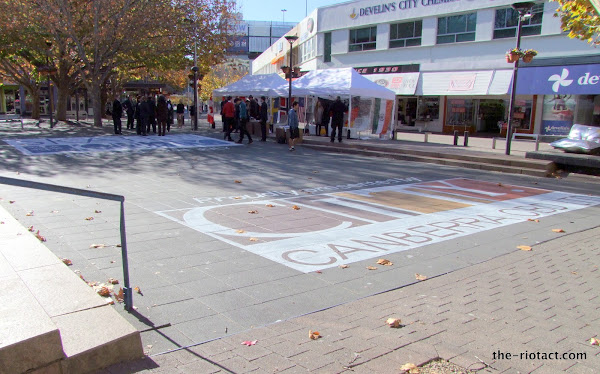 Canberra’s worst kept secret is having its media launch in a few minutes so here we go.

A bigger ice rink is going in Garema Place this winter for some skating fun.

More details in a minute.

UPDATE 23/05/12 10:11 So now we’ve got a media release which tells us the rink is increasing to 400 square metres and will have a dedicated children’s area.

Also there will be “cultural sundays” to celebrate those nice ice skating cultures. And India (no really).

Adult tickets will be $15 which makes for a pretty solid cheap date followed by dinner and a drink in the city if you ask me.

It’s being funded by Canberra CBD Ltd (where you can book tickets), the ACT Government, and ActewAGL.

Following the success of last year’s inaugural Skate in the City, which attracted almost 20,000 participants, the rink size has been increased and will feature a fresh new shape and incorporate a dedicated area for children.

In total 196 sessions of ice skating will be held across the month with daily sessions commencing from 10am til 9.30pm, with late night session til 11.30pm running on Friday and Saturday nights.

The 2012 event will include the return of the Canberra Centre Fashion Parades on Ice, ice shows, themed movie nights and an improved party lounge providing an ideal space for participants to unwind after a session or family groups. Penguin skating aids will also make a welcome return in 2012 for novices, children and those uncertain about their ice skating ability. Advance bookings of penguins are encouraged due to their popularity.

Anecdotal evidence from heath professionals suggests that the broken bone clinic at Canberra Hospital was very busy while the rink was there last year: kids, if you’re Skating in the City this year don’t forget your Medicare card.

I think it’s fantastic. A great way to turn Canberra’s cold winters into a positive and brighten up Garema place.

I thought it was pretty good last year. went a few times. Much more enjoyable than Phillip IMO. A bigger rink would be ideal, but maybe the trees don’t allow for it….

I think its exactly the sort of thing we need in the city to revitalise it, instead of spending wintery nights at home whinging about stuff on the internet.

A distraction from the ongoing homogenisation of civic and a finger in the dyke against online shopping.

I thought last year’s toe-in-the-water venture was pretty good. Sure the installation was ugly and the rink was on the small side, but it certainly injected some life into what is otherwise a desolate and miserable open space – especially on Friday/Saturday night.

If this year’s install can improve on size and not look like a gypsy camp then so much the better.

It was too expensive last year. What they need is a ‘tasting’ ticket – like 20 min for $5 or something; serious iceskaters arent going to use this over Philip; people wanting to ‘give it a go’ wont pay $15.

And a cheap family ticket – would like to take my kids but dont want to pay $44 for them to last 20 minutes and give up. They arent going to use the 90 minute session

Get more people doing it but cheaper per person.

I saw some 15 year old punk fall right on his arse and it was awesome.

Did very well last year for the ice skating.

Eileen Woodward - 2 minutes ago
To everyone who says they are not native and should be controlled. I hope you are a regular sponsor or donate to Canberra Str... View
Simon Troman - 19 minutes ago
Noelle Waugh There was a study like this in Hobart where one owner swore their cat never roamed. First night with the tracker... View
Vanessa Parton - 50 minutes ago
There are many facts of the operation of Canberra Street Cat Alliance that have sadly been omitted from this article which ce... View
Lifestyle 25

Omer Seker - 17 minutes ago
The roll out of these scooters in Canberra are a waste of money. There are people out here not parking these scooters appropr... View
News 4

Lynn Stape - 3 hours ago
Hung Ton Belconnen Mall is down right scary with all the people who cram into it without any thought to current events... but... View
News 1

Lin Van Oevelen - 5 hours ago
Andrea Kerr It's a shame to hear it had a negative effect on productivity in your area, Andrea. That would've been difficult... View
Julie Maynard - 13 hours ago
News my dogs would be very happy with! 😂 View
Andrea Kerr - 14 hours ago
Lin Van Oevelen my personal experience is people are no where near as effective when working from home, output is significant... View
Lifestyle 6

Slobodan Paunovic - 15 hours ago
Michael Cameron POLETITIONS AND experiments by scientist is killing people and it will destroy the world soon.. View
Brooke Jane Good-oloughlin - 19 hours ago
Jean Davies super healthy but my standards are to high to be a poster girl. Thanks though! View
News 12

Elizabeth Mulholland Porritt - 15 hours ago
The pilot should be well aware of the static risk of landing his aircraft! Known issue, not something isolated to this aircra... View
Opinion 7

Patricia Bourke - 17 hours ago
It’s disgusting. We have the money that just on things like Corman to fly around the world I know that’s federal but the... View
News 4

Ruby Stead - 17 hours ago
Wow this is great! View
Lifestyle 1

Lauren Ogden - 18 hours ago
Lauren Ogden We saw this one in the hills behind Corin Forest today! View
show more show less
*Results are based on activity within last 7 days

Christmas is around the corner, which means Christmas parties (albeit COVID-19-era versions) are in full swing. For a vegetarian like...
Community 99

A mega colony of 47 cats roam an industrial area of Fyshwick they call home. The street cats are in...
Opinion 43

As summer approaches, ACT police are warning us that more Canberrans than ever have been caught speeding. They say, rightly,...
News 26

The ACT Government will become the first in Australia to be able to declare public events single-use plastic-free under a...
Lifestyle 25

If you are looking for a restaurant to celebrate that special occasion, then you have come to the right place!...
News 34

The revelations about alleged war crimes in Afghanistan by members of Australia's Special Air Service regiment is a big wake-up...
Business 15

One year ago, Glenys Beauchamp was Secretary of the Department of Health, preparing for her upcoming retirement after nearly 40...

Skating for all ages and abilities outside the Legislative Assembly

@The_RiotACT @The_RiotACT
New Greens MLA Jo Clay has called on the government to withdraw financial support from the horse racing industry in the ACT https://t.co/xi5Au3JEhS (1 hour ago)

@The_RiotACT @The_RiotACT
North Ainslie Primary School is setting a benchmark for school playgrounds after raising more than $50,000 and winning a sustainability award https://t.co/fhS21o2fAf (2 hours ago)

@The_RiotACT @The_RiotACT
This elegant 1930s home in a premium position in Ainslie is fully renovated but has retained the beautiful features of the era in which it was built https://t.co/4MCzPbL3wh (3 hours ago)