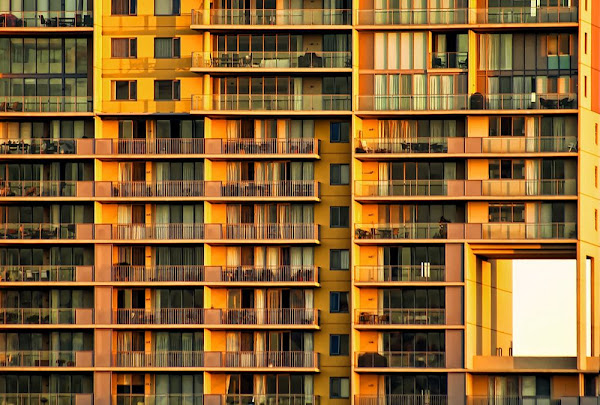 Martyo has sent in this shot of Woden at sunset a week ago.

+1. Looks like it could be from a slum in Rio or SE Asia or somewhere. Although the lack of washing on the balconies probably gives it away.

This photo really emphasises the hole in the buildimg – makes it look like they forgot to add some rooms.

Yes, what a depressing sight. God I hate that buidling. Just rises up out of nowhere, all on it’s own. Which leads you to believe that its lonesome state won’t last too long into the future. And what’s with the big “hole” they built into the design? Does it have any use – can you get out there – probably not. Just makes it look even dodgier.

Is that Lara Bingle in the window?????

This photo really emphasises the hole in the buildimg – makes it look like they forgot to add some rooms.

I live in hope that one day they’ll glass in both sides of that and build the scariest squash court in the ACT.

Ugly ugly building. I can’t believe they left that hole when they could have squeezed in some more profit-making apartments. I love 1967’s idea of the scary squash court! And strangely I like the photo. Great colour and patterns. It works, in a Hong Kongesque way. In reality, like Madam Cholet said, it just sticks out by itself. Oh, not that I’m suggesting it would look better if they built some more like it around it!

I own a unit here, what a bloody nightmare, when it came time re-sell no one wanted to buy it, the only way we could sell it was at a massive loss so we just kept it and rent it out at some absurd amount per week. The place leaks after a lot of rain and every hallway stinks of curry.

Come on people, a modicum of high-rise close to city centres frees up more houses in the suburbs for normal people.

Building looks really nice from the slopes of Mount Taylor.

I haven’t seen it look nice from anywhere else. Up close it’s very odd.

At least 10 apartments for sale on Allhomes today (98 Corinna). 4 for rent.

Lovely shot of the vertical slum.

I’ve heard there are public housing units in there as well. Makes the above song – the theme from Weeds – even more appropriate.

You actually ‘can’ polish a turd.

They tested the theory on Mythbusters:
http://www.youtube.com/watch?v=yiJ9fy1qSFI

And you can easily roll it in glitter!

+1. Looks like it could be from a slum in Rio or SE Asia or somewhere. Although the lack of washing on the balconies probably gives it away.

I was about to write that it looks like something out of a Rio favala but djk pretty much beat me to it. It also reminds me of the high rise estate i grew up on in communist Poland – good memories

I actually think SkyPlaza pretty good – better high rise than crappy low rise developments on the outskirts. In theory anyway. Problem is, in the ACT a lot of developers are so shoddy and a lot of what they come up with is poor quality. Yes, shoddiness takes all forms but in high rises the shoddiness is just more apparent for lots of people to see.

Chris Cross - 11 hours ago
Yep... and they sucked out thousands of public servants as well, yet our economy still leads the way regardless of the pork-b... View
Giles Tranter - 19 hours ago
Certainly raises some questions about the legality of the decision making process https://www.afr.com/politics/federal/sports... View
rationalobserver - 23 hours ago
So what if the departments recommendations were not fully accepted? The job of the department is to help inform the decision.... View
News 4

Nicholas Spence - 12 hours ago
Yeah, he's the Chief Minister. So yeah I'd like to hear what he has to say on such a significant issue. Especially since his... View
Malcolmo Oz - 12 hours ago
Nicholas Spence Why? Do you expect him to step in and overrule ACT gaming regulatory approvals? View
Peter Marshall - 1 day ago
That's not a good casino... View
Opinion 115

Gerda Lawrence - 23 hours ago
Fiona Tan hopeful they survive View
Anna Smith - 24 hours ago
That's it! I'm coming over there and saving all the platyes. View
Stephanie Moore - 24 hours ago
Ali Bear yes, I know & I’m so pleased about the measures they are taking to help protect this and other species through the... View
Lifestyle 4

Judy Costello - 2 days ago
So a prior liberal candidate criticises the ACT government.... with no disclosure of political allegiances or independent rea... View
show more show less
*Results are based on activity within last 7 days

No homes were lost in yesterday's (23 January) fire around Canberra Airport on what Chief Minister Andrew Barr and Emergency...
Food & Wine 0

@The_RiotACT @The_RiotACT
Ever dreamed about living in an old church? This lovingly restored home on the outskirts of Young is both energy efficient and enticing https://t.co/AtaREPopIf (1 hour ago)

@The_RiotACT @The_RiotACT
Is Canberra in with a shot at #Hottest100 glory this year? Here's a look at the contenders https://t.co/30O8l8PZon (11 hours ago)

@The_RiotACT @The_RiotACT
#WildTalk offers support to the 60,000+ Australians volunteering in wildlife rescue & rehab who are at real risk of burn-out https://t.co/p97dx5DcuU (12 hours ago)