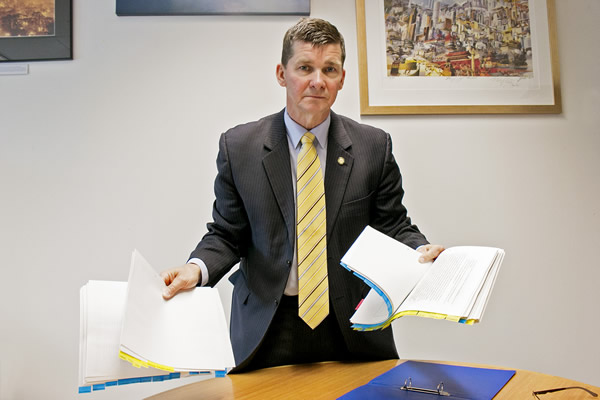 Shadow arts minister Brendan Smyth says it is hypocritical of chief minister Andrew Barr to slam federal government cuts to national institutions while making his own to ACT cultural institutions.

But arts minister Chris Bourke vehemently rejected the charge, describing it as inept at best, and at worst, “a deliberate misrepresentation of the facts”.

Smyth said: “It should be a serious cause for concern that in response to a question today, the chief minister seemed unaware of multiple job cuts inside the Cultural Facilities Corporation.

No loss of full-time staff

“Andrew Barr’s decision to cut staff inside the CFC shows he doesn’t care about the preservation of unique Canberra assets and showcasing them for local residents as well as visitors from around the country and overseas.

“However, Mr Barr seems quite happy to criticise the Commonwealth for the same thing he has just done.”

But Bourke hit back at Smyth’s assessment, saying there had been no loss of full-time staff at the Cultural Facilities Corporation.

“For the Opposition to suggest otherwise is at best ineptitude in reading budget papers, at worst a deliberate misrepresentation of the facts. Either way, it shows they are completely unfit to govern,” he said.

“The budget papers very clearly state that the high number of casuals employed, as well as the variations in patterns of casual employment, make a definitive full time equivalent (FTE) figure difficult to determine. The 2016-17 budget and the 2015-16 estimated outcome FTEs have been calculated on the basis of expectations of staffing – especially causal employment – at these times.

“As the CFC staffs the Canberra Theatre Centre, which has a high number of casual staff due to the nature of its business, it is very difficult for the CFC to accurately estimate how many FTE staff will be required over the year to come.

“This is more of a reflection of the workload at the theatre and the nature of the industry, than anything else.”

Acton - 57 minutes ago
As baby boomers pass into the final stage of life we will need more palliative care at hospitals, hospices and especially at... View
Breaking 1