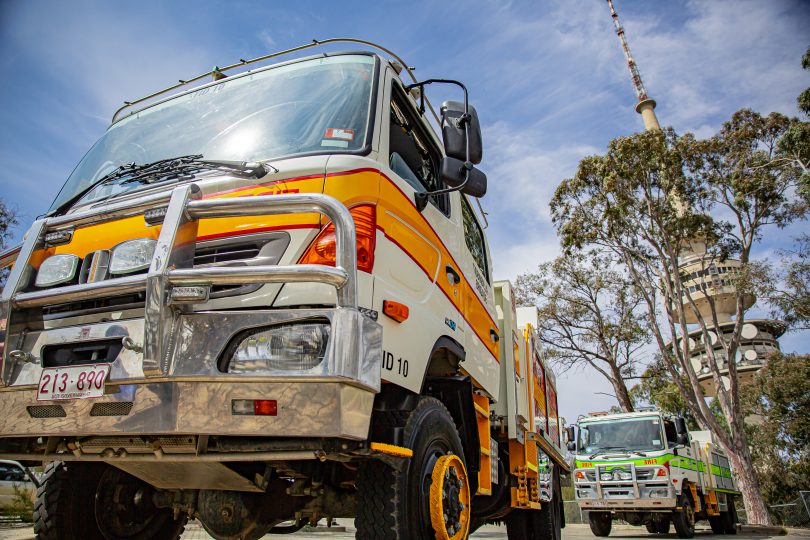 Changes have been made to the ACT’s Bushfire Management Zones. Photo: File.

If you live on the edge of a reserve or an outer perimeter of a Canberra suburb, changes to the ACT’s Bushfire Management Zones means the area from your back fence could become part of a buffer zone in the event of a serious bushfire.

The intricacies of the new zones mean firefighters will work with residents in a number of asset protection zones to protect homes on the urban fringe from bushfire.

More information is on these zones is on the ACT Government’s bushfire management plan webpage.

The asset protection zones identify the areas that are actively managed to reduce fuels and minimise bushfire risk on homes in urban areas. This includes all new suburbs in Canberra, as well as built-up areas adjacent to forest and grassland, which are defined as bushfire-prone areas. The same applies to the ACT’s entire rural area.

The ACT Emergency Services Agency (ESA) has revised the zones due to a number of changes in the environment such as forest and grassland woven through Canberra’s urban areas.

Changes have also been made to how bush and urban areas would be managed as large parts of the region recover and regenerate from the 2020 bushfire season. 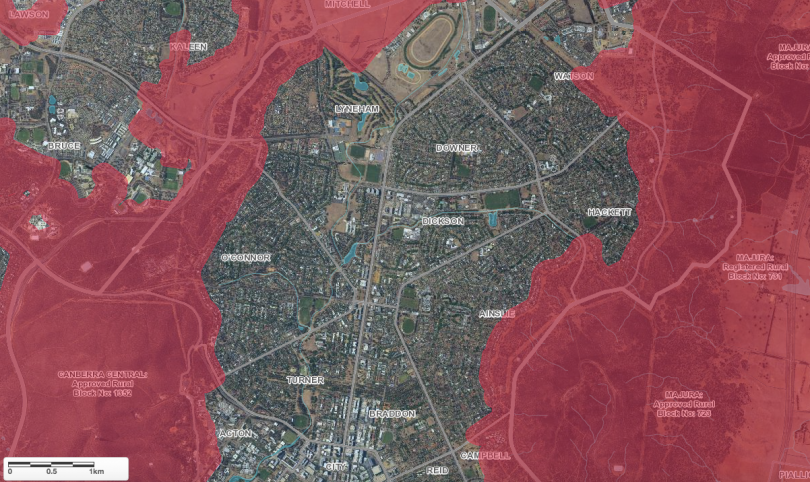 A map showing the bushfire-prone areas (in red) in some of Canberra’s suburbs. Image: Supplied.

ESA Commissioner Georgeina Whelan said the moves were part of a draft plan that supported changes to the bushfire management zones, recently reviewed by the ESA.

“They were identified using the best information we have on vegetation, fuels and location in the landscape.

“The asset protection zones are largely within and around the city providing a defendable space to allow residents and firefighters a degree of safety before, during and after a bushfire.

“The strategic firefighting protection zones help reduce the intensity and spread of fires across large areas of landscape and include easy access points such as fire trails, roads and creeks.”

The draft plan is the 10-year Regional Fire Management Plan and Canberrans are being asked to comment on it before it is finalised.

Executive Branch Manager of the ACT Parks and Conservation Service Daniel Iglesias said the draft plan was an opportunity for the community to provide feedback on the regional fire plan.

“It outlines the different ways the ACT will manage the fuel load in different fire risk zones across our parks, commercial forests and nature reserves,” Mr Iglesias said.

“The plan is based on new modelling technology to keep Canberrans safe from future bushfires while protecting our threatened species and ecological communities.”

Mr Iglesias said bushfire management zones and the Regional Fire Management Plan were crucial for the community and local environmental groups that work across the ACT’s urban reserves, Namadgi National Park and Tidbinbilla. 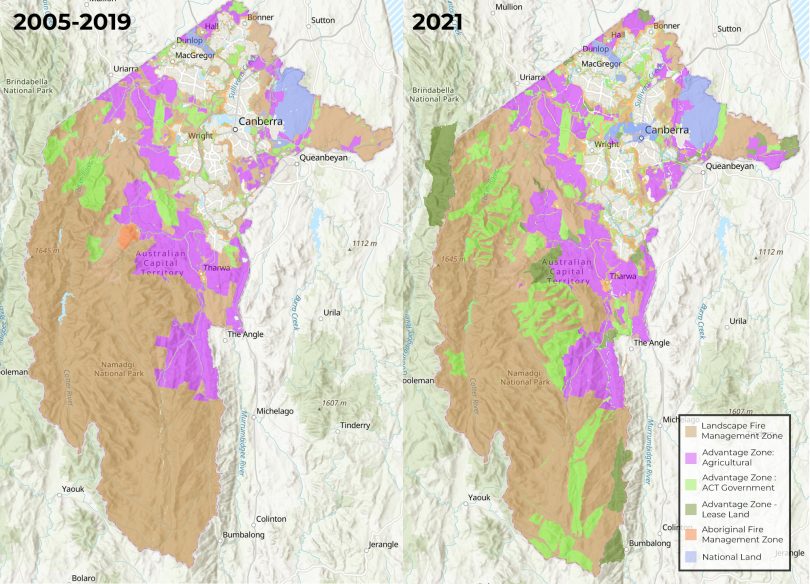 The previous and current bushfire management zone in the ACT. Image: ESA

“The catastrophic 2019–20 bushfire season demonstrated that we must continue to be proactive in mitigating the risk of bushfire impact on life, property and the environment including important cultural assets,” Mr Iglesias said.

Community meetings will be held in the coming weeks on the draft plan and the new fire management zones.

The community can also comment on the plan which includes online mapping resources that show proposed fuel management activities within the new fire management zones, on the ACT Government’s YourSay website until 2 May.

Double standard here as they are not touching the well established pine plantation at the Arboretum which is just as inflammable.

The interactive map on the government webpage showed the ‘Physical Removal’ of pines at Isaacs ridge. Surely they’re not doing that. That pine forest is amazing.

One of the few shady places for a summer walk in Woden.

Double standard here as they are not touching the well established pine plantation at the Arboretum which is just as inflammable.

Patrick Barrett - 29 minutes ago
Dylan your fault View
Sonia Irwin - 5 hours ago
Been watching this as a client. Gotta say a bit nervous is an understatement View
Justin Newbury - 5 hours ago
Whoopsie. View
News 15