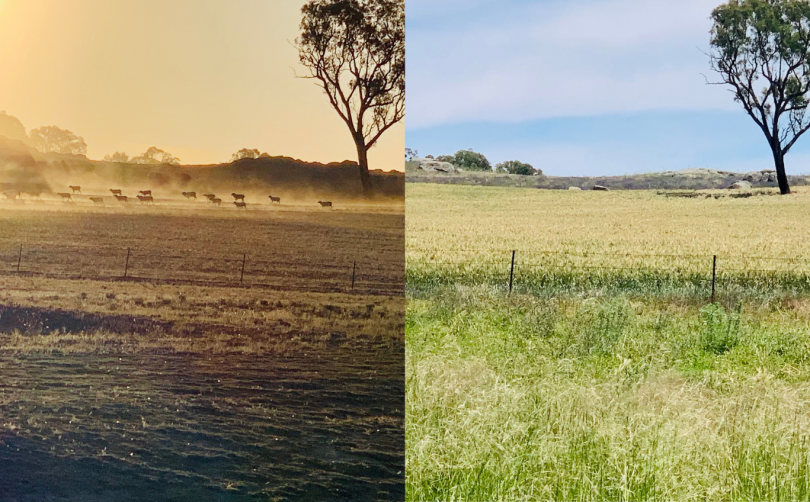 Comparison of a Young property from severe drought and to a green spring in 2020. Photos: Edwina Mason.

Parts of southeast NSW have experienced their wettest October in 26 years, with top rainfalls of 194.1mm in Tumbarumba and 161.6mm at Burrinjuck Dam near Yass.

Tumbarumba was the hardest hit location with 79mm of rain falling on the town during a single weekend, trapping one resident in his ute and flooding the caravan park, sporting oval and surrounding roads.

It was the wettest October on record in Tumbarumba since 2010 when the town’s post office recorded 239.8mm of rainfall. Burrinjuck Dam also recorded its wettest October since 1999 when 174.9mm fell, according to Bureau of Meteorology data.

Bega tripled its monthly average of 50.8mm of rain with a total of 152.4mm in October, while Tumbarumba, Yass and Young doubled their average rainfall, and Goulburn, Cooma and Braidwood came close to double.

It rained for half the month in Young, with the town’s airport recording a total of 98.4mm. However, some farmers near Young recorded more than 120mm in October. The town’s wettest days were on 24 October and 31 October when 20.4mm of rain fell on both days.

Bega recorded an impressive 152.4mm total rainfall for October. Its wettest day was on 24 October when the town recorded 21.4mm.

The wettest period across the region was between 24-29 October when it rained on consecutive days.

Many people could be forgiven for feeling confused about whether to bring out their summer clothes or to keep a few woolly jumpers in the back of their wardrobe as the temperature fluctuated significantly in October.

So where is all this bad weather coming from? La Nina is responsible for the above-average rain the region has been experiencing and we can expect above-average rainfall from now until January, according to the Bureau of Meteorology.

However, the Bureau of Meteorology is predicting daytime and nighttime temperatures to be warmer than average across parts of southeast Australia during spring and early summer.

It’s hard to imagine the bare and brittle paddocks that blanketed the region only months ago during the drought now replaced with luscious green grass that stands feet high and stretches as far as the eye can see.