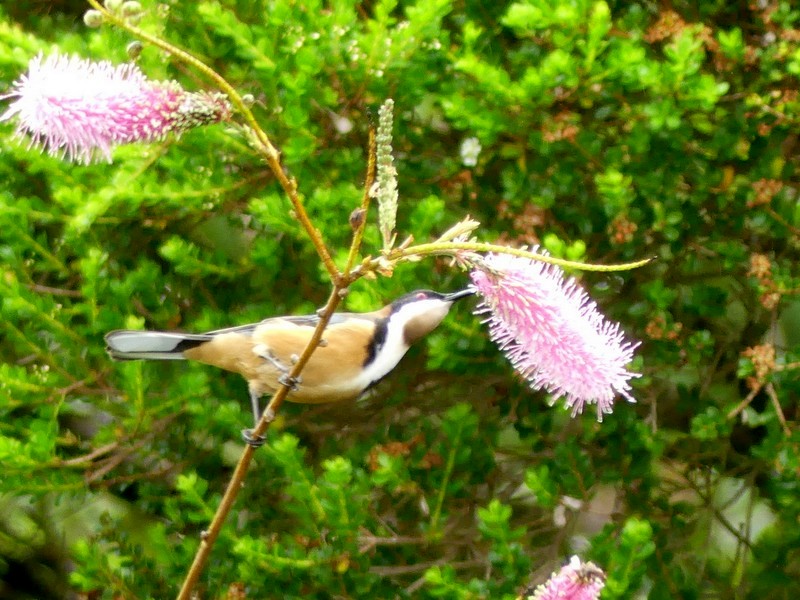 In winter, many bird species very sensibly leave Canberra for the warm north, some going as far as New Guinea. However, this allows us to pay more attention to the ones that stay behind.

Some of these, including Gang-gangs and King Parrots, have spent summer breeding in the Snow Gums in the Brindabella and Tidbinbilla Ranges above Canberra and come down to the relatively milder conditions of Canberra in winter. Among these big conspicuous visitors is a smaller, less obvious one, which regularly visits our gardens.

The Eastern Spinebill is actually a striking little bird, with the longest bill for its size of any honeyeater. It is slender and downcurved for probing into tube-shaped flowers.

Correas, which flower in winter, are very attractive to them, as are eremophilas, Australian desert shrubs which tolerate Canberra frosts very well. Grevilleas are highly prized, too, though they don’t flower so much in winter. Exotic plants which have the right flower shape, such as fuschias, may also attract them.

Spinebills are tan-coloured below with a chestnut neck; males have a black cap, females grey. The overall impression as they flit through and between the bushes is black, white and rusty red. 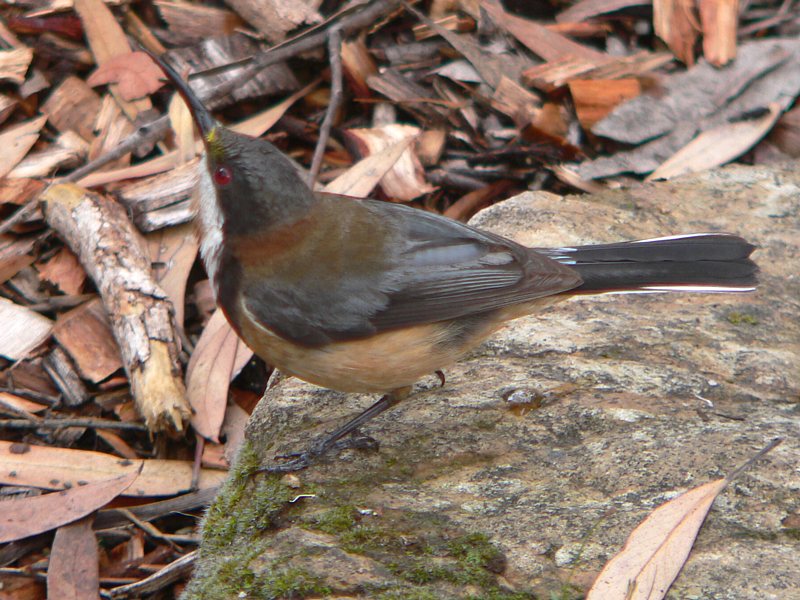 Even if deep in a bush, avoiding the attention of big bullying wattlebirds, the ‘prrrip’ of their wings is surprisingly loud, as is the hard metallic piping song. These are deliberate, aggressive messages to other spinebills along the lines of “this is my bush, go and find your own”.

If the intruder doesn’t take the hint, the occupant hops right up to it and turns side-on, fluffing out its feathers and fanning its tail to look as big and scary as possible.

Inside the bush, they cling to the branch alongside the flower and probe their extendible tongue deep into the flower tube to extract nectar with their highly specialised honeyeater tongue.

This is divided four ways at the tip and has hair-like filaments to draw up the sugar solution by capillary action, like a paintbrush. However, it flicks in and out 10 times a second, far too quickly for our eye to follow. While sipping the nectar, the spinebill collects pollen on its forehead feathers to transfer to another flower.

If the flower is outside the bush, the spinebills adopt a very different strategy that few birds can achieve. They hover for seconds at a time, aligning themselves so that they can insert their bill into the flower.

If I had extreme high-speed vision as a superpower, I could see something remarkable. From side-on, the wings are constantly rotating in flat figure-8s so that they are constantly pushing forwards then backwards to maintain position in the air. At the same time, they are beating downwards, just enough to counter gravity. 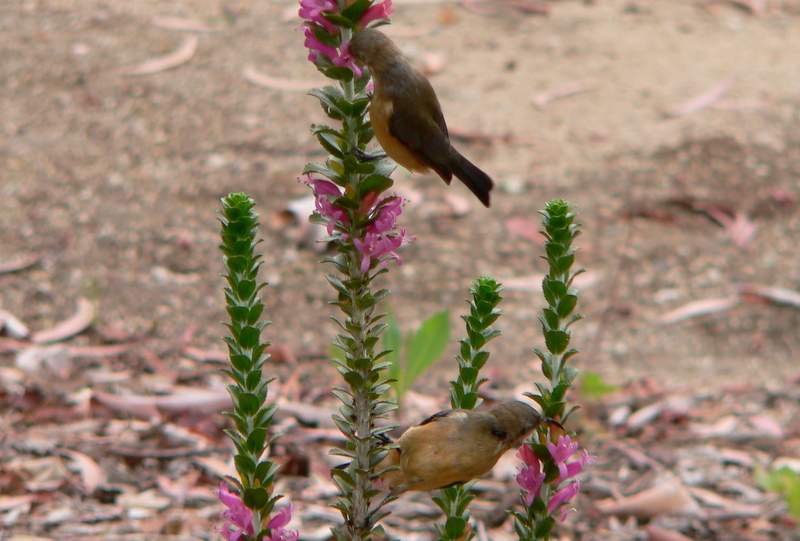 You’ll have to take my word for this – unless you do have that visual superpower that I sadly lack – because it all happens far too fast for us to see. I don’t know that it’s ever been measured here, but the largely South American hummingbirds whirr away at up to 80 beats per second, so it’s likely to be similar for spinebills.

The overall result is to hang in the air while they access the flower with their tongue before moving onto the next one. This requires a huge expenditure of energy, which the nectar provides. Spinebills also have flight muscles that are twice as big as those of other birds of their size. The ultimate practitioners of the art are the hummingbirds, but spinebills aren’t at all bad at it.

If you’re not in a position to have a garden to host your own spinebills, the wonderful National Botanic Gardens has a very healthy population all year round (with a resource like that, why would you leave for the mountains in spring?) and it won’t take you long to find a spinebill. They’re worth the search.

Saw one in the garden doing a hummingbird last week, hovering while sipping from a grevillea.

What a coincidence, I saw many of these beautiful birds today in the bush while walking and was wondering what they are!

We have them in our garden often in Gordon .beautiful whistle

My hubby snapped this in our garden!

Thanks Sally! I enjoyed both the video and your sound track. And great photo from your hubby too!

I have these birdies visit my garden all the time. I love them!

Dan Adams - 15 minutes ago
Sign and share the petition to return the limits back to 60km. https://chng.it/chvTLkD8bc View
News 198

Dan Adams - 17 minutes ago
Sign and share the petition to return the limits back to 60km. https://chng.it/chvTLkD8bc View
Business 14

Simon Mitchell - 23 minutes ago
Grace Hayes let alone waiting for 2 weeks to apply and wait 30 days to get paid… View
Nik Kiermaier - 5 hours ago
Grace Hayes and Bar Bar still gets paid what a joke View
Tramcar Trev - 6 hours ago
I like the idea that a business should be allowed to open with fully vaxxed staff serving only fully vaxxed customers... I'm... View
Community 23

Simon Trommestad - 3 hours ago
Marc Edwards, you can believe that. They could just as easily be killed by a staf or other bacterial infection. They could be... View
Rastislav Zrelak - 4 hours ago
We or politicians need to admit that Covid will be here with lockdowns or without them and same with vaccine, our immune syst... View
Callum Bowen - 6 hours ago
That’s actually a really good point. People do die all the time and there’s nothing worse than pesky safety requirements... View
News 61

Clare Thomas - 4 hours ago
What about accessibility for greater inclusion for everyone? View
show more show less
*Results are based on activity within last 7 days

UPDATED 3:00 pm: Year 12 students have been given the green light to return to school at the start of Term...
Breaking 0

@The_RiotACT @The_RiotACT
The ACT Government will plant around 30 crepe myrtle trees in Bonner following feedback from Gungahlin residents about how to improve the median strip along Mabo Boulevard https://t.co/S5z6tEs5Gh (2 hours ago)

@The_RiotACT @The_RiotACT
The NRL finals series is well underway, but the Canberra Raiders aren't involved thanks to their season of woe. Gavin Dennett runs the ruler over where the 2021 campaign went wrong https://t.co/00ZpfLULI6 (3 hours ago)