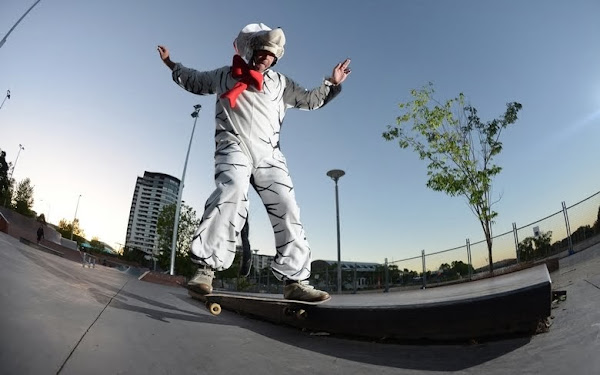 Just heard about this StakeMyRep site where Canberran skaters compete to make cooler skating videos than each other.

This sounds kinda fun, hopefully they get some great footage out of it.

So this project involves, skateboards, YouTube, and social media? Prepare to get grumpy and not understand what’s going on old people!

StakeMyRep.com, the unique new social website where friends motivate each other to achieve goals, is teaming up with Trilogy Skateboards to give away a complete skateboard worth over $300.

StakeMyRep founder Thomas Burdon explains the Canberra skateboard shop has set the first ever “sponsored challenge” by offering the prize to the skateboarder with the winning combination of style, creativity and skill.

“It’s exciting for us because this is the first partnership like this we’ve done,” says Thomas. “We’re still defining our business model, and Trilogy have backed us from day one so it was natural that we would work with them to launch this competition.”

“In StakeMyRep, users create challenges for themselves, and are accountable to the community through a system of reputation points. It’s about finding alternative and fun support models. Essentially you’re crowd sourcing motivation.”

Earlier in the year, StakeMyRep secured seed funding through Canberra start-up incubator Covate, who have helped mentor the team through this process.

“StakeMyRep is about users pushing themselves, and so is the competition, but it also gives the guys from Trilogy another way of staying in touch with people who like the same things they do – rad skateboard tricks,” says Thomas.

To win the prize, users just need to accept the challenge at alpha.stakemyrep.com, then go and land their favourite trick and upload the video evidence somewhere like Youtube.

After this, they paste the link into alpha.stakemyrep.com so the challenger and everyone else in the StakeMyRep community can check it out. Trilogy will pick a winner based on a combination of style, creativity and difficulty.

“Thomas has lots of cool ideas. We use social media to get our products out there already, and we don’t mind supporting a local company with big plans,” says Dave.

The StakeMyRep team is growing, consisting of 5 people with a range of technical and business skills.

The competition is open to Australian residents and closes 12 December. To enter head to stakemyrep.com.

JC - 24 minutes ago
China may well be a developing country with many that are very poor. It does however have a massive (millions) middle to uppe... View
keek - 3 hours ago
Nobody held a gun to the Chancellors head and said "You must rely on income from foreign students and expand to a level where... View
chewy14 - 5 hours ago
JS9, Whilst I would agree that the Federal government has set the framework and playing field that the Unis are operating in,... View
News 20

Richard Windsor - 2 hours ago
As the poor bunny who has been identifying mushrooms, both toxic and non-toxic for the ACT Hospital system since 1985 I must... View
Community 12

Capital Retro - 7 hours ago
".... An emblem showcasing medieval queens, crowns, and castles, doesn’t represent 21st century Canberra..." We have all th... View
Stephen Saunders - 12 hours ago
Symbols do matter. The British monarch is the white hereditary chief of the Church of England. An emblem showcasing medieval... View
HiddenDragon - 22 hours ago
"Could the Brindabella Ranges be incorporated into the ACT’s coat of arms,..." An image which combined the mountains and th... View
News 1

jwinston - 9 hours ago
How many committees and inquiries does there have to be before anything constructive is done at the AMC? From what has been p... View
News 71

Capital Retro - 23 hours ago
I've already pointed out the folly of people building in the forests which are known bushfire areas. It seems some academics... View
Community 1

Police have confirmed that a 34-year-old who died in a Page house on Saturday was stabbed to death, and a...
News 15

The CFMEU has been accused of attempting to control the price charged by Canberra steelfixers and scaffolders, allegedly telling businesses if...
News 11

RiotACT and About Regional readers have woken this morning to depopulated Facebook feeds as the social media giant makes good...

@The_RiotACT @The_RiotACT
BREAKING: Wajid Kakar, a 35-year-old Afghan national, has been charged with murder over the death of 34-year-old Michael Williams, as well as the attempted murder of two other people in Page on Saturday https://t.co/LClTY2bZoj (1 hour ago)

@The_RiotACT @The_RiotACT
ACT Policing is looking to identify a cyclist who was on Braine Street in Page on Saturday, 20 February, at around the time of an incident that resulted in the death of a 34-year-old man https://t.co/nHxtnPH1tw (3 hours ago)