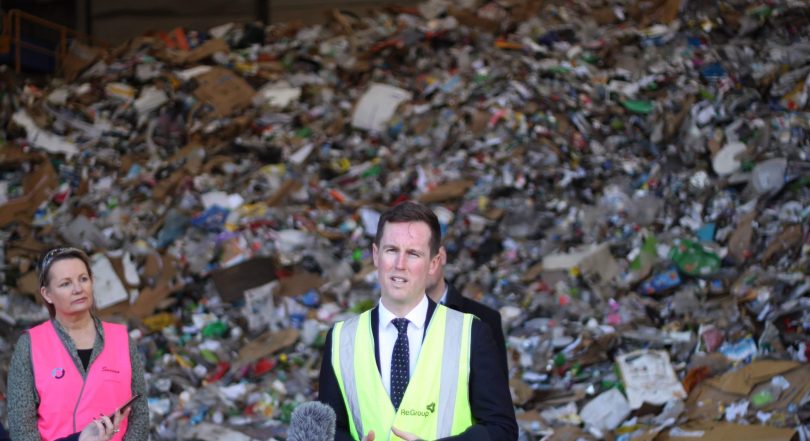 Minister for Recycling and Waste Reduction Chris Steel says Labor does not support the CRS proposal in Fyshwick. Photo: File.

ACT Labor’s shock announcement that it will not support the proposal for a household garbage processing and recycling plant in Fyshwick has blindsided the proponents and cast a shadow over other waste plans for the evolving suburb.

Minister for Recycling and Waste Reduction Chris Steel said the Capital Recycling Solutions proposal for its Ipswich Street site had raised a number of red flags and now that the Environmental Impact Study process had been concluded he believed Labor’s position should be made clear before a development application was lodged and the government goes into caretaker mode at the end of the week.

But CRS director Adam Perry said the DA had already been lodged a week ago, although it is not yet available for public comment.

He said CRS did not see this coming and was considering its position. He would have more to say when the situation is properly assessed.

CRS, a joint venture between Mr Perry’s Access Recycling and Sydney-based Benedict Industries, has spent millions getting to the DA stage and the government could potentially face a compensation claim.

It appears the proposal has run into the election campaign, with fierce lobbying against it from the inner south community groups and Fyshwick traders, and the Greens already calling for a moratorium on waste proposals until there was a clear framework and a planning review of the suburb.

A sceptical Inner South Canberra Community Council chair Marea Fatseas said the council wanted a comprehensive policy statement from Labor and the other parties, as the Greens had supplied, about all the waste proposals in Fyshwick and the future of the suburb.

She said allowing an increasingly industrial Fyshwick next to a new residential area in East Lake was not acceptable and the council wanted the Territory Plan to ban such big waste processing plants in Fyshwick.

He said Mr Steel had not provided any concrete policy or process for actually halting the CRS proposal.

Before coming out against the CRS proposal, Mr Steel had written to Planning Minister Mick Gentleman listing his concerns, and government waste manager and recycler NoWaste had also written to Chief Planner Ben Ponton raising concerns.

Mr Steel had questioned the proposal’s effectiveness and economic viability, and whether it clashed with ACT policies related to climate change or resource recovery from household waste including Food and Garden Organics, for which government has its own plans.

He was concerned about stockpiling on the site, waste coming from across the border and that it could undermine the system of waste levies in the ACT and in NSW.

Mr Steel said it also may be inconsistent with the proximity principle, where waste should be dealt with as close to the source generation as possible.

There were also doubts about the low level of resource recovery (20 per cent) and whether there were markets for this material in the current environment.

Mr Steel said the proposal was based on sourcing household garbage which the government had never agreed to provide.

”There was a lot of concern that we [the government] were supporting the proposal because they had suggested that we were going to provide them with that waste stream which was something we had never offered up or was planning to do,” he said.

He said Labor would not rely on the planning officials to reject the proposal but look at a range of different ways to ensure it was not supported, including not providing a waste stream.

Mr Steel also said he had concerns about the massive Hi-Quality commercial and building waste processing plant proposed for Tennant Street, particularly due to its traffic and environmental impacts.

He questioned whether it was needed or if Fyshwick was even the right location for such a facility, saying the current waste strategy clearly stated that MRFs should be co-located in the more industrial area of Hume.

”That’s something we need to consider more broadly with this other proposal,” he said. ”It’s a large site but also a type of recycling that is done already in the ACT [according to NoWaste].

Hi Quality’s draft EIS is still being assessed by the Environment, Planning and Sustainable Development Directorate.

Seems like they were happy to string along the proponent and let them waste their money until the timing was right for a pre-election announcement.
Maybe they can also erect a nice ratepayer-funded purple coloured sign at the site announcing their decision?

I dont understand why anyone thought this would be a good idea and accepted in Fyshwick.

Sounds a bit like Labor isn’t polling so well in its former heartlands of Narrabundah and Kingston.

This should only be a surprise to anyone who thinks that planning processes in this town are anything more than just window dressing.

I see what you did with the headline.

This is good news. It was never going to be a outcome there.

This proposal was always about transferring garbage from ACT, Sydney and Melbourne to landfills. A 20% recycling rate is laughable for a “recycling” facility. They do not have any assigned waste to handle from the owners of the waste (governments) so it seems. Take a look at the “San Diego San Marcos recycling plant” to see a logical outcome from building a plant without secured waste supplies. Plant closed down shortly after opening up and losses that almost bankrupted the government

Wow – you have an opportunity to invite vendors into the city who will introduce facilities that potentially innovate recycling processes, improve and increase processing capabilities, genuinely lead the way in making sure waste generated locally is managed responsibly and locally, supporting local jobs and reducing pollution associated with “outsourcing” recycling to other cities or countries.

New recycling facilities are not “tips”.

They should celebrated, funded and continuously encouraged to improve and innovate.
Lead the way for minimising landfill, increasing recycling capabilities, and reducing illegal dumping.

Sounds great, bring it on.

Simon Wheaton chucking rubbish into containers and dumping it in nsw, is exactly what a waste tranfer centre is

Simon Wheaton so your telling me no rubbish trains will be leaving Canberra, bound for woodlawn?

The community has been expressing their concern over this for at least 6 months and now 5 weeks before the election we suddenly hear from the Government. I’d have to question their credibility and their follow-through on this.

There’s no votes for them in it, simple

are you saying the Mitchell tip is even closer to houses and should be closed? This isn’t a tip, it’s a recycling plant not intended for long term storage (otherwise it would be a tip)

Fyshwick is evolving, and it’s no longer only a light industrial area on the edge of the city, as it was. It has become an inner city location. Cafes, etc have moved in. Homes are planned nearby. It will continue to evolve, as suits its location, and that isn’t industrial.

Morgan Hitchcock yes but not a asbestos or household garbage dump.

I like Hume, as an option as there is land available to ensure good traffic flow and containment to site. Recycling is what we need, to conserve the beauty of the countryside of Australia as a whole. Building waste is another area we need to invest heavily inn, especially buildings don’t last anymore, 30-40years at the most with alterations made in the meanwhile. Glass, wood metal, bricks, all recycable, reusable. Yet this is all going into landfill. We need to think smarter. Existing Cement can be crushed and used in compact foundations.

Once again it seems the government and the Greens have no idea what they are doing.

If they didn’t want these types of facilities in these locations, they should have clearly signalled to industry that they weren’t acceptable and then actively pursued changes in the land use that prevented them.

They can’t now try to retrospectively oppose such facilities at this late stage because there is an election in a month. The ridiculous attempts to politicize this type of planning decision is reprehensible.