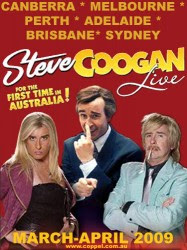 The comedy news blog “gagging for it” brings news that Steve Coogan is coming to Canberra to play the Canberra Theatre.

A decade ago Coogan was very funny. But since then he’s done very little other than appear in a string of minor Hollywood roles and star in a few B-list lemons.

And we’re talking about a man who hoovers so much cocaine and heroin that he appalls Courtney Love.

It could be sheer genius, it could be a complete train wreck. Just don’t say you weren’t warned.

Heck I might go along just to see the train wreck.

Head scratching here; I’ve just got tickets for Coogan, released a fortnight before the show. For Xmas, as one of her presents, I gave my daughter a ticket for Dylan Moran for his April show, bought 4 months in advance?

WTF gives there then?

Well I succumbed, I’ll go see him again, just got tickets. I hope her indoors and the kids enjoy him. They’ve seen his “Alan Partridge” stuff, but not a lot else.

I must get the Saxondale series on DVD.

The best stuff Coogan ever did was the; “Knowing Me, Knowing You” radio series for Radio four. The CD’s are a great hot if you have a long car journey.

… as producer a whole stack of very other funny TV Series with his Baby Cow production company.

He is beind Baby Cow? Interesting. I was just going through my collection of the Mighty Boosh the other night.

Off the specific topic of Steven Coogan (bear with me), but there was a nice set of graphs t’other day showing prices of ACT Heroin vs other national price trends.

We tend to follow an average of Victorian (low) & NSW (middlingly-high) prices, but closer to Victorian than NSW, but our average amount of heroin & other intravenous drugs consumed per user are amongst the highest in the country.

Its almost like he’s here for a bender instead of work. 😐

He’s done a lot in the last decade since he stopped meeting your obviously very high standards, Johnboy. All of the above plus, as producer a whole stack of very other funny TV Series with his Baby Cow production company.

Not my standards, the ones he set earlier in his career. Before trying to get into the gossip mags became his priority.

He’s done a lot in the last decade since he stopped meeting your obviously very high standards, Johnboy. All of the above plus, as producer a whole stack of very other funny TV Series with his Baby Cow production company.

Tristram Shandy was worth watching, but watching him live on stage…?

I’ve seen him live, several times, back in Blighty, it’s a good show. (Though some knowledge of his characters and their foibles is necessary to get the full joke.)

He still does some good TV. Saxondale was pissfunny.

Eric Staal - 1 hour ago
Jake Badger change is scary and bad View
Kylie Beer - 6 hours ago
Ian Hubbard Ian, I know you know that the YWCA does a lot more than childcare. The current buildings on the site haven’t be... View
Joan James - 7 hours ago
Rob Parker my thoughts too! View
News 51

Christopher Goyne - 6 hours ago
great news View
Anthony Briscoe - 11 hours ago
Will the Liberals ever learn. Time to leave the Territory I feel View
Oliver Raymond - 14 hours ago
On a scale of A to Z, guess where Zed comes? View
Property 156

William Coats - 11 hours ago
I hope lots of businesses get involved. I hope it is really easy for them to take part. I assume all the small business knowl... View
Opinion 26

William Coats - 11 hours ago
Lee McDowall and he personally probably wont face the people again. It is good of the union not to strike until the week afte... View
William Coats - 11 hours ago
Nathan, The ACT is run as a union town, unless we complain nothing will be done. "fix my street" is the perfect example, why... View
chewy14 - 16 hours ago
The whole point is that developers have worn the costs of their proposals based on the current land use and policies in place... View
News 52