Foxsports has the thrilling news that SuperCoach Furner’s big boys have blitzed their way into a home semi final after their unconvincing start to the season:

Canberra will wipe the slate clean after storming to a 42-22 come-from-behind victory over the hapless Warriors and snatching home advantage in the first week of the NRL play-offs.

The Raiders’ victory in Auckland on Sunday, when they turned around a 22-6 half-time deficit to rack up 36 second-half points, means they will host Cronulla in an elimination final next weekend.

Having languished near the foot of the table earlier in the season, Canberra have now strung together five wins in a row for huge momentum heading into the post-season.

So really it’s time for this: 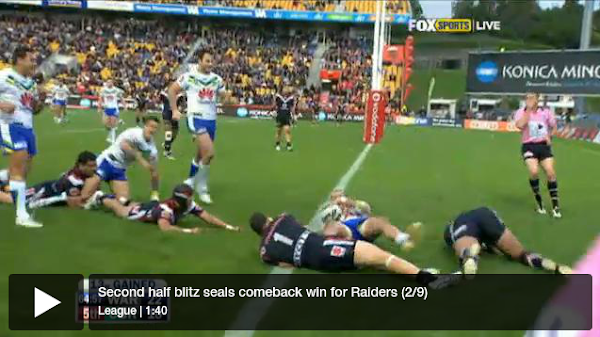 I’ve previously talked about the fickle nature of the Canberra crowds for all sports. It’s demonstrated here on The Riot Act, and in particular for Raiders supporters.

The Raiders lose a game or two, and you’re almost guaranteed that the supporters come out and bay for the blood of Furner, the board, just about everyone except the players.

The Raiders win five in a row, cement a home final against a team they beat 36-4 less than two months ago, and a solitary Raiders fan posts on here.

I think some of the supporters need to stand in front of a mirror for an hour or two, and stare intently.

At the Raiders vs Sharks game at Bruce earlier in the year I was appalled at the Raiders fans leaving 5 minutes after half time. The Raiders were still in with a chance, but the fans didn’t want a bar of it.

…so is Brett white…

He’s massively overrated anyways. Whitey only made it to the Storm because of his coaching contacts, and they only wanted him if they were rorting. He never made any winning contributions to Origin, and his performance at Canberra has shown his true value for money.

It will be an interesting contest as both teams have beaten each other away. Hopefully the Sharkies can chalk up another win in Canberra!

I’ve previously talked about the fickle nature of the Canberra crowds for all sports. It’s demonstrated here on The Riot Act, and in particular for Raiders supporters.

The Raiders lose a game or two, and you’re almost guaranteed that the supporters come out and bay for the blood of Furner, the board, just about everyone except the players.

The Raiders win five in a row, cement a home final against a team they beat 36-4 less than two months ago, and a solitary Raiders fan posts on here.

I think some of the supporters need to stand in front of a mirror for an hour or two, and stare intently.

I certainly thought Furner should have been axed if things kept going. eg if we finished down the bottom, fighting off the Roosters, Panthers and Eels. However Furner has shown and perhaps the players tas well, that they can play to their potential.

The Raiders do have a record of making the finals and then playing crap the next year. I give them credit for the fact it would have been easy to say Campese is injured, so is Brett white, we can’t be expected to do as well this year. The real test will be backing it up and making the finals next year and playing a lot more consistently.

I’m guessing the tongue-in-cheek use of the words ‘thrilling’, ‘stirring’ and ‘supercoach’ mean you’re not really ‘thrilled’? Hahaha! Sounds like you didn’t watch it yourself either?

It is kind of funny to re-read a few “Monday’s expert” blasts from posters only a month or two back:
http://the-riotact.com/if-the-winning-percentage-of-a-football-team-has-got-absolutely-no-correlation-with-the-ability-of-a-coach-why-have-one/75010

Hmmm, perhaps we could say that all the negative comments spurred them on to play/coach better?

I wonder if people will all-of-a-sudden watch, or go out to, the next finals game?? Regardless of how much further they go, I think we could probably say now that they have done pretty well this season (that last half especially). Feel free to credit/blame whoever you want for that…. Now, if only they could start the season that well, they’d be minor premiers! 🙂

Surely it’s time for all the Furners to be given the boot.

I mean how many chances can these fools get?

Futureproof - 3 hours ago
chewy14 - I'm a boomer, still working. When I retire, I'm going to hit up the government to get as much free stuff as I can.... View
Capital Retro - 6 hours ago
I referred specifically to that demographic who were self-funded. I suppose it doesn't matter anyhow because you hate them al... View
Mataina Rozowsky - 20 hours ago
Of course they're rising .... Canberra's are on the move again View
Community 1

ChrisinTurner - 4 hours ago
The fencing is needed to protect children from cars that are travelling too fast for urban areas. Join Safe Steets to School... View
Community 1

Peter Graves - 6 hours ago
The most beautiful obituary and "in memoriam" I have everread. Quite brought Ms Whittaker back to life.... View
News 1

Brindie - 6 hours ago
Well done to the Minister for this initiative. Now that has been set in place, could she please put her focus on issues relat... View
Lifestyle 1

Lucy Green - 9 hours ago
I have lived in the area for a long time. These birds are definitely breeding and spreading. What started as the Narrabundah... View
David Worboys - 18 hours ago
As new comers to the suburb it was great to see these birds at first. But after seeing the number of near misses with car acc... View
George Jenson - 21 hours ago
With all due respect I agree. They are feral animals. I have seen the skinks in our front yard disappear. What about the enda... View
News 5

gooterz - 17 hours ago
The anti VAx community would have a field day with the at your own risk nonsense.. The park should be fit for purpose. It eit... View
Dallas Stow - 23 hours ago
I'm guessing that injuries have occurred to only a very small minority of users. Why close them off to all if some vetty few... View
ChrisinTurner - 1 day ago
Children need to be taught tat living in Canberra is dangerous, in particular the 50 km/hr speed allowed in residential stree... View
News 51

Rade Kosa - 19 hours ago
Marc Edwards how many boosters will it take to just admit it’s not working. Anyway good luck guys. View
Marc Edwards - 20 hours ago
Rade Kosa you obviously don’t understand the paradox of vaccination, because if you did you would realize even that graph s... View
Jo Hann - 1 day ago
Rade Kosa oh dear. "Big pharma" profits far more from the unvaxxed via expensive treatments. The need for boosters is common... View
News 8

A_Cog - 21 hours ago
That’s completely untrue. Pertussis vaccinations are given to parents and close relatives to prevent the baby catching whoo... View
News 9

An accused drug trafficker allegedly caught with meth and thousands of dollars in cash was apparently seen trying to eat...
*Results are based on activity within last 7 days

@the_riotact @The_RiotACT
A move to the #country is a dream for many #Aussies, and for one multigenerational family who established a microflower #farm at Yass River, their only regret is not having done it sooner https://t.co/2TPkKpJ8NG (20 minutes ago)

@the_riotact @The_RiotACT
A petition is urging the #ACT Government to eliminate the barrier to many families wanting to spend time #outdoors by constructing fences around public #playgrounds https://t.co/CfAdi0HAG1 (2 hours ago)

@the_riotact @The_RiotACT
"Love of the job" is the key to #tennis coaching according to @TennisCanberra's Club Coach of the Year Robert Jamieson https://t.co/pG4Z1vLqxP (3 hours ago)