Strange scenes on Garema Place to promote the Multicultural Festival 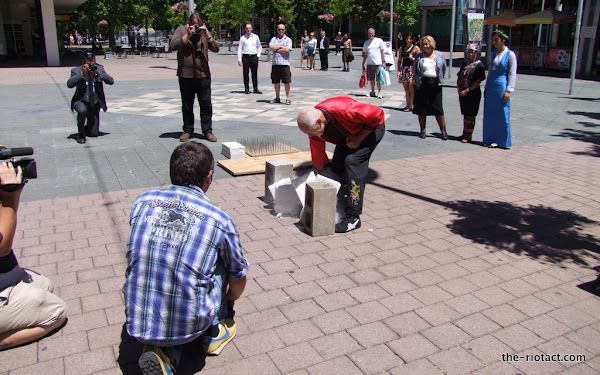 Yesterday I got a media alert in and it was one of those things that just couldn’t be resisted.

Canberra Kung fu grandmaster Neal Hardy will tomorrow (Tuesday) give media a preview of his world record attempt at next month’s National Multicultural Festival (10-12 February), which will see him lie on a bed of nails with more than 500kg of bricks placed on his torso, and then have the bricks smashed with a sledge hammer.

As a preview of his resilience, Master Hardy will tomorrow lie on a bed of nails and have people stand on him during the demonstration. He will attempt to break his own world record on Sunday 12 February as part of the Festival celebrations.

And so, at 2pm by the merry go round the media reptiles assembled with suitably photogenic ethnic folk and a crowd of bored kids slowly gathered wondering loudly what was going to happen. 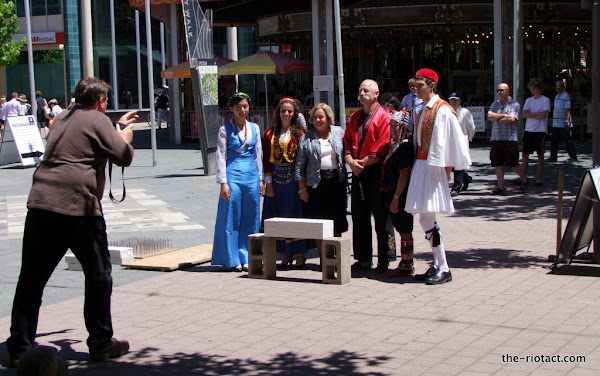 With summer returned no one wanted to stand out in the sun, so clusters formed in the shade.

The WIN camera crew was running late and who is going to waste a concrete block to not have it on the evening news? We waited.

The news crew arrived, interviews were conducted away from the crowd and as you can see above Master Hardy duly dispatched the concrete blocks.

There then followed the slightly unedifying spectacle of the Minister for Multicultural Affairs climbing onto a man laying on a bed of nails.

No really, I’m not making it up: 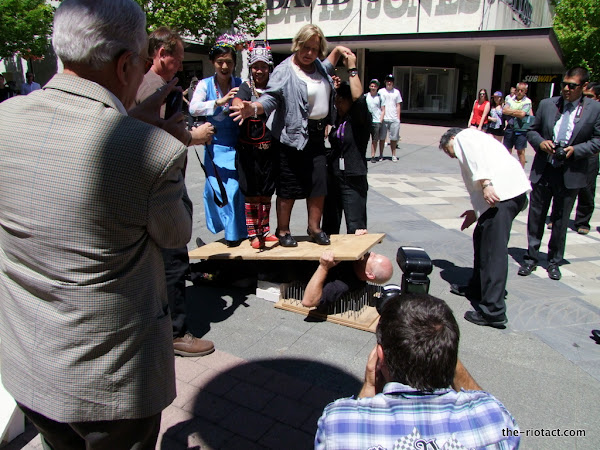 For more exciting scenes in the City be sure to check out the Multicultural Festival when it kicks off 10-12 February.

They’re not the plinths that the famous poets were on, are they?

This is simply way cool.

Will be there (for the real thing) with bells on.

Sarah Grainger - 12 minutes ago
Recognise anyone? Jessica Kylie Dee Thomson View
Claudia Elward - 38 minutes ago
These are some of the hardest working people I know. Get behind them, they are honest people who help anyone. View
David Elward - 3 hours ago
Good people, a hard working family. Claudia Elward View
Sport 32

Jessica Beitzel - 2 hours ago
RIP my dear friend, your great inventions will be greatly miss by all. View
Sair Rah - 2 hours ago
A lovely guy who pursued his dream and helped so many others realise their’s. He was quite the show stopper at Beer Day Out... View
Vanessa Friedman - 2 hours ago
Our thoughts are with Ed & Leon during this sad time. John your magic & creativity will be a treasured part of Canberra’s f... View
Food & Wine 4

sebastiancampbell - 2 hours ago
I think that the traditional atmosphere and service in Danny’s is fantastic. It is something that is sadly lacking in the f... View
Katie Humphrys - 4 hours ago
You sound nice. Drop in and introduce yourself one day! If it was as bad as you describe funny how it’s still going; must b... View
News 6

Coastal commuters will be among the first people to cross the new Batemans Bay Bridge over Clyde River from late...
Lifestyle 26

Updated 11:00 am, 1 March: A motorcyclist has died at the scene of a collision with a truck and a utility...
Courts & Crime 2

A Canberra father accused of repeatedly beating his wife and choking their daughter will be released from custody after he...
Community 8