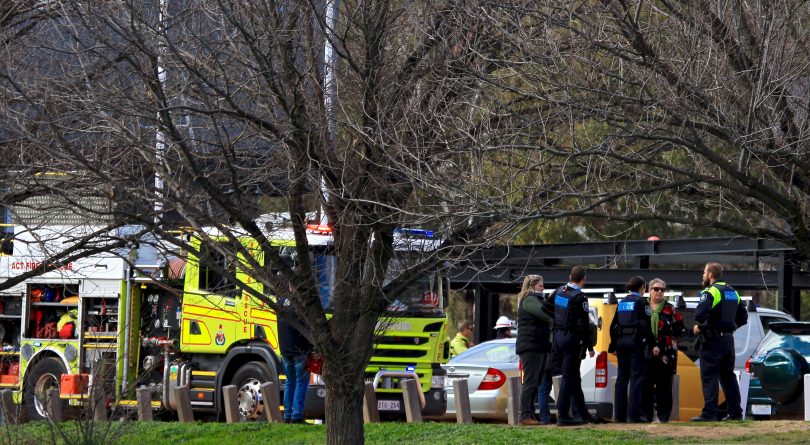 ACT Fire and Rescue crews and police on the scene of a structure fire at Garran Primary School. Photo: Michael Weaver.

A structure fire at Garran Primary School has forced the evacuation of about 20 children and their carers today (16 July).

The first reports of the fire were received just after midday and firefighters from ACT Fire and Rescue attended at the school in Gilmore Crescent at about 12:30 pm.

Children who were attending a school holiday education program at the school were safely evacuated to a nearby zone next to the Garran Oval, adjacent to the COVID-19 testing centre.

Three pumpers, a Hazmat unit and a breathing apparatus unit were in attendance with officers from ACT Policing, who kept concerned staff from the school informed.

No smoke or flames were visible and it is understood the fire began in the bathroom area of the school and has been contained.

No injuries have been reported.

The community is advised to avoid the area.

Rob Long - 15 minutes ago
The Nelson legacy, the liberal wrecking of the AWM. He systematically wrecked the joint. View
Timothy Bailey - 6 hours ago
The AWM and "ANZAC" are very powerful icons. Difficult to argue with or question. The whole 'Beersheba - last great cavalry c... View
BlowMeDown - 11 hours ago
I think you've just summarised the Labor/Greens strategy re promoting light rail by derailing, as they did, the bus system in... View
Community 30

retep - 33 minutes ago
Applause. Thanks for your efforts. We too try to alleviate our energy use in similar ways. Also agree with your observations... View
HiddenDragon - 2 hours ago
Canberrans (particularly those without the income of a professor or an MLA) who are still absorbing the recent news about a b... View
jwinston - 3 hours ago
Jeez Chewy - I never picked you as a Tim Flannery fan boy? View
News 3

Paul Leins - 53 minutes ago
Chinmoy Misra so you're saying *you* can't maintain a reasonable speed in built up areas without some kind of ridiculous urba... View
Jeff Shapiro - 1 hour ago
Ken Owers you need an idrive adapter or buy a Mercedes View
Chinmoy Misra - 1 hour ago
Paul Leins Congratulations. You missed the point entirely.... View
Business 63

@The_RiotACT @The_RiotACT
Gungahlin is often seen as the new part of Canberra, but some locals have lived their whole lives there. The town centre is already big and it's still growing https://t.co/Kqq2xR1Mmm (49 minutes ago)