Summer sounds concert series at the Botanic Gardens. A review 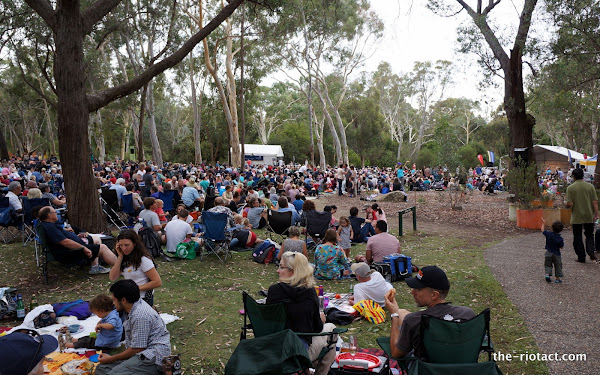 A few weeks ago Goosepig decided she wanted to go on a picnic.

Somehow she had reached the point of being a grown woman without ever having been on a picnic.

A rather grand picnic set had been procured, strong views were held as to what a picnic should entail, but there was no actual picnic experience.

You can imagine how this was a source of some dread for your correspondent.

Things were not improved for me when she got together with my mother to decide the first picnic should be a whole of family outing.

It was decided there would be a picnic. It was then delegated to me to find a suitable spot to picnic at.

(I can feel the male readers in the audience crossing their legs defensively at this point.)

And then it came to me!

A facebook invitation to see The Cashews play at the Botanic Gardens on Saturday evening!

(To those who question the value of social media I say this one single piece of help balances out all the evils laid at its door.)

It was agreed that my suggestion was suitable.

Fortunately planning is a strength of mine and, having worked it all out, the right dogs were left at the right houses and all the people were in my car with all the food and drink at 4.30pm in Lyneham heading towards the Botanic Gardens.

“But the concert does not start until 5.30pm and Lyneham is very close to the Botanic Gardens” I hear you cry.

This is a tip for those considering this sort of activity. An awful lot of people turn up to these concerts. Get there early.

When making a picnic of it getting there early has added benefits.

You can not only get a good spot, but you will not unduly annoy those sitting behind you while you sort out the food and drinks.

Sitting on the eucalypt lawn eating chicken drinking white wine spritzers on a summer evening is no hardship.

The crowd of those with less excellent planning skills filled in behind us until there was quite the throng in attendance, squishing down on the kangaroo poo which adorns the lawn (hurrah for picnic blankets!).

At 5.30 their was a long rambling introduction which the sound tech thankfully left at an inaudible level before The Cashews were introduced as “Chair/No Chair”, a mistaken reference to the sign directing the seating arrangements at the front of the stage.

Kids got up and danced, families enjoyed the free entertainment. Wine and beer was quietly knocked down, the queue for the ladies toilets became a maelstrom of small children and desperation. 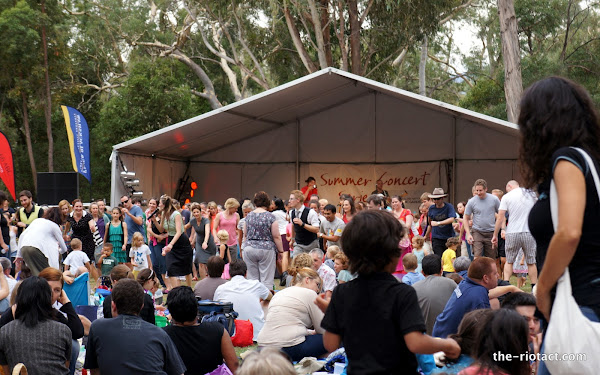 During the interval there was a swing dancing demonstration which got a surprising number of people up out of the audience and dancing.

Come 7.30 it was all over and the audience was very politely asked to get the hell out with the Gardens closing at 8.

Here’s some video I shot which nicely sums up the vibe of the thing:

If you haven’t been but think this sounds like your thing there’s a page on the Botanic Garden’s website.

It’s a uniquely Canberra way to spend an evening.

Justin Watson - 3 hours ago
It looks like the park and ride is near the existing stop to the north of Mitchell and the new stop should be going near Sand... View
Opinion 6

Dave Ryan - 3 hours ago
Steve Ross because we're not allowed to have opinions about this? Or because we're not allowed to ask questions about it? Int... View
Matthew Soall - 5 hours ago
Rob Thomas That they did, no one should be above the law, NO ONE. It's time that all Aussies get on board with that notion. View
Steve Ross - 6 hours ago
Reading this reminded me of Dirty Harry’s quote about opinions. 🤨 View
Property 11

Adrian Evans - 4 hours ago
All the best GT. Look forward to more day at the cricket together View
Phil Small - 22 hours ago
One of the best and nicest guys ever.....cheering you on GT. View
Marcia Bowden - 1 day ago
Glen, sending positive thoughts x... View
Community 44

Valerie Foster - 10 hours ago
Too many speed changes in too many areas. It is revenue raising. View
HiddenDragon - 21 hours ago
An overly literal (or, perhaps selectively so) approach to the application of the criteria for different speed zones might ha... View
David Brown - 23 hours ago
Clinton Berry I don’t know of any accidents in the last decade. View
Lifestyle 1

Kathy Schneider - 22 hours ago
One of the highlights of the year! View
News 12

It's a hoarder's dream and a librarian's nightmare. Thousands upon thousands of books in boxes that either need to be...
Opinion 20

It's taken 166 concrete bridge segments, but the last one was finally placed on the new Batemans Bay Bridge on...
News 56

Negotiations over pay and conditions which could avert strike action are continuing between garbage collection company Suez and the drivers'...
Breaking 0

A 16-year-old charged with murdering an 18-year-old at a Weston skate park in the early hours of 27 September has...

As summer approaches, ACT police are warning us that more Canberrans than ever have been caught speeding. They say, rightly,...
Best of Canberra 44

Senator Zed Seselja has brushed off a challenge for the Liberals' No 1 spot on the Senate ballot for the...
Food & Wine 23

Things are about to get a whole lot cooler in Dickson with the opening of Spilt Milk Gelato Bar today...
Community 21

Five new and improved playgrounds in Torrens, Higgins, Waramanga, Richardson and Narrabundah will give Canberrans more areas to play and...
News 20

In its 50th year, the Botanic Gardens sees green shoots despite COVID-19 shutdown

Six things to do around Canberra this weekend (4-6 January)

@The_RiotACT @The_RiotACT
The Canberra Show has been cancelled for the first time since 1943 after organisers conceded it was impossible to coordinate around COVID-19 https://t.co/gZa4d8MWPC (35 minutes ago)

@The_RiotACT @The_RiotACT
Remember when documents were individually written on typewriters? Snedden Hall & Gallop reflect on 60 years of law and life in the capital https://t.co/kNV6civ77e (2 hours ago)

@The_RiotACT @The_RiotACT
Canberra's restorative justice scheme has achieved a 98 per cent satisfaction rate since its expansion two years ago https://t.co/F8Bt1MV7gz (4 hours ago)