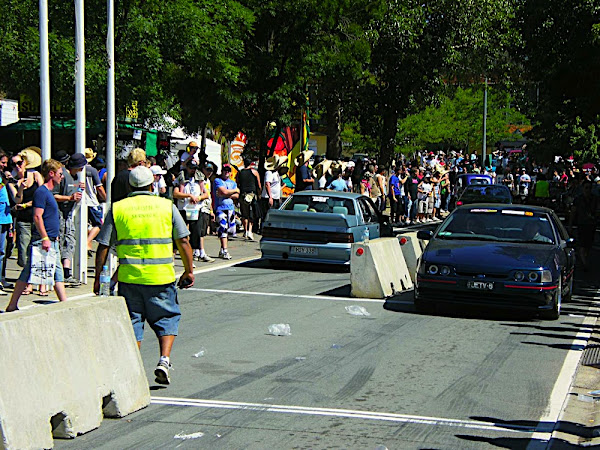 Territory And Municipal Services are letting you know what roads they’re closing to make way for Summernats:

The ACT Government wishes to advise motorists and other road users that alternative traffic arrangements have been established for Summernats XXV, from Thursday 5 January 2012 to Sunday 8 January 2012.

These arrangements have been developed in conjunction with the Australian Federal Police, Exhibition Park in Canberra, Summernats management, Territory and Municipal Services and residents from Watson and Downer.

— Stirling Avenue will be closed between Northbourne Avenue and Aspinall Street in Watson.
— The speed limit on Flemington Road, between Northbourne Avenue and Sandford Street, will be reduced to 40 kilometres per hour.
— Delays are expected on Flemington Road. Travellers are advised to use Gungahlin Drive for travel to and from Gungahlin. Alternative routes will be signposted.
— Delays are also expected on Northbourne Avenue near Exhibition Park in Canberra. Motorists are encouraged to use Antill Street and Wakefield Avenue as alternative routes.
— Additional parking will be available north of Exhibition Park in Canberra, with access via Sandford Street or Wells Station Road.
— Phillip Avenue and Swinden Street will remain open to traffic at all times.
— An ‘Alcohol Free Zone’ will be created along Aspinall Street, Stirling Avenue, Northbourne Avenue, Lonsdale Street and the Federal Highway, as well as short sections of Wells Station Road, Phillip Avenue, and the parking area north of Exhibition Park. These zones will be signposted.
— ‘No Parking’ and ‘No Camping’ signs will be erected on both sides of Northbourne Avenue

In addition they’ve also provided details of what the City Cruise will mean to other road users.

The Cruise takes place between the Summernats entrance to Exhibition Park in Canberra (EPIC) off Federal Highway down Northbourne Avenue through to the intersection with London Circuit and then back to the starting point.

“The Summernats City Cruise, which is a convoy of 200 of the best vehicles from the event, promises to attract a wide range of Canberrans and visitors,” said Senior Manager, Traffic Management and Safety, Roads ACT, Rifaat Shoukrallah.

“It is important the Cruise takes place safely so the Federal Highway and Northbourne Avenue will be closed in sections as the convoy passes. The Cruise will travel at 40 kilometres per hour with a police escort involving a lead car, trailing car and supporting motorcycles.

“Roads ACT will also coordinate the traffic lights for the Cruise to ensure it proceeds smoothly. Access will be provided to emergency service vehicles if necessary.

“The best vantage points are in the City and at the Summernats entrance near the old Shell service station site, Stirling Avenue, and the Federal Highway. These locations are where the vehicles will be travelling at their slowest so people have more of a chance to see them.

“There is also parking available in the City and parking is available at EPIC via Old Well Station Road, off Federal Highway.”

We published more info on the cruise back in December

Kate Tricks - 1 hour ago
Bad news for those of us looking to buy... View
bj_ACT - 5 hours ago
Chewy I’m surprised by your views based on some of your previous comments over the years. I’m not sure that property Deve... View
Sandra Noonan - 6 hours ago
No no no !!!!! View
Opinion 7

HiddenDragon - 2 hours ago
"The ACT needs home-grown solutions that fit with its culture and the aspirations of its people and origins, not imported min... View
Gabriel Spacca - 5 hours ago
Well I feel sorry for those who are coming here to escape the anthills of Sydney and Melbourne. The current government is try... View
Marc Edwards - 6 hours ago
Ian Bushbell is about 50+ years to late View
News 11

HiddenDragon - 3 hours ago
In light of this - https://the-riotact.com/act-government-systems-not-rated-to-receive-security-classified-information/430823... View
Acton - 7 hours ago
You hope. I admire your trust in the efficiency and perpetual good will of an indulgent government. However, you have forgott... View
Acton - 7 hours ago
“Those who would give up essential liberty to purchase a little temporary safety, deserve neither liberty nor safety.” Be... View
Food & Wine 14

Roslyn Russell - 7 hours ago
My little granddaughters will adore it! View
News 4

chewy14 - 9 hours ago
Yeah these claims about human rights are ridiculous. Whilst I support voluntary euthanasia, our elected government does not.... View
Acton - 11 hours ago
I agree with our need for easy access to voluntary euthanasia as decided by the individual and not vetoed by anti-choice reli... View
Property 2

realist - 10 hours ago
Isn't it funny that Ben Ponton has taken so long to speak up. Can the government impliment changes before the Developers comp... View
Motoring 1

Kerry Crampton - 11 hours ago
We live just inside the Queanbeyan border (behind the Airport motel) and we hear the noise from the speedway but it doesn’t... View
News 27

mf64 - 16 hours ago
Plus Canberra has the worst most self entitled drivers around. Having driven all over the country and around the world by far... View
Property 8

Shayne Borger - 18 hours ago
Just what we dont need. Another bland box of units. How unimaginative View
show more show less
*Results are based on activity within last 7 days

Time for Summernats to change gears again, or go

@The_RiotACT @The_RiotACT
Meet Linus, a cat who has had a tough start to life and is at @rspcaact waiting for a special owner who has plenty of time & patience to help him settle into his forever home https://t.co/o8YjOFw68q (4 hours ago)

@The_RiotACT @The_RiotACT
Here’s your chance to snap up a delightful, established home in a sought-after area with views galore and close to schools, shops & childcare https://t.co/ers2rZj1x7 (5 hours ago)