Sunchaser and the Wayward Orchestra CD launch at Transit, a review

It’s a rare CD launch which sees the venue evacuated, but that’s what we got last night for the lunch of Sunchaser and the Wayward Orchestra’s new CD.

Sure it was almost certainly burnt toast or pot smoking in the upstairs YHA, but getting the appliances out is always a bonus star for any party in my book.

First up on the light was Lavers who last month entertained us with the WordPlay video. A very beatle-esque sing songwriter who makes music which makes the world a brighter place.

Having gotten to know his stuff online it was great to catch the live performance which did not disappoint.

Putty on the other hand opened with a somewhat defiant “We play other people’s songs” before giving us a high quality covers set. Giving Lily Allen a hard rock treatment worked surprisingly well and their selections were nicely off-beat.

Then it was time for the main event.

They’re a complete rock band with the violin providing a slightly Jethro Tull touch. If you’ve ever had a grudging affection for Bon Jovi then you’ll love seeing Sunchaser.

They reminded me why the world needs rock bands.

An excellent night all round. 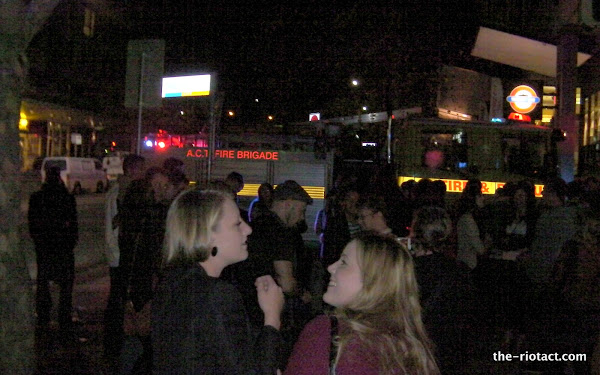 Robyn Baer - 29 seconds ago
Hopefully the wording is written better than their previous amendments. View
M.J. Leonard - 4 minutes ago
I highly recommend being an ex-landlord. View
Birna Ursidae - 5 minutes ago
A great idea, but 4 weeks is too short. Good luck finding a place in canberra in 4 w eeks View
Property 7

Debora Gyllien - 29 minutes ago
and yet some of us who have been living here for decades and searching for support have found none. View
Perry Alopex - 3 hours ago
Nice! I can only imagine that trying to settle in Canberra would be pretty rough. It's got one of the highest costs for livin... View
Peter Manna - 3 hours ago
They will think this is paradise lol View
News 48

Nestled among picturesque gardens, this stone and timber cottage could have been lifted straight from the pages of a children's storybook....
Lifestyle 29

A few weeks ago, fellow columnist Ian Bushnell wrote about the proposed residential/aged care development on Cotter Road that will...
Opinion 24

@The_RiotACT @The_RiotACT
Barb Shannon, from #Bookham, near Yass, may have made hundreds of unique, embroidered heirloom #blankets during the past 50 years, but each one is #special to her and she hopes they will all be loved for life https://t.co/9rxXUtE0yH (8 minutes ago)