Supporting the ‘business of doing good’? 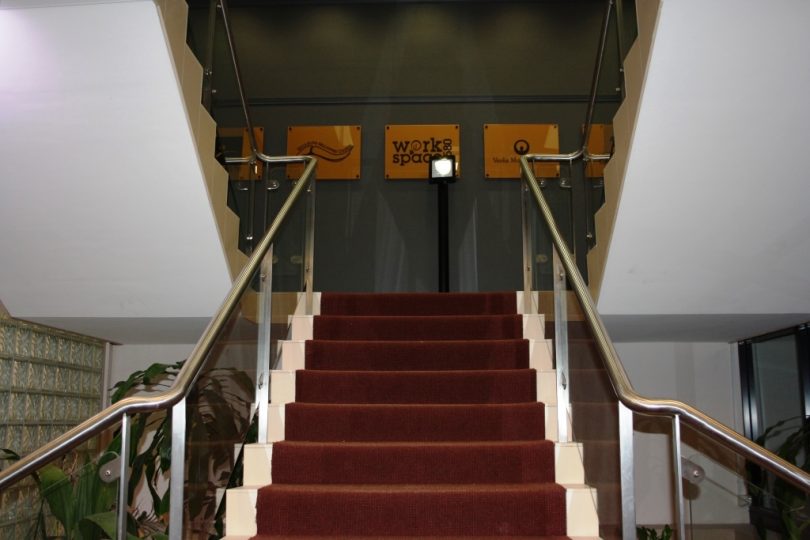 The lift to the first floor has been out of operation, hampering efforts to generate income from NDIS activities, according to Community Plus. Photo: Supplied.

The co-working and community hub WorkSpace2580’s outstanding rent problem has highlighted the differences between those who see the benefits of supporting social enterprise towards viability and those who don’t, and the politics in between.

WorkSpace2580, located in Goulburn, was officially launched in November 2016 on the back of ‘Smart Hub’ policies from the Federal and NSW governments which saw benefit in supporting the concept of co-working and telecommuting.

WorkSpace2580 is administered by registered charity Community Plus and offers co-working tenancy for social and community services, a community college, business incubation and meeting and conference facilities. It’s also home to community groups and, most recently, the Goulburn Energy Information Hub – a place for residents to access free and independent energy information, including ways to save on energy bills.

The hub, which is now fully tenanted with clients such as mental health, low income housing, regional arts, the Business Enterprise Centre, and Fair Trading representatives, was established in a Goulburn Mulwaree Council-owned building, with the council initially signing on as a “foundational partner” and supporting the hub in its start-up phase with a rent-free period of some 10 months.

In early June 2018, following a request from Community Plus to keep the rent at $45,000pa and submissions on why it had fallen behind in the rent, Goulburn Mulwaree Councillors voted instead to maintain the existing rental schedule and issue a formal letter of demand for $26,000 in back rent.

Community Plus, which is also an NDIS provider, has put forward multiple reasons for the rental shortfall and requests for the moratorium on rent rises, including a lift that hasn’t worked for most of the year, hampering its ability to generate income from NDIS activities.

“The model we’re operating under is that we can only rent a certain portion to business and about 40-50% is rented to social enterprises, the community college and meeting rooms,” Community Plus Board member Dick Kearins said.

“We’ve been working hard to host workshops and meetings, and now have the factual information which will give us a basis to discuss with council going forward. If the social outcomes we are getting are sufficient, hopefully, the council will arrive at a decision on how that matches with community objectives.

“Social enterprise is equally as important as the developer paying commercial rent. Governments are asking more and more of the not for profits to deliver social services and they should be supporting that through infrastructure provision.” 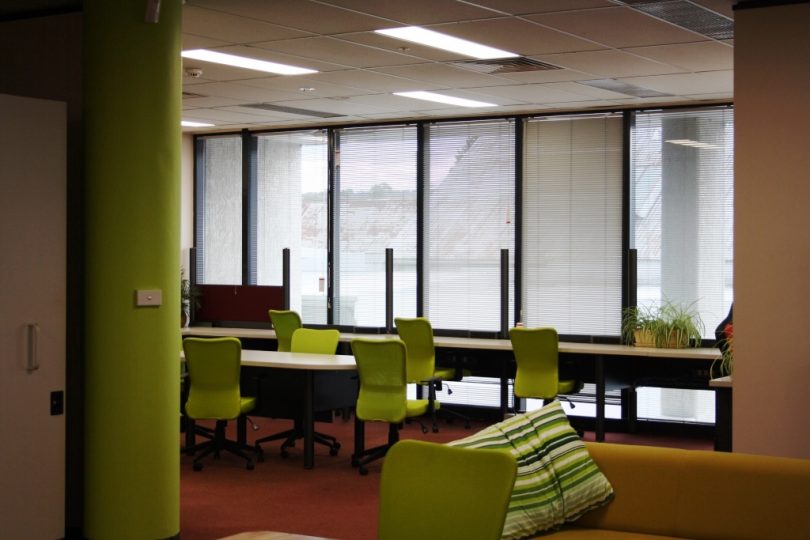 In its startup phase, Community Plus volunteers renovated the building, to design a vibrant co-working and meeting space. Photo: Supplied.

Mr Kearins, a former drought support worker with the NSW Government, said initiatives like WorkSpace2580 take time to build. “We have a growing use of our services. The social needs of the community are not always addressed by governments. We also offer a community space where people can talk about issues, exercise their voice and participate,” he said.

The hub is managed by Community Plus volunteers with the help of one full-time employee.

Going forward, Goulburn Mulwaree Council wants to see a new business plan so it can assess the ongoing viability of the social enterprise. It has also suggested Community Plus take on the ground floor which may assist in income generation.

“I can’t pre-empt any future decisions but from the information provided to us [at this stage], it doesn’t give us much confidence in the ongoing viability of the hub. We will need a review to establish if it is viable in the future,” Goulburn Mayor Bob Kirk said.

“As the owner of the property, we’d be looking for a commercial rent. When WorkSpace2580 was initially established we had no other prospects and it was a timely opportunity. We provided a social consideration through the rent-free period and subsidised rent.”

However, the council was disappointed that its original expectation that WorkSpace2580 would generate income [to pay rent] wasn’t realised. “Clearly there is now reason to review and see if it can continue on.”

Despite being a ‘foundational partner’ when the hub was launched, the Mayor said there wasn’t an operational partnership between the council and Community Plus beyond a seat at the Community Plus Board meetings as the building’s landlord, and the provision of concessional rent.

While the council was preparing to undertake a Social Plan next financial year which might assist in establishing levels of social need, with a consultant likely appointed in September 2018 and work beginning thereafter, the new WorkSpace2580 business plan would be needed before that.

“I’m hopeful there’s a solution but remembering the property is owned by the community,” Mayor Kirk said.

Mayor Kirk said he personally supported WorkSpace2580 but couldn’t speak for other councillors. “That is a question for them.”

In the meantime, social enterprises continue to receive support from government and the corporate sectors. Where there are gaps in public services or the market is not viable or profitable enough for the private sector, social enterprises often provide effective solutions for service delivery to the marginalised and the poor.

If Goulburn Mulwaree Council was faced with a commercial demand for the WorkSpace2580 building, it would need to weigh up its level of support for the social enterprise. Hopefully, a solution can be found that doesn’t end the fledgeling not for profit as it establishes itself in the ‘business of doing good’. 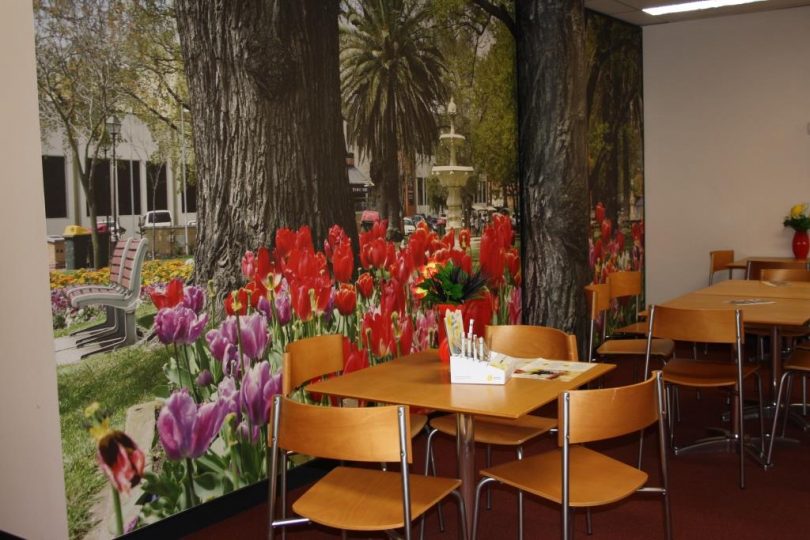 chewy14 - 14 minutes ago
The Federal Government has paid out hundreds of billions of dollars of support payments throughout the pandemic so to claim t... View
Opinion 64

nobody - 46 minutes ago
Yes, it can be a struggle to go from renting to buying, a really large hurdle for many, and still better than renting in the... View
phydeaux - 1 hour ago
Agree, chewy. Perhaps it is not a warm concern for the availability of rental properties that drives some investors but a fea... View
JS9 - 2 hours ago
In what world should a tenant have to provide a reason to leave? If they break during a fixed term contract they have require... View
News 1

chewy14 - 52 minutes ago
Once again the ACT government has been forced kicking and screaming into doing something they should have always been doing i... View
News 1

Brianna - 53 minutes ago
This is going to be a disaster for so many vulnerable people who live in the city and it's closer surrounds. I know for a fac... View
Business 10

@The_RiotACT @The_RiotACT
The #ACT - and all states and territories - desperately need help with soaring pandemic #health costs, says Member for Canberra @AliciaPayneMP. Why won't the #PM come to the party? https://t.co/1fKDHkCUKS (11 minutes ago)

@The_RiotACT @The_RiotACT
The ACT has recorded 24 new #cases of COVID-19 in the past 24 hours. There are currently 18 patients in ACT #hospitals with #COVID, including 10 in intensive care https://t.co/lw638QcjVh (17 minutes ago)