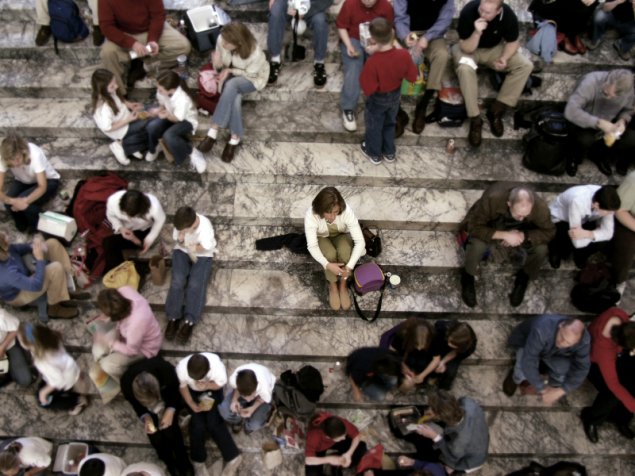 Australians want a future based on community wellbeing but believe one dominated by individualism and free enterprise is the more likely prospect.

That is the finding of a new survey produced by the Australian National University (ANU).

Preliminary results found 71 per cent of randomly selected participants preferred the community wellbeing option. However, they also thought this was our least likely future, with just 17 per cent believing this is where Australia is heading.

“The majority of Australians preferred a community-wellbeing outcome – a future based on sustainability and community,” said senior researcher Ian Chambers from the ANU Crawford School of Public Policy.

“However, most people thought we were heading in the opposite direction, towards an individualistic economic growth based society, and which is also where they believed we are now.”

The most likely future people saw for Australia was free enterprise, which is based on economic growth at the expense of equity and environmental quality. More than one third of respondents felt that this was where Australia was likely heading.

The research used a scenario planning approach, which involved people being presented with a range of possible futures and choosing the one they want to work towards. The approach was famously used by South Africa to successfully transition from apartheid to the Rainbow Nation.

“What South Africa did was to gather together their leadership and work out the scenarios where they could potentially end up. And not all the options were attractive,” Chambers said.

“The scenario they chose was called Flight of the Flamingos, where everyone rose up together. It’s a very powerful image that was cascaded down through political, business and community groups to become part of the national agenda. It helped the transition towards the outcome of what became the Rainbow Nation.

“What is unique, however, about the Australian study is that participation is opened up to all Australians – an approach which has not been undertaken before on a national scale,” he said.

Participants can still take part in the Australia: Our Future, Your Voice Survey at http://www.anuscenarioplanning.com

I’m surprised it needed research. However, it’s good to have the numbers to back it up.

The level of disillusionment is evident everywhere we look and the desire to belong is utterly basic, not just to humans, but to elphants, dogs, cows, primates . . . lots of creatures. It’s just how we are.

jam - 6 hours ago
The tram is more easily accessed by more people as it encourages dense development within its reach. It isn’t really possib... View
bj_ACT - 7 hours ago
The issues with the Bus route changes and the loss of bus stops for Tuggeranong in 2019 were obvious to anyone with half a br... View
Winkie Wee - 8 hours ago
I'm lucky in that I live within a short walk to either the R4 or R5 buses. I use the bus quite a bit unless both of us need t... View
Breaking 4

jam - 6 hours ago
That said, though, bikes are required to slow to around 10km/h before crossing - a bike crossing at the otherwise speed limit... View
jam - 6 hours ago
It is not “bugger all inconvenience” it actually makes a big difference when it is your commute! When I drive past a cros... View
liberalsocialist - 10 hours ago
What a disgrace. And while in no way taking away from this cowardly act, I have come from NSW where we are told to dismount a... View
News 161

Jimbo Lambert - 7 hours ago
Areas in Gungahlin haven't been mowed for at least 6 months! How hard is it to use our high rates money to employ some more m... View
Jimbo Lambert - 7 hours ago
Randy Goldberg you mean 6 months later? You must live in a more affluent area than Gungahlin, as it seems we have been alloca... View
Frank Arnold - 9 hours ago
Ohhh myyy Goddd !...Crooked pavements!...pot holes in our roads!...and now it's long grass !!!! FFS we hardly had any 3/4 yea... View
Community 6

kenbehrens - 10 hours ago
That makes no sense. Your comparisons are 20-25 years apart. The "new" bus route takes longer because it services a bigger ar... View
bj_ACT - 10 hours ago
Not sure about the adding 10 minutes to the 333 journey by changing to go past College St and UC. The change Only added 1.2km... View
michael quirk - 15 hours ago
Yes,but it is by no means certain that light rail stimulates urban redevelopment more than BRT. Much depends on design of the... View
News 1

ANU to pause classes as unis respond to COVID-19