TAMS all ready to deal with your festive filth 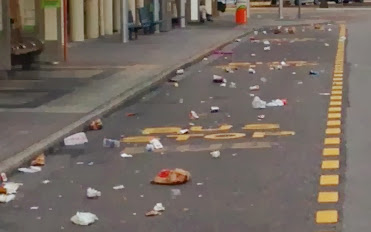 Territory and Municipal Services are making sure we all know that their cleaners are raring to get stuck into the horrific mess thousands of revelling drunks will leave behind tonight.

While you are out in town this New Year’s Eve, spare a thought for the city cleaners who will set their alarms before 5 am on New Year’s Day to clean up from the previous night’s celebrations.

“Our cleaning teams, including our street sweeper and garbage trucks, will start their work day at 5 am tomorrow, and while the rest of Canberra is fast asleep, they’ll be working through the aftermath from New Year’s Eve,” City Operations Manager, Steve Amos, said.

“New Year’s Day is the biggest day of the year for our staff, who every year find themselves cleaning large volumes of litter, bottles, broken glass, vomit and other

sights that most people wouldn’t want to go near, let alone physically remove.

“I urge people to be mindful of their actions when celebrating tonight. Place rubbish in the bins provided and treat public assets with respect. Our staff work hard to maintain these assets to a high standard.

“There are 40 rubbish bins and another 40 recycling bins in the city and we expect them all to be filled. An additional 10 waste and 10 recycling bins will be supplied to cater for extra visitors coming into the City for the New Year celebrations. This amounts to about 2000 kilograms of rubbish to be collected. We also expect our street sweepers and staff to pick up about another 500 kilograms of rubbish.

“Nine staff members will take to the streets blowing rubbish, street sweeping, picking up litter, steam cleaning the pavement and cleaning toilets in the city area.”

Canberra CBD Limited is also doing their part by installing five portable urinals in the centre of town. Canberra CBD Limited Chief Executive Officer, Jane Easthope, said the urinals will be located at Bunda Street, Petrie Plaza, the taxi rank at the bus interchange, opposite King O’Malleys and Verity Lane.

“The urinals will help keep the centre of town clean this holiday season, and will assist the police by letting them focus on duties other than discouraging public urination. They will be in place from 7 pm until 7 am, from 31 December 2013 to 5 January 2014,” Ms Easthope said.

[Pictured is the detritus of a normal Thursday night in Civic]

I was near the Pot Belly in Belco a few weeks back, and was astounded to see an apparently sober bloke whip out his tiny little unit and start pissing against a wall in the street while calmly chatting to a couple of friends (one of whom was female) as though it was no great thang at all. There would have been toilets in the pub less than 50m away, but he just couldn’t be bothered.

I wonder do ATM cameras run all the time, or just when someone is using them for their intended purpose.

“There are 40 rubbish bins and another 40 recycling bins in the city and we expect them all to be filled. An additional 10 waste and 10 recycling bins will be supplied to cater for extra visitors coming into the City for the New Year celebrations.”

If they expect any bins to be filled then they haven’t provided (big) enough bins.

so they are putting out an extra 10 bins in Civic for new years. Something tells me this ACT GOVERNMENT IS BROKE and busted arse.

Im glad they have put this note out. Something sensible coming out from the local council is a rare thing, so I do tip my hat to them on this occasion.

Cheryl Boyd - 7 minutes ago
Kangaroos will go into water if they have been bitten by a snake. Hope it was taken to a vet to get checked over. View
News 120

Craig Webb - 25 minutes ago
Greg Donoghoe thats well and truely faster than an old plastic cab with a gardiner straight 8 in it! View
Greg Donoghoe - 30 minutes ago
Yvoir Hingee maybe you need to give it a try now. Very enjoyable way to travel to Sydney. No traffic to put up with & very co... View
Tim Vandartel - 1 hour ago
Time to get back on track. High speed trains please. View
News 34

Carol Treneski - 29 minutes ago
The team at the gym and pool worked with my Dad for years. He had Parkinson’s and Lewy Body Dementia. They helped Dad retai... View
Opinion 12

Neil Chandler - 32 minutes ago
Peter Bee true, but they produce some great players and there is a fanatical enough fan base that it would be a worthwhile ve... View
Rollersk8r1 - 2 hours ago
Quite happy as a GWS member. In normal times it’s an ideal arrangement. Four games a year at Manuka (1 pre-season), plus AF... View
Ben Jones - 4 hours ago
No one will go apart from the die hard fans. Until they start winning and the whole of the ACT become fans overnight. View
Opinion 1

David John Hourigan - 2 hours ago
John Slow too many round abouts...! View
Matthew Robinson - 12 hours ago
Would be great but no way the government would support it. View
Opinion 20

@The_RiotACT @The_RiotACT
A Canberra man has died after being struck by a car from behind while walking in East Queanbeyan on Wednesday night https://t.co/rM6J2eFG0o (2 hours ago)