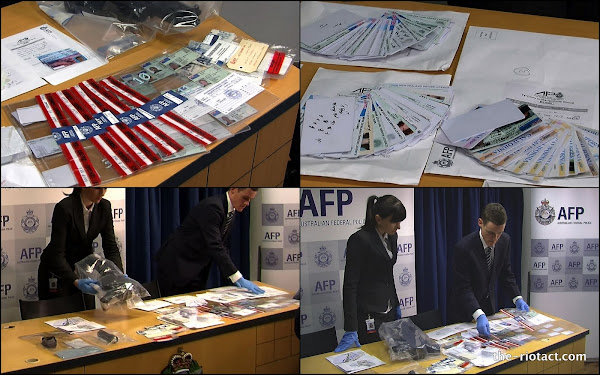 Around 10am yesterday, police executed the warrant on a Turner apartment after a lengthy police investigation into counterfeit identification cards being presented at licensed premises around the ACT.

During the search, officers located New Zealand and Californian driver’s licences and proof-of-age cards along with paraphernalia and electronic equipment that was used to manufacture the bogus identification.

“This seizure is significant as we believe it’s predominantly teenagers under the age of 18 who purchase counterfeit identification cards for the purpose of obtaining alcohol and entering licenced premises.

An 18-year-old Turner man will be summonsed to face the ACT Magistrates Court at a later date.

Really? I’m not a rider, but I didn’t know this.

Really? How many more road rules dont you know?

Sergeant Batterham! That sounds like she hits fellow officers.

This is obviously just another in the long list of joke names that the AFP media people are dreaming up to cover the real identities of their operatives. She joins the magnificently named Sgt Shakeshaft and his team of enforcers. 🙂

Really? I’m not a rider, but I didn’t know this.

this investigation resulted from collaborative intelligence-gathering between police and private security.

What’s that involve? We outsource that too now?

And they can park where they want. And they get free spit in the face from junkies as part of their job.

Sergeant Batterham! That sounds like she hits fellow officers.

So tasers are illegal? Is that because they are dangerous to use on people? But police can use them on youngsters that are no threat or old people and that’s fine?

So tasers are illegal? Is that because they are dangerous to use on people? But police can use them on youngsters that are no threat or old people and that’s fine?

Deref - 7 hours ago
It'd be handy to know the vaccination status of those in hospital and the ICU. View
Property 20

Futureproof - 8 hours ago
Vote early, vote often. Will voter ID solve this?... View
kenbehrens - 9 hours ago
Stephen, as it turns out, School ID cards are a thing, if you work in a school you'll need a Working with Vulnerable People's... View
franky22 - 13 hours ago
I take it that the 55 senators are part of the nutjobs still claiming that the election was stolen from Trump ? View
News 2

Frank Spencer - 8 hours ago
Leaf litter makes the best compost. View
TimboinOz - 9 hours ago
Leaf-litter!!! At home? Buy a 2 or 3 layer worm-farm and start gardening. Even if it's just for salads until Autumn. And, eve... View
News 3

Futureproof - 8 hours ago
The roundabout at Monaro Highway/Isabella Drive is particularly dangerous with the height of the grass. You should be able to... View
Capital Retro - 9 hours ago
That would be tantamount to the cosseted cyclists in Canberra who get free bike tracks and then complain that they can't use... View
bigred - 10 hours ago
Of course, both sides of politics could encourage interested and motivated residents to "adopt a patch" and reduce the total... View
News 1

Helen Roberts - 9 hours ago
I welcome FOGO in Cook. We are more able to separate food scraps. For example I have found that the coffee capsules we used t... View
Scott Harvey - 10 hours ago
Most people don't buy organically grown fruit and veg therefore the scraps aren't organic either. You cannot add non organic... View
Lifestyle 19