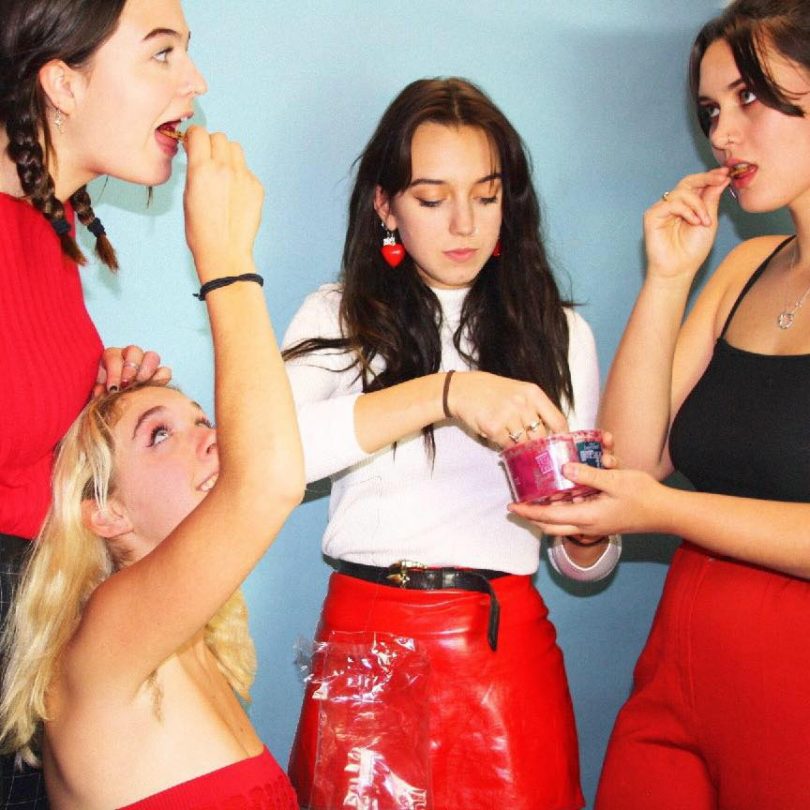 Teen Jesus & The Jean Teasers are four girls from Canberra who have been making waves in the capital over the past year or so. With a sound steeped in alternative rock, their music embodies aspects of a number of bands who would have broken up before the members of Teen Jesus could form memories.With a number of shows on the horizon out of Canberra and slots supporting interstate headliners, we thought it was time to get to know Teen Jesus a little bit better. So here are their top ten songs from a decade they were born too late to experience first hand but (as you’ll see) know all too well.

This is probably the song that the whole band can collectively agree to be our pump up song before gigs. It’s the type of song you can’t feel bad after listening to, and a song you can’t not scream to. Highly recommend listening whilst on the Tuggeranong Parkway with the Kambah breeze through your hair. Big yes from us. – Neve

This is the kinda song you’d want to listen to before a maths test and get way too pumped. I used to listen to it on the bus to school in the morning and would show up feeling like a lil’ rebel ready for some sociology – highly recommend. – Scarlett

Much like the Mazzy Star hit I often chuck this bad boy on when I feel like being dramatic. You could either cry or feel extremely fulfilled while listening to this tune. I personally enjoy listening to it while eating four packets of Mi Goreng and having a good cry. – Anna

Put this song on if you wanna clean your room in under three minutes. I assure you it’ll make you move more efficiently than ever before. Try it and let me know how it goes. – Neve

If you feel like you want to have a good cry or look out the car window in the rain and pretend you’re heartbroken or feel like you’re dressed completely in red velvet in a Parisian hotel or do an oil painting or have some red wine or wear some silky pyjamas then LISTEN TO THIS, IT’LL DO THE TRICK! – Scarlett

Vivid memories of my dad headbanging to this song. An unlikely occurrence since he usually just does the ol’ foot tap. Not sure if it’s a good memory or an awful one but the song has still managed to stay in my top ten so I guess that’s all that needs to be said? – Neve

When I was just a young Anna I would sing my little heart out in the shower to this beautiful banger, which was surprising considering my taste in music, at the time, was definitely not poppin’. This song is one that has stuck by me through the years though and the one I will forever love. – Anna

Whenever listening to this I feel like I could be gearing up for some kind of post apocalyptic space age cowboy battle. I don’t really understand it but it gets you damn fired up and feeling like a kool thing. – Scarlett

2. GUERRILLA RADIO – RAGE AGAINST THE MACHINE

This song brings me back to young tiny me dancing my heart out on the kitchen table, and being so happy that I was allowed to say “shit” in the chorus and not get in trouble. – Jaida

Imagine a 7 month pregnant woman front row of the National Convention Centre in 2000 ready to scream along to The Cure. That was my Mum, and I was the lil thing inside her. Hearing Robert Smith sing, “I never thought tonight could ever be this close to me” as a foetus obviously had some affect on me and I don’t think I’d love music as much today if my mum had decided to stay in and read some parenting books instead. So thanks Mum. I love ya. – Neve

Someonesmother - 21 hours ago
Gee why does this not surprise me? Look who the developers are. 43 car parks in a completely congested street, using Canberra... View
News 17

@The_RiotACT @The_RiotACT
If you're an emerging theatre maker, where do you go for experience? Three local creatives say the Canberra Youth Theatre artists' residency has been invaluable for them https://t.co/wBFdnL4Ls5 (23 minutes ago)