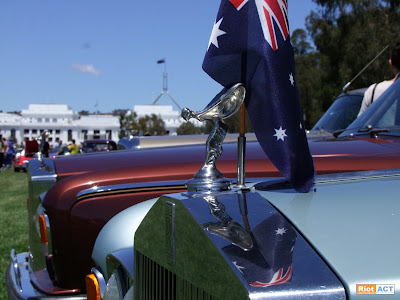 With the weather fine, what better way to spend a Sunday morning in the city than popping into the lawns in front of Old Parliament House for a look at the “Terribly British” car show?

Even if you only have a passing interest in cars this one is amazing. The multiplicity of vehicles knocked out of sheds up and down the length of the British Isles is staggering.

For every half-remembered old name on show there’s another completely novel.

It was a huge show of automotive exotica with the hood ornaments alone worth the effort to go down and see.

A large crowd was having a great time while we were there. Well done to the organisers and everyone involved.

There’s a slideshow below for those who like their pictures of cars without scantily clad women draped over them.

Auto Italia doesn’t need ‘perks’ so why should a British car exhibition? No TVRs?

There was one black TVR there. Its in JohnBoys photos.

I also saw an Bullet MX5 which is even more random.

When if first came out, they reckoned the MX-5 was designed to look very much like an Lotus (can’t remember the model, sprite? don’t think that’s right) so maybe that was the thinking behind that. It looked kind-of like a British car.

Auto Italia doesn’t need ‘perks’ so why should a British car exhibition? No TVRs?

Seriously though, what beautiful cars they are! A few interesting ones that I’d never seen before too which is great. It’s awesome to see such lovingly maintained cars.

Too bad I missed that.

Nice to see the rad DB5 in attendance again. That’s such a beautiful car.

I went out for a look. Was a pretty good showing really, lots of variety, and not the usual 100 MGBs.

Here’s a few pics. I only had a nifty fifty as I’d lent lenses to friends. Made taking car pics tough with a cropped sensor body.

H1NG0, trouble is the Germans reckon the MINIs are British. MINIs have shown at the German Autofest after twisting enough arms.

Seems everybody loves MINIs except the organisers of car shows, haha.

There was one there Holden. I noticed it turned up later in the day. Although strictly it is BMW, therefore German, I’ll let it slide 🙂 I also saw an Bullet MX5 which is even more random.

Shame there was no new MINIs there. :p

It was a hard weekend 😉

Wish I could have gone, or even taken the Morris along…

It was a very nice day. Good crowd, great weather, and a nice selection of cars. My old man had his car there, a red Triumph TR4A. Nice photos JohnBoy.

But if it was a “terribly British day” why wasn’t it raining?

That’s a great collection of photos you took JohnBoy.

Ahh yes, i should wear my shorts more often.

May I concur. Wonderful day, some magic machinery, including some the Poms would consider rare. My choice was the Healey Works team ‘Big Healey’ which I believe contested the Mille Miglia in the 60’s. Absolutely beautifully restored, and worth a Kings ransom.

Thank you for the piccy of my car. Our group are not strictly Pommy, but are replicas of Lotus cars of the 60’s.

There’s a slideshow below for those who like their pictures of cars without scantily clad women draped over them.

Robyne Mitchell - 41 minutes ago
I prefer my place, as this one looks very boring really. No art or craft of any value anywhere. View
Helen Morgan - 2 hours ago
Will my $750 cover it ? View
Kerry Jackson - 2 hours ago
I’ll take it, just wrap it up for me View
News 2

Rauny Worm - 1 hour ago
Tom Porter ..there is a youth specific faculty but only for emergency treatment not for therapy. There are still so many gaps... View
News 6

Jacqui Donegan - 2 hours ago
Cooleman Court could (again) be a wonderful local precinct ... but it’s a mess - no parking, scrappy streetscaping, and a s... View
Angela Davey - 5 hours ago
Why not open shops in Coombs. Wright Denman Prospect before building more car parks. View
News 9

Conrado Pengilley - 3 hours ago
And how big is your risk fund on your investment property? View
Ashley Latimer - 14 hours ago
Imagine investing in property and not having a risk fund set up lmao View
Community 1

Chris Kubank - 5 hours ago
Lauren Ogden well said View
Randy Goldberg - 12 hours ago
Domenic Fabbo three to six months or more. Basically, it'll be in place (if not stronger measures) until there is a working v... View
Lauren Ogden - 14 hours ago
It is a shame that these stories are provoking aggressive reactions when we could be working together as a community. "One st... View
News 18

Karen Feng - 17 hours ago
If the kid is 12 and below. you can entertain them (keep them out of trouble) with art, jewellery making, balloon arts, fort... View
News 25

Mark Valerius - 18 hours ago
Woden isn’t empty of APS. Plenty still work there. View
Craig Elliott - 19 hours ago
We can't afford this at this time....put it on ice. The Government has just spent how many millions which we don't have View
Jesse Mahoney - 19 hours ago
His solution doesn't sound better because he has no understanding of community planning. View
Opinion 20

Stephen Mee - 20 hours ago
Peter Norton reskill. Will not be enough jobs in that sector due to oversupply and no call. View
Business 1

Maria DeAngelis - 20 hours ago
Lisa Lamah, might be handy info to share with your barista downstairs? View
show more show less
*Results are based on activity within last 7 days

@The_RiotACT @The_RiotACT
Canberrans are finding new ways to commemorate Anzac Day this year, from a locally-produced podcast featuring Redgum’s classic I Was Only 19 to the #AnzacAtHome campaign https://t.co/cDx372L1xS (14 minutes ago)

@The_RiotACT @The_RiotACT
Doing take-away? Your next meal comes with free parking as part of ACT Government moves to support businesses affected by the coronavirus pandemic restrictions. Check where the new 15-minute windows will be https://t.co/zLX3lNSXoy (2 hours ago)

@The_RiotACT @The_RiotACT
This private Bowral estate now for sale complete with lofty manor, park-like gardens & spectacular views offers the perfect opportunity to get away from it all https://t.co/iWo3ePeFC4 (5 hours ago)