Tharwa Bridge gets its ornamental trusses 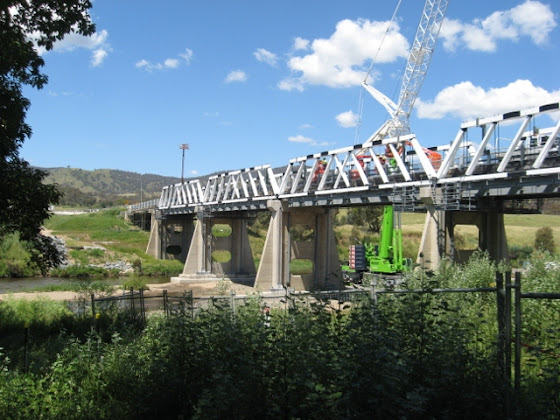 AndyM has sent in this pic and the following note:

Some photos I took of Tharwa Bridge yesterday with the trusses being replaced. They are no longer load bearing but hang on the side as a façade. This completes this phase of the rebuild. The next phase is to replace the deck, which will require the bridge to be closed again. This is expected to take place in January. Should be an interesting exercise, as it appears the deck is being built on the east side of the bridge and will somehow be placed onto the bridge as a whole.

Its great to see that they are going back up. However, I think you’ll find that the trusses are quite functional. My understanding is that they were specifically built by the NSW RTA to allow the bridge to meet the load bearing capacity required for T44. The steal framing under the bridge is supposed to be temporary and was put up to get the bridge open quickly for light traffic and to support the bridge while the trusses were off. Check out http://www.arenco.com.au/images/projects/Tharwa-Bridge-Restoration.pdf.
Additionally, if the trusses were not functional, that would be against the conservation management plan for the bridge
http://www.cmd.act.gov.au/__data/assets/pdf_file/0009/148509/Tharwa_Bridge_CMP_reduced.pdf

I’m sure there was more stuff on the TAMS website 12 months ago regarding the different stages of restoration, but I can’t find it now.

The old trusses are all chopped up and are being stored not far from the Namadgi Visitors centre.

Well let’s hope that once the bridge is completed that Tharwa can gain some momentum as a tourist destination. It’d be nice to see it established as an equivalent to Hall or Gold Creek rather than a ghost town.

I really like the idea that this bridge is being restored. That being said it would be a whole lot more worthwhile if Tharwa had some attractions for Canberran’s to use as an excuse to venture over said bridge.

There used to be but the mess about with the bridge, it was closed for months the first time ensured that they did not survive.

Cuppacumbalong was a beutiful place to go for a Sunday lunch.

I too am overjoyed to see the bridge restored, we had some wedding photos taken on the bridge itself. It’s goo to see it restored to it’s former self.

What a stupid idea. Hope the residents of Tharwa are hanging there heads in shame.

Would have been better to have built a copy of the Coat Hanger, IMHO. More tourists.

definitely new – the old ones were chainsawed.

According to TAMS they are “replacement” trusses, which infers they are not the originals.

Old ones restored I believe.

Are the trusses new, or have they restored the old trusses?

I really like the idea that this bridge is being restored. That being said it would be a whole lot more worthwhile if Tharwa had some attractions for Canberran’s to use as an excuse to venture over said bridge.

Michael White - 4 minutes ago
Shayne Borger it was a green who responded. Not labor 🤷🏼‍♂️ View
David Ward - 8 minutes ago
She should have publicly apologised after the first speeding offence and not done it again. Most people can accept a single i... View
Edgar Sharp - 8 minutes ago
Why not? At least copping the fine for an otherwise insignificant and easily hidden crime proves she isnt corrupt.... View
News 16

Mark Dando - 24 minutes ago
I don't get the level of coverage here of the views of these self-appointed 'guardians'. If the comments on this and the prev... View
Liam Matthew - 48 minutes ago
There is not significant community disquiet about the proposed development. Calling yourself the Guardians of something doesn... View
HSewell - 3 hours ago
Genuine question: why should we pay attention to a self-appointed self-named group like the "Lake Burley Griffin Guardians"?... View
News 1

jamied - 2 hours ago
The chickens finally came home to roost, I suppose. The audacity of uni management to ask for government bailouts in order to... View
News 2

Acton - 4 hours ago
Will resisting arrest constitute assault against a police officer? What if you resist arrest while at a peaceful demonstratio... View
Gregg Heldon - 6 hours ago
It's the ultimate disrespect, isn't it? And should be treated as such. The real question is, will the court protect those who... View
News 1

Arety Kr - 4 hours ago
why only the hospitality sector? All sectors have been hit hard, especially mine in beauty.... View
Business 7

Warwick Alsop - 4 hours ago
I don't disagree necessarily, although we do still have a guaranteed full week of work that isn't just cancelled on a whim by... View
Archie Mac - 8 hours ago
The amount of young people in Canberra who are given an unpaid ‘trial’ needs to be investigated too View
Opinion 2

Adam Briscoe - 7 hours ago
Must be some sort of election on the cards. View
News 17

John Elliott - 16 hours ago
I live within 100 metres of the Establishment and I don't see a problem. So many people are whinging and complaining. The bui... View
News 3

Property behemoth Geocon has been accused of putting profit before children's lives by refusing to compromise with the YMCA Early...
Business 7

A groundbreaking decision by the Full Bench of the Federal Court is likely to have significant implications for any employers...
*Results are based on activity within last 7 days

@The_RiotACT @The_RiotACT
The ACT Government has called on Opposition police and emergency services spokesperson Guilia Jones to quit the portfolio after it was revealed that she lost her driver's licence earlier this year for speeding https://t.co/c4M9OznyBX (44 minutes ago)